Angelina Jolie and Her Kids Enjoyed a Movie With Cambodian Royalty

Angelina Jolie and producer Rithy Panh (center) chat with actors before holding a press conference ahead of the premiere of their new film "First They Killed My Father", on Feb. 18, 2017 in Siem Reap, Cambodia.
Omar Havana—Getty Images
By Helen Regan and Mike Miller / People

The actress was joined by her children — Maddox, 15, Pax, 13, Zahara, 11, Shiloh, 10, and twins Knox and Vivienne, 8 — at the world premiere of her passion project, First They Killed My Father in Siem Reap, Cambodia. Her sons Maddox, who was born in Cambodia, and Pax were both involved in the film’s production.

Presented at the Terrace of the Elephant in the ancient Angkor Wat temple complex, the film was screened to both Hollywood and Cambodian royalty, as the country’s King Norodom Sihamoni and Queen Mother Norodom Monineath Sihanouk were in attendance, along with a host of senior government officials. Jolie and her family posed for a photo with the royal family at the premiere.

The premiere of First They Killed My Father, was screened in the temple of the elephant terrace, a couple of kilometers from where Jolie shot her breakout 2001 filmTomb Raider. As the heat of the day wore off, local families picnicked along the banks of a nearby lake, while monkeys scavenged the area for scraps of food.

For those without invitations, the entrance to the premiere itself was blocked off by a handful of police and security guards. Several white minivans drove past taking attendees to the screening.

Cheany Nem, 30, from Kampong Cham province came to the premiere with her husband, mother, niece and nephew after hearing that locals could see the film for free. But they were not allowed in because they don’t have an invitation and access was tight due to the attendance of the royal family.

“Me, like a lot of young people, want to know what happened during the Khmer Rouge,” Nem said. “My mum is older so knows the story. I heard from her what happened but i wanted to know for myself.

“When I was young I learned about the Khmer Rouge from school. Learning about it made me feel hurt and that makes me want to come see the movie.”

Rady, who works in Siem Reap, agreed about the importance of seeing the movie.

“Of course its hard to talk about what happened, but a movie can say it,” Rady continued. “I hope for the future that our country will teach the youth the history of Cambodia so they know what happened.”

Nem said that Jolie was obviously a big draw for seeing the film but added:

“Its an important memory for every Khmer person. Its important for young people to learn about the Khmer Rouge. They want to know”

Earlier in the day, the Oscar winner made her first public appearance since she filed for divorce from Brad Pitt, when she attended a press event for the film.

At the press conference, Jolie said she thinks of Cambodia “like a second home,” adding, “Maddox is happy to be back in his country.”

Based on the autobiography of the same name by Cambodian human-rights activist Loung Ung, a friend of Jolie’s, First They Killed My Father tells the true story of the devastation inflicted on Cambodia by the Khmer Rouge communist party in the 1970s.

“I read Loung’s book many years ago,” Jolie said at the press conference. “It helped to open my eyes to what was going on the world.”

She added, “I wanted to tell the story to through the eyes of the child’s point of view, the love of a family, to show the beauty of the country and understand what Maddox’s parents may have gone through.”

More than two million people, out of a total population of seven million, were killed during the purge, including Ung’s father, mother and two sisters. “The heart of it is Loung’s story, it’s the story of a war through the eyes of a child, but it is also the story of a country,” Jolie said in a promotional clip for the film.

Jolie used only Cambodian actors, many of whom are the survivors or children of the survivors of the genocide. In addition, Jolie insisted only their native Khmer be spoken throughout the film. Jolie, Ung and the producers hoped the experience of making the film would be cathartic for those who participated.

The actress’s love affair with Cambodia began after she filmed Tomb Raider in the country in 2000. Not long after she was finished with production, she returned to Cambodia as a volunteer for the U.N. refugee agency, UNHCR, for which she is now a special envoy. In 2002, Jolie adopted her first child, Maddox, from a Battambang orphanage.

“He was the one who just called it and said he was ready and that he wanted to work on it, which he did,” Jolie recently told The Guardian of Maddox’s role in the film. “He read the script, helped with notes, and was in the production meetings.”

Jolie’s second-oldest son, Pax, was also involved in the production. In 2015, Jolie told PEOPLE, “Pax is doing a lot of the stills,” adding, “The whole movie is from a child’s point of view.”

First They Killed My Father will be released globally via Netflix later this year. 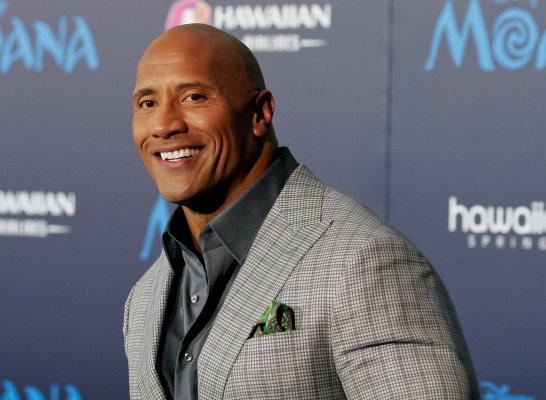 The Rock Just Wants to Save the World All the Time
Next Up: Editor's Pick