The World’s Oceans Are Losing Oxygen. Here’s Why That’s a Big Problem

Coral reef in Seychelles that is degraded due to global warming.
RainervonBrandis—Getty Images
By Melissa Chan

Oceans across the globe are slowly losing oxygen, which poses a major problem for every living marine animal and underscores the serious consequences of climate change, researchers say.

A new Nature study published this week found that oxygen levels in worldwide oceans have dipped by more than 2% in the last half-century. While the change may seem small, scientists say even subtle shifts in gas levels can alter entire ecosystems.

“It’s significant,” said Rob Dunbar, an Earth science professor at Stanford University. “Anything with a gill is going to care and notice.”

Dunbar, who studies climate change in the tropics and Antarctica seas but who was not part of the Nature study, said the oxygen drop can have rippling effects across the deep blue. Larger marine animals, like sharks, require more oxygen, especially to carry out high-energy activities like feeding. Dropping oxygen levels create “no-go zones” for some sea creatures, leaving them fewer areas to eat and reproduce, Dunbar said.

“It’ll be harder for organisms to make a living in the ocean,” he said.

Coastal economies and fisheries, already stressed by overfishing and pollution, also take a hit when oceans lose oxygen. The gas-level shift poses “potentially detrimental consequences,” according to the Nature study, which was conducted by the Germany-based GEOMAR Helmholtz Centre for Ocean Research. It can be difficult for scientists to determine the consequences for specific ocean animals, because they are also affected by human activities, including fishing and dumping.

The study’s authors mapped out global oxygen levels in oceans between 1960 and 2010. The 2% figure accounts for oxygen levels overall, but the researchers found many areas had more than a 4% decrease. The North Pacific Ocean and the Arctic Ocean saw the largest drops in oxygen volume.

The researchers suggested global warming played a major role in the change.

Gas levels in the ocean are controlled in part by the temperature of the sea. Gases — like oxygen, nitrogen and carbon dioxide — disappear from the ocean when water heats up. “If you boil water to make tea, one of things you’re doing is de-gassing that water,” Dunbar said. “It’s just based on simple chemistry.”

The same idea can be applied when thinking about massive bodies of water. Dunbar said oxygen will leave oceans as the water becomes warmer from a hotter atmosphere. “Global warming is happening in the oceans,” he said. “The fact remains, independent of the cause, oceans are heating up.”

Temperatures in global oceans have risen more than a half-degree Celsius between 1960 and 2010, according to a 2014 Science study.

Dunbar warned of dire consequences to sea life should the pattern continue. “Let’s say it’s another 2% in another 30 or 40 years, that will have a demonstrable impact,” he said. “It’s the whole food chain that gets affected by oxygen.”

“To me, that’s striking,” Dunbar added. 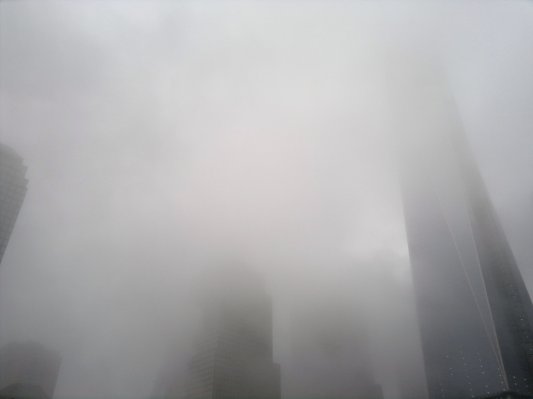