Two of the most left-leaning candidates in France’s presidential election are in talks to join forces, in what would be the latest twist in a turbulent race for the Élysée Palace.

“We are having discussions and we will continue to have discussions,” Socialist Benoît Hamon said of Friday of his potential team-up with the Left party’s Jean-Luc Melenchon, Reuters reports. Hamon’s party is currently in power in France, but his candidacy has been hampered by the historic unpopularity of current President François Hollande.

Polls suggest that a potential pair-up between Hamon and hard-left Melenchon might help them get through to the May 7 run-off, likely to face the far-right candidate Marine Le Pen of the National Front Party. According to an Opinionway-Orpi poll published Friday, Le Pen is expected to get 26% of the votes in the first round of the election in April, while Hamon and Melenchon would respectively get 16% and 13%.

Hamon told Bloomberg that he was also in discussions about a single candidacy with the Green Party’s Yannick Jadot. “What we need to discuss is the conditions under which we could come together and who in the end could — between Yannick Jadot, Jean-Luc Melenchon and myself — be best suited to embody the Left at the second round of the French presidential race with a program that could be shared” Hamon told Bloomberg.

The French presidential race has been upended by an ongoing scandal over allegations that former frontrunner François Fillon of Les Republicains paid his wife with public funds for work she did not do. 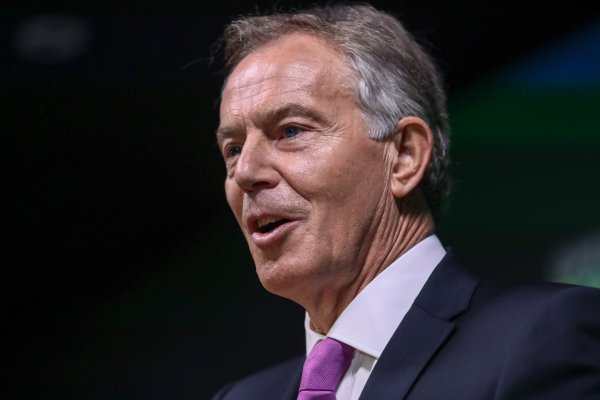 Tony Blair Urges British Voters to 'Rise Up' Against Brexit
Next Up: Editor's Pick