In the vein of popular music’s male heartthrobs—think ZAYN, Justin Bieber and Nick Jonas—TOTEM‘s catchy songwriting and electro-infused R&B melodies seem destined to soundtrack sleepovers and populate radio playlists. But the New York-based singer-songwriter, who’s teetered on the edge of fame with a run of Spotify viral hits and 2016’s bittersweet “Bubblegum,” has remained more of an enigma than your standard pop idols.

“I’m 30, I’m educated, and I’m brown,” explains TOTEM, who is Indian-American. “I don’t fit the usual archetype the music industry knows how to sell.” Yet his easy mix of soaring falsetto and grounded bass gives “Up & Down,” premiering here on TIME, undeniable mainstream appeal. Not to mention the universality of the subject matter: the highs and lows of a roller-coaster affair. “I’m alright, not recovered / It got me high to try and love her,” he croons. In the comedown from Valentine’s Day, music like this is a welcome reminder that not all love is what it seems.

Below, listen to the new track and read what TOTEM has to say about the song, his curious blend of Boyz II Men and Phil Collins and navigating the narrow parameters of the pop industry.

I don’t know many people who haven’t been taken advantage of romantically at some point. “Up & Down” is about being in the middle of this tug of war between pleasure and pain.

Is there a particular personal experience this song draws on?

How would you describe your music and your genre? Did you always expect to be creating this sound, or if not, how did you end up where you are?

I used to think of myself as R&B and then pop, but I think the truth is somewhere in between. One of my good friends was venting to me about the shortcomings of the word “pop,” and I agree. Because something can be popular and not pop, and vice versa. And in the musical moment we’re in, I’m just making stuff I like. If it’s popular, that’s awesome. But it’s 2017. I’ve realized as I’ve grown as a writer that genres only hold you back. Can you cross Boyz II Men and Oasis and Phil Collins? Because I guess it’s that.

You tend to keep a low, enigmatic profile, which can be both a challenge and a boon in celebrity-saturated, image-obsessed pop. Why do you prefer to stay out of the spotlight? Is that going to change?

A ‘totem’ is symbol that has an important meaning in a society. Music is a ritual, and it’s always been my goal as a musician to convey meaning through song, and in that way I see myself as a totem. We are all creatures of this world and so we all share these universal instincts and experiences. The point is to tap into that story and make you feel or relate to something real. So I shouldn’t matter—what you get from the song should matter. We worship a lot of people who haven’t done anything. As a songwriter, I’m never going to have the tangible impact of a teacher or a fireman, but at least I can try to create art that is about more than me.

What do you think sets you apart from other young male pop/R&B artists? Can you speak to your experience as someone who’s not the traditional white guy in the space?

I represent a worldview that is not heard from a lot in popular music, that’s true. I think that gives me an advantage in a way. But I’m 30, I’m educated, and I’m brown—I don’t fit the usual archetype the music industry knows how to sell. So that can be a challenge, but I think people are smarter than that these days and with artists like ZAYN and The Weeknd having real success, it shows there’s room for diversity in pop. Also, the things I write about are universal—love, loss, growing up—these are experiences I think anyone can relate to. 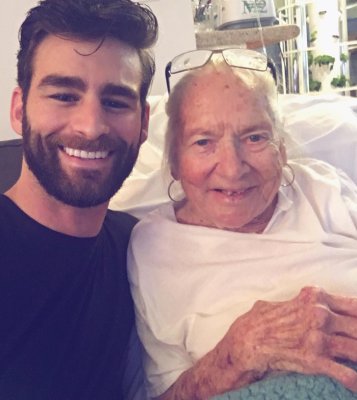 'She Was a Beautiful Human.' Man Who Cared For 89-Year-Old Neighbor Says Goodbye
Next Up: Editor's Pick