Republicans Have Big Plans. President Trump’s Problems Are Stalling Them

Beset by internal bickering and disoriented by mixed messages from the White House, the Republican-controlled Congress is struggling to move on the top items on its agenda.

It has been a rocky start to the new year, and seven weeks into the legislative session and days before Congress’ first recess, there are few accomplishments or ready plans to point to, on issues from the health care law repeal, tax reform, infrastructure or other issues.

The lagging pace is due in part to Democrats’ unprecedented targeting many of Trump’s Cabinet nominees, with Senate Minority Leader Chuck Schumer slowing the confirmation process to a crawl.

But many Republicans are also pointing to a series of controversies from the White House—Michael Flynn’s resignation as National Security Advisor, revelations about Cabinet nominees and Andy Puzder’s withdrawal as Labor Secretary, and Russia’s interference in the election—as distractions. Others say they there has been little guidance from President Trump’s legislative team.

“It’s dysfunctional, as far as national security is concerned. Who’s in charge? Who’s making policy? Who’s making decisions? I don’t know of anyone outside of the White House that knows,” said Republican Sen. John McCain of Arizona. “Where’s the involvement of Congress on other things?”

“We’ve got about three cooks in the kitchen,” said Republican Sen. Pat Roberts of Kansas, who said he is eager for the President to start focusing on trade negotiations. “What’s talked about is all political. We have some real problems to address I hope we can get some people on board and get cracking.”

“We’ve got plenty to do but it’s certainly not helpful to have the distractions,” said Republican Sen. Jeff Flake of Arizona.

Trump has yet to sign any major legislation after nearly four weeks in office, despite his party’s control of both houses of Congress. Eight years ago, when then-President Obama similarly presided over a unified Democratic government, he signed into law an $800-billion stimulus bill and the Lily Ledbetter equal pay bill after his first month.

Still, Republicans deny that the pace of legislation has been slower than expected.

“We didn’t say we’d pass infrastructure and Obamacare and tax reform in the first month. That’s not a realistic timeline, so we didn’t say that would be the case,” said David Popp, communications director for Senate Majority Leader Mitch McConnell.

GOP members also point to the repeal of last-minute regulations by the Obama Administration. “We have, however, begun to roll back onerous regulations that will save billions of dollars and help free up the economy,” Popp added.

Still, Republicans are dealing with internal divisions on a slew of issues, from healthcare to taxes and trade, and some splits among Congressional Republicans, and with the White House are looking increasingly thorny.

Despite promising a speedy repeal to the Affordable Care Act, Republicans are putting forward conflicting plans over what parts of the law to repeal and when. Conservative members of the House are pushing for an immediate end to the law, while moderates in the Senate are urging a more careful approach.

Republican Sen. Rand Paul of Kentucky and the conservative House Freedom Caucus, including Reps. Mark Meadows, David Brat and Mark Sanford, have called for revoking the Affordable Care Act’s Medicaid expansion to the states. (Fifteen million more people are covered by Medicaid since the Affordable Care Act went into effect, according to the Department of Health and Human Services.) Some Republican governors and moderate Senators have opposed an immediate Medicaid expansion repeal, or support a more gradual plan.

There is also disagreement about how to structure tax relief for healthcare users, and there are arguments about how quickly to set in motion a repeal. Conservatives support an immediate repeal that parallels a 2015 bill, but moderates are wary.

“Nothing less than what we sent to the president in 2015. We all voted on it it passed the House and the Senate. Now that we have a Republican in the White House they’re going to vote differently?” said Meadows, chair of the House Freedom Caucus. “They have to defend that back home. I can’t defend that.”

“I think we need to move expeditiously to get things going and I’m hopeful that our leadership is doing exactly that,” he added.

But the timeline for repealing the Affordable Care Act is looking increasingly long. “When the president said something last week to the effect that this healthcare reform could spill over into 2018, there was a lot of hyperventilating around here about that statement,” said Rep. Charlie Dent, a moderate Republican from Pennsylvania. “But I thought it was a fair and honest comment and it was probably realistic.”

In addition, the sometimes conflicting messages from the White House have made it difficult for members to write the healthcare repeal. Trump has called for an immediate repeal, but has also said repeal and replace must be ready at the same time, and said that “everybody” would be covered by a new plan. His Health and Human Services Secretary Tom Price refused to make the same commitment.

After repeated calls for tax reform, House Speaker Paul Ryan has argued in support of a tax plan that includes a border adjustment tax, but that measure is not palatable to many key Republicans in the Senate. Some members believe that the border adjustment measure, which Trump floated several weeks ago, will raise prices on products in the United States.

“A tax on imports is a tax on things working folk buy every single day—and I’m not talking about caviar and champagne. I’m talking about T-shirts, jeans, shoes, baby clothes, toys, groceries,” said Republican Sen. Tom Cotton of Arkansas on the Senate floor on Wednesday. Cotton told TIME he has not had any discussions with the White House over the proposal.

Many Republicans supporting the border adjustment measure are adamant that it must be part of a tax reform compromise, a difference that could stop any legislation in its tracks, considering that few if any Democrats are likely to support the bill.

“If you really want to have fundamental reform this is going to be only path I see to doing it,” said Republican Rep. Devin Nunes of California.

On infrastructure, Trump has promised to make $1 trillion in road rebuilding a priority, but Democrats led by Schumer will refuse to work with him unless the better portion of it is paid through direct investment from the federal coffers.

Key Republicans say they have yet to have real policy discussions with the White House on their issues.

“I really haven’t,” said Republican Sen. Jim Inhofe of Oklahoma, the chair of the transportation and infrastructure subcommittee, when asked whether he has done any planning with the White House. “We’ll be very active but I have not done it yet only for the simple reason that there’s too much other drama competing with it right now.”

Inhofe said he visited the White House on Tuesday, but it was during the Flynn controversy and he did not have a concrete discussion about infrastructure. “It’s very distracting,” Inhofe said. “We have an obstructing Democrat Party that’s trying to string these things out and that makes it more difficult.”

Compounding the delay is Schumer’s tactical slowdown of Trump’s cabinet nominees, which has clogged up the Senate’s schedule and made debating other measures difficult. The Senate Minority Leader has managed to slow the pace of confirmations to a trickle, with fewer Cabinet nominees confirmed than any other presidency in more than 100 years.

“It’s pretty hard to get to legislation as long as we’re working on nominations,” said Sen. Majority Whip John Cornyn.

But Democrats are not hesitating to take potshots at Republicans for the halting start to the year.

“Every day they’re obsessed with the developing scandal around Flynn and contacts with the Russian government it looks less likely they’ll get a repeal of the Affordable Care Act or a trickle-down tax cut through Congress,” said Democratic Sen. Chris Murphy of Connecticut. “It’d be a risky bet to believe that this Administration is going to get radically more functional over the next four years.” 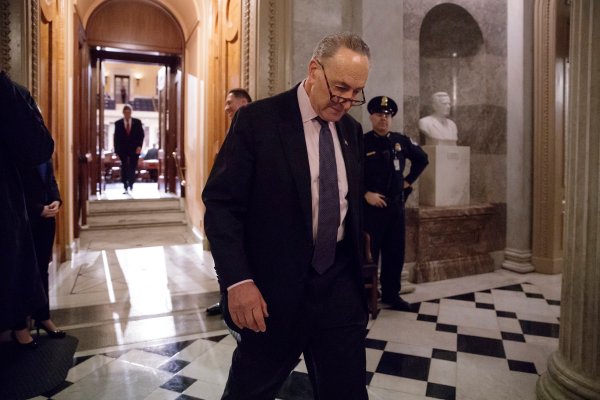 Democratic Leader Says He's Unlikely to Be Able to Work With Trump
Next Up: Editor's Pick