Read President Trump's Most Trumpy Comments From That Press Conference

President Trump held a loose, combative press conference that touched on his views on Russia, the first weeks of his Administration and his views on the media.

After several press conferences in which he only called on conservative media outlets while avoiding tough questions on the firing of National Security Advisor Michael Flynn and other difficult topics, Trump spoke at length and then took questions from a wide range of reporters.

The subject of the hour-plus press conference was ostensibly his choice for Labor Secretary, Alexander Acosta, who was announced just one day after CKE Restaurants CEO Andrew Puzder withdrew his nomination, though Trump spoke only briefly on the nomination.

Here’s a look at some of the most interesting things he said at the press conference.

On the state of the country:

“As you know, our Administration inherited many problems across government and across the economy. To be honest, I inherited a mess. It’s a mess. At home and abroad, a mess.”

On the beginning of his Administration:

“I turn on the T.V., open the newspapers and I see stories of chaos. Chaos. Yet it is the exact opposite. This administration is running like a fine-tuned machine.”

“We’re becoming a drug infested nation. Drugs are becoming cheaper than candy bars. We are not going to let it happen any longer.”

On whether he would meet with the Congressional Black Caucus:

“I would. You want to set up the meeting? Are they friends of yours?”

On anti-Semitism in the United States:

“Number one, I am the least anti-Semitic person you’ve ever seen in your entire life. Number two, racism, the least racist person.”

On a Russian spy vessel that is off the U.S. coastline:

On misstating his Electoral College win at the press conference:

On his connections with Russia:

On Hillary Clinton’s “reset” with Russia as Secretary of State:

“Hillary Clinton did a reset, remember? With the stupid plastic button that made us all look like a bunch of jerks.”

On CNN’s coverage of him:

“I watch CNN, it’s so much anger and hatred and just the hatred.”

On whether stories about Mike Flynn’s resignation are “fake news”: 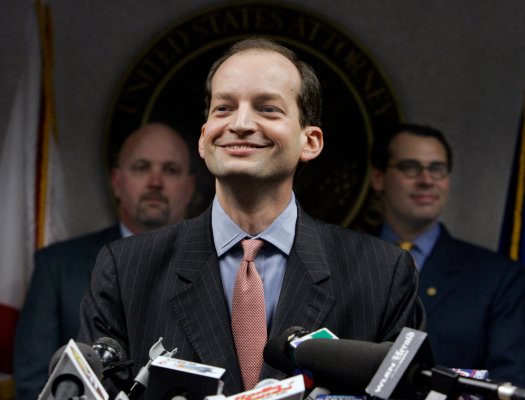