Donald Trump came to power on promises to upend the world order in America’s favor; one month in, he’s definitely shaken things up, but even some U.S. allies are left guessing where Washington is headed. Here then is a look at the state of relations with five traditional U.S. allies in the age of Trump.

Israel
Aside from Vladimir V. Putin, no world leader was more delighted with Trump’s shock election victory than Benjamin Netanyahu. The Israeli prime minister had a particularly strained relationship with Obama, primarily over Israel’s continued construction of settlements in occupied Palestinian territories—during Obama’s tenure, Israeli settlers in the West Bank increased from fewer than 300,000 to about 400,000. Riding a wave of optimism in the first two weeks of the Trump administration, Israel announced more than 5,500 new settlement housing units. The move was so aggressive that even Trump was forced to issue a press release declaring that new Israeli settlements won’t help the peace process.

But the reality is that Netanyahu might not be in power much longer; an anti-corruption case against him is picking up steam (Netanyahu is accused of accepting thousands of dollars in illicit gifts), and in a recent poll some 44% of Israelis said he should resign. Not that it really matters to the future of U.S.-Israel relations; these ties are structural, not based on individual personalities. How structural? Let’s put it this way: it was Obama who signed the $38 billion military aid deal with Israel that extends from 2019 to 2028—the largest such aid package in U.S. history. Talk of damage to U.S.-Israeli relations can be politically useful in both countries. The reality is much less volatile.

Canada
For Trump, Canada is like California—a highly developed economy with high-wage jobs and an ultraliberal electorate. Not exactly his preferred demographic, but there are a lot fewer fights here than with Mexico. It helps that America’s trade deficit with Canada is only a quarter of that with Mexico. So the goal for Prime Minister Justin Trudeau’s Washington visit this week was simple—smile, shake hands, talk about the things they agree on (trade cooperation, pipelines) and avoid the things they don’t (refugees, climate change). In that respect, mission accomplished—Trudeau’s nine-hour visit to the States, four of which he spent with Trump, yielded very little news. The highlight was that the Canadian side of the NAFTA deal would only be “tweaked.”

But Trudeau must walk a fine line. With Trump’s election, he has now become the posterchild of Western values—embrace of free trade, religious tolerance, concern for climate change, acceptance of refugees and so on. There will be a temptation for Trudeau to needle Trump in order to play to his liberal constituency. That wouldn’t be smart—3/4 of Canadian exports and 2.5 million Canadian jobs still depend on trade with the U.S.

Japan
Prime Minister Shinzo Abe’s trip to Washington last week made clear that if America has a “special relationship” with anyone in 2017, it’s Japan. Credit goes to Abe for that—while most other world leaders were still picking their jaws up off the floor in the days following the U.S. election, Abe acted quickly to visit the President-elect at Trump Tower. It was a move that instantly conferred credibility on Trump, and the President hasn’t forgotten it.

Abe is all-in on the Trump presidency, which makes sense when you consider China’s growing footprint in Asia and increasingly assertive behavior in the South and East China Seas. But Japan needs to make sure that headlines remain focused on Japan’s commercial relations with China, not its military posture, because Abe’s future—and Japan’s—depends on economic dynamism, not military might. That’s the continuing value for Japan of the 49,000 U.S. troops stationed there.

A United Kingdom outside the E.U. will be a less influential and thus less valuable ally to the U.S, but it was the election of Donald Trump which leaves the future of the “special relationship” very much in doubt. After all, 85 percent of Britons expressed “no confidence” in Trump as recently as June 2016. Whatever the British left may have thought of Ronald Reagan or George W. Bush, 85 is a big number. As of February 2017, half of British voters believe Trump to be “dangerous”; a petition to stop Trump from making an official U.K. visit has topped 1.8 million signatures on the government’s official petition site, and at its height was being signed by more than 1,000 people a minute.

May has stated unequivocally that Trump is still invited to visit, given that it’s “substantially in the national interest.” She’s not wrong—both May and Trump are committed to Brexit, and May needs all the friends she can get these days as she ramps up for what will be a grueling two-year exit negotiation with Brussels. Trump also needs more world leaders not named Putin on his side. That may be why Trump waited for May to leave Washington before immediately signing the controversial executive order instituting the (currently-defunct) travel ban, a move the British Prime Minister found difficult to defend.

Saudi Arabia
Then there are the Saudis, a long-time commercial partner if not exactly a like-minded ally. To date, the nicest thing Trump has done for the Saudis is to leave them off his controversial travel ban. Given that 15 of the 19 September 11 hijackers were Saudi nationals, that’s not nothing. It’s true that the U.S. relies on Saudi oil much less than it used to—in 2003, the U.S. imported 648 million barrels from Saudi oil fields. Thanks to the production revolution in the United States, that figure had fallen to 387 million barrels in 2015. That reality leaves the Saudis vulnerable.

Still, Trump’s open hostility toward Iran (Saudi Arabia’s archrival) is music to Saudi ears; the President and King Salman discussed Iran’s “destabilizing regional activities” in their first call. Trump’s apparent lack of interest in promoting respect for human rights in other countries will also be a relief.

The real question for the Saudis will come if and when the U.S. is hit with another terrorist attack. How will Trump respond? Will the Saudis be caught up in a wave of anger toward Muslims and Muslim countries? As with all things Trump, the answer is not at all clear. 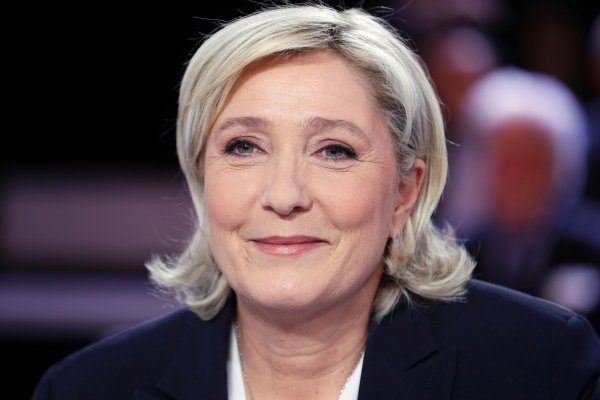 The 5 Candidates in the Battle Royale for French President
Next Up: Editor's Pick