Former Wall Street Journal columnist Christina Binkley posted pictures of Trump, 23, sitting alone during a show, captioning one: “Nobody wants to sit next to Tiffany Trump at Philipp Plein, so they moved and the seats by her are empty.”

But American actress and comedian Goldberg has come to Trump’s defense. Speaking on the View, she told the panel that she didn’t think it was right for other attendees to have moved away from President Trump’s daughter.

“Elle magazine’s senior fashion editor tweeted that she and other editors changed their seats so they weren’t near the first daughter Tiffany Trump,” Goldberg said. “There were also photos posted of Tiffany with empty seats next to her. You know what, Tiffany, I’m supposed to go to a couple more shows, I don’t know what’s going to happen, but I’m coming to sit with you.”

After offering to sit with Trump, Goldberg continued: “Nobody is talking politics — you’re looking at fashion. She doesn’t want to talk about her dad — she’s looking at the fashion!”

View co-host Sara Haines added: “It’s almost like we live in a time where people are saying because it’s a Trump, it’s okay to bully her. Because bragging about this online and saying, ‘Look, she has no one to sit with her,’ that’s being a mean girl just for sport.”

In response, Trump took to Twitter to thank Goldberg for sticking up for her: 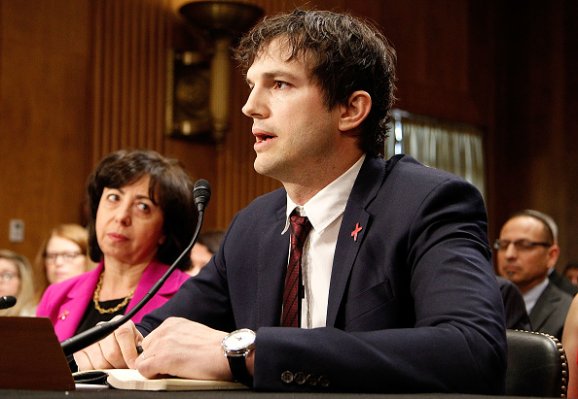 Watch Ashton Kutcher Give a Passionate Speech Against Human Trafficking
Next Up: Editor's Pick