The salads had been served and the steaks were on their way when Donald Trump’s aides surrounded the table. It was around 8:30 p.m. on Feb. 11, and the President was eating dinner with Japanese Prime Minister Shinzo Abe on the outdoor terrace of Mar-a-Lago, Trump’s private club in Palm Beach, Fla. They had just received confirmation that North Korea had launched a ballistic missile into the Sea of Japan, a violation of multiple U.N. Security Council resolutions and one of the first foreign policy tests of the Trump Administration.

The provocation was a surprise, but the bigger shock was the setting. While the President was briefed on the situation before dinner, according to a White House spokesperson, part of the drama played out in the middle of the Mar-a-Lago patio, more than 800 miles from the White House Situation Room and in full view of hundreds of club members and their guests. As a keyboard player sang classic hits in the background, White House aides relied on cell phones and candlelight to draft remarks and read briefing papers before a hastily prepared press conference starring the two world leaders. Stunned dinner guests posted snapshots on social media. “Holy moly!!!” club member Richard DeAgazio wrote on Facebook, adding a photo of a military aide carrying the nuclear football. “It was fascinating to watch.”

The surreal scene foreshadowed the unusually large role that the historic Palm Beach estate will play in its owner’s presidency. Every Commander in Chief finds respite from the pressures of the White House. Barack Obama favored the golf course and Hawaiian vacations. George W. Bush had his ranch in Crawford, Texas, while his father used the family compound in Kennebunkport, Maine. Richard Nixon liked to decamp to his vacation home in Key Biscayne, Fla. And Trump plans to spend a significant portion of his downtime at his private Florida resort.

The lavish oceanfront estate, to which Trump traveled for two of his first four weekends as President, is as much a part of his identity as his golden tower on Fifth Avenue or his star turn on The Apprentice. But Mar-a-Lago is not just another asset on his balance sheet. It is a monument to his wealth and status, and a restorative distraction for a restless President. For Trump, who rarely socialized in New York City and is now cocooned inside the White House, the sun-swept grounds are a sanctuary where he can bask in the adulation of paying members, who pepper the President for favors and make policy suggestions to his senior staff.

Such access doesn’t come cheap. The initiation fee at Mar-a-Lago, which aides have rechristened the “Winter White House,” is $200,000–double the price before Trump’s election in November. That doesn’t include the $14,000 yearly dues, or the annual food and beverage minimum, which have long been a major source of income for the President. In his most recent financial-disclosure statement, Trump reported earning nearly $30 million from Mar-a-Lago in 2015. Critics say profiting from the private members’ club raises ethical questions for the President. Hosting Abe for a weekend of golf and geopolitics was “a personal gift,” according to White House aides, who noted that the Japanese Prime Minister gave Trump a $3,800 gold-inlaid golf driver during the presidential transition. Allowing Abe to pay for his stay could have exposed Trump to a violation of the Constitution’s emoluments clause, which prohibits U.S. officials from accepting benefits from foreign governments.

At the club, Trump lives in a sectioned-off area of the 128-room mansion, but he’s easy to spot around the grounds. Most mornings he plays golf at the 27-hole Trump International Golf Club nearby. At lunchtime he likes well-done cheeseburgers in the main clubhouse. Mingling at formal dinners in the estate’s luxurious ballrooms, the President is part maître d’, part celebrity entertainer. He’ll pose for selfies with bridesmaids, swap tales of golf escapades with his business buddies and brag about the size of the shrimp at the buffet.

Trump doesn’t hobnob out of duty. Aides say it gives him a sounding board outside the Washington bubble. During the presidential transition, Trump set up shop in the formal living room, near a 1927 Steinway baby grand. Sitting in an armchair, with aides perched on couches, he would interrupt meetings to quiz passing members about possible Cabinet appointments. “I think it’s the crown jewel of his properties, and the property he’s most proud of,” says Newsmax CEO Christopher Ruddy, a longtime Trump friend and Mar-a-Lago member. “He’s in his own Shangri-la there.”

Turning the Florida estate into the Winter White House was the plan long before Trump became President. Mar-a-Lago–the Spanish name means “Sea to Lake”–was built by Marjorie Merriweather Post and opened in 1927. When the cereal heiress died in 1973, she willed it to the U.S. government, hoping the beachfront property, which spans the width of Palm Beach Island between the Atlantic Ocean and the Intracoastal Waterway, would become a retreat for Presidents and visiting dignitaries. But Jimmy Carter had little use for it–or the $1 million in annual upkeep–and it was returned to the Post family for sale. Trump quickly made a bid, offering $15 million, he wrote in The Art of the Deal. But Palm Beach didn’t want him. Locals recoiled at having the brash developer as a neighbor, and the Post family foundation hoped to find a more estimable buyer. The rest of the story has become Trump lore. As other offers fell through, the New Yorker put up successively lower bids. He even bought a nearby plot and threatened to build on it to obstruct the estate’s views. Finally, the foundation sold Trump the property for $8 million. “It may be as close to paradise as I’m going to get,” he wrote of the mansion in his book.

The clashes with the community continued. On the verge of personal bankruptcy in the early 1990s, Trump sought to subdivide the 17-acre estate into mini-mansions but was blocked by the town. Unbowed, he set out to undermine Palm Beach’s social order. At the time, local country clubs still excluded African-Americans, Jews and other minorities. Trump opened Mar-a-Lago to anyone who could foot the steep membership tab. “Mar-a-Lago is an extremely special place to President Trump,” says Michael Cohen, a longtime attorney for the President. “It’s an inclusionary place in a place that is exclusionary.”

Trump flew in celebrities, hosted concerts that violated local noise ordinances and racked up a six-figure fine for flying an American flag from an oversize pole on the property. He later settled with the town, but he placed a new, shorter pole on a man-made hill to boost its visibility from neighboring lots. As he would later do in politics, Trump relished in shattering venerable traditions. “There’s a conformity about this place that affects almost everybody,” says Laurence Leamer, a frequent guest at the club and the author of Madness Under the Royal Palms: Love and Death Behind the Gates of Palm Beach. “But not him.”

Over the years, Trump has filed three lawsuits against Palm Beach County alleging that air-traffic controllers directed the loudest jets over Mar-a-Lago, a mere 2½ miles from the main West Palm Beach runway. As part of a settlement, he gained the use of a parcel of land just south of the airport, which he turned into Trump International Golf Club. It took winning the presidency for Trump to prevail in his long-running fight with the airport. To protect the President, the Secret Service and the FAA have declared a one-mile buffer zone around the property, finally keeping the din of jet engines from marring his paradise.

Trump’s presence complicates travel to the club for its members. When he is there, their vehicles must endure a security sweep at an adjacent parking lot, and anyone entering the facility must go through magnetometer screening. Coast Guard boats patrol the waterway and the ocean beachfront. Secret Service officers stand at attention, and new cameras ring the grounds. But for some, the sense of exclusivity has only heightened the club’s appeal. Membership applications are up sharply, according to a person familiar with the matter. It helps that Trump has been a gracious host. On Feb. 4, during his first visit to the club as Commander in Chief, he and First Lady Melania Trump bucked convention by waiting in line with guests to enter the annual International Red Cross Ball. Surrounded by tuxedoed Secret Service agents, they swayed to a Bob Seger cover as guests sipped vintages from Trump’s Virginia winery. “I don’t think I’ve ever seen the room looking more beautiful,” Trump said during brief remarks at the fundraiser. “Perhaps at our wedding.”

The blurry lines between business, recreation and governing has made Mar-a-Lago the site of some odd moments. After the North Korea missile test, Abe and Trump left their dinner to deliver brief remarks to reporters in an ornate room decorated for the occasion with the two nations’ flags. Trump read a mere 23-word statement of support for Japan, declining to mention the missile launch or answer questions.

The President had other matters on his mind. He headed into Mar-a-Lago’s Grand Ballroom, where a wedding reception was under way. As guests shot videos with their smartphones, Trump grabbed a microphone and made an impromptu toast. “I said, ‘Come on, Shinzo, let’s go over and say hello,'” Trump joked, encircled by guests in formalwear. He kissed the bride on the cheek, shook hands with the groom and wished the couple well. “These are two great families,” Trump told the crowd. “They’ve been members of this club for a long time.” Then he paused for a punch line. “They’ve paid me a fortune.” 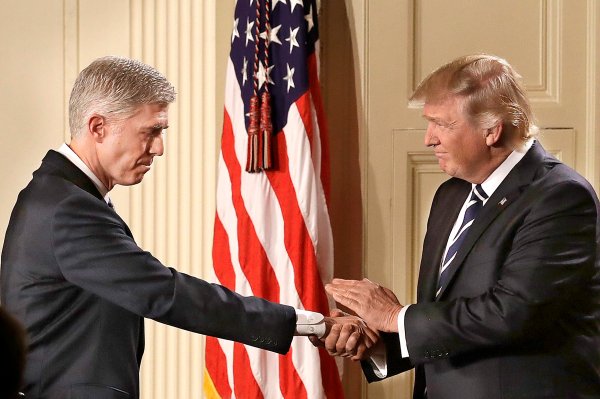 Trump's Supreme Court Pick Puts Democrats In a Bind
Next Up: Editor's Pick