The detention of a young undocumented immigrant who was granted protection from deportation under an Obama Administration policy has sent a “chilling” message to other immigrants, his lawyers said.

Daniel Ramirez Medina, 23, is currently being detained in Tacoma, Wash. He was arrested Friday by Immigration and Customs Enforcement officials who had come to take his father into custody. A team of civil rights lawyers filed a lawsuit in federal court on Monday, petitioning for his release.

“Originally, we really thought and hoped and trusted that it was a mistake, and we were hoping that the government would just release him,” Ethan Dettmer, a partner at Gibson Dunn & Crutcher and one of the attorneys representing Ramirez, told TIME. “Based on what we understand at this point, the government is not intending to release him and hopes to deport him.”

Ramirez was brought into the country illegally from Mexico at age 7 and has twice been granted protection under the Deferred Action for Childhood Arrivals program. He has a 3-year-old son and has never been convicted of a crime, according to the lawsuit.

ICE spokeswoman Rose Richeson said Ramirez was taken into custody “based on his admitted gang affiliation and risk to public safety,” the Los Angeles Times reported. The Department of Homeland Security doubled down on that accusation Wednesday, calling Ramirez a “gang member” who officials encountered “during an operation targeting a prior-deported felon.”

“This case illustrates the work ICE fugitive operations teams perform every day across the country to remove public safety threats from our communities when they encounter them,” the statement said.

But Ramirez’s lawyers refuted their claims of gang affiliation.

“He was pressured during his questioning to admit that he’s in a gang, but he didn’t [admit it]. He didn’t because it’s not true,” Dettmer said.

A court hearing has been scheduled for Friday, and Ramirez’s attorneys said they’re optimistic he will be released.

“The signal that his release on habeas corpus would send is a sigh of relief, but as of now, I think immigrants generally — including ‘DREAMers’ and DACA immigrants — are just holding their breath,” Harvard Law School professor Laurence Tribe, one of the attorneys who filed the suit, told TIME.

“I think this is a brutal, inhumane and unlawful seizure of a person, and it sends a terrifying and chilling message to the country,” he added.

Hundreds of undocumented immigrants have been arrested in the past week during raids by ICE officials, after President Donald Trump signed an executive order prioritizing the deportation of people who have been charged with or convicted of a crime.

Trump campaigned on a promise to crack down on illegal immigration, but he suggested in recent interviews that he would be more lenient toward DACA recipients. Immigrants’ rights advocates said Ramirez’s arrest suggests otherwise.

“Every one of our 11 million undocumented brothers and sisters are now a target,” Marielena Hincapie, executive director of the National Immigration Law Center, said in a press call on Wednesday. “The Trump Administration betrayed the promise that the federal government made to Daniel and everyone with DACA.”

Greisa Martinez, a DACA recipient and the advocacy director for United We Dream, said during the call that she doesn’t know if any other DACA participants have been detained across the country, but she said it’s a possibility.

“The reality is that right now we are on high alert,” she said. 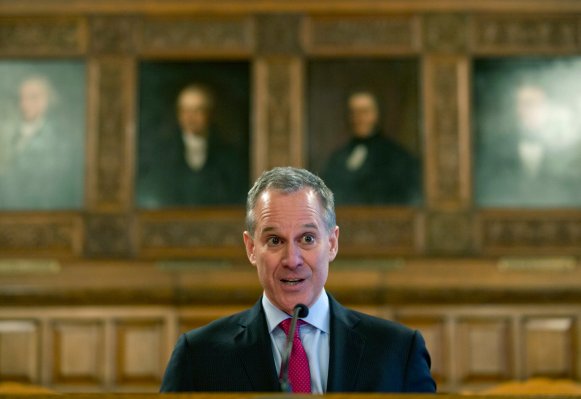