On February 20, 1862, Willie Lincoln, the beloved third son of the President, died of typhoid fever. In real life, he was interred in the Oak Hill cemetery. And his spirit, at least in the telling of the comic empath and acclaimed short-story writer George Saunders in his debut novel, entered a bardo — a Buddhist limbo, populated by ghosts. These specters travel around the cemetery. They believe they are not dead and hope to return to life as they knew it. Yet if they succumb to temptation or resignation, they know they will experience the “matterlightblooming phenomenon” and disappear to the afterlife in an indescribable flash and crack. “And for what?” one reasons. “You do not know. A most unintelligent wager.”

Willie’s ghost befriends a trio: the naked, excessively endowed printer Hans Vollman, who just wants a conjugal reunion with his wife; the many-eyed, -nosed and -handed Roger Bevins III, who swears he “changed [his] mind” about his suicide over his gay lover; and the fright-faced Rev. Everly Thomas, unable to determine his life’s great sin. Each encourages Willie to move along to the true afterlife, because the bardo is dangerous for children. That is, until they witness a marvel: a living loved one who does not abandon the deceased.

In the night, Abraham Lincoln has come to the crypt to cradle Willie’s corpse (a “worm,” to his son’s spirit). Lincoln says, and the disembodied 11-year-old hears, that he will come back again. This inspires the boy to linger. But watching Willie become consumed by demons, Vollman, Bevins, Thomas and their compatriots attempt to compel the President to return. To do this, they must form a union to free the boy from bondage. All rush into Lincoln’s soul. Rapists and victims. Good mothers and bad ones. Slaves and free men. They (possibly) enlighten Lincoln with their own experiences, and in return can hear his thoughts—enabling Saunders to mine the mentality of a President whose “magnanimity” William Seward once called “almost super-human” as he confronts an increasingly bloody civil war.

Read More: An Interview with George Saunders on his Novel, Trump and Compromise

Along with the wonderfully bizarre, empathy abounds in Lincoln in the Bardo, for not just the mourning living but also the dead. Optimists will find renewed faith in the potential we carry within or the beauty of the world’s every detail. The book was clearly written by an author possessing otherworldly love.

But in war, empathy for the enemy doubles the burden. History shows that Lincoln’s own deep love for all must have worsened his anguish. He once wrote of his opponents, “If slavery did not now exist amongst them, they would not introduce it.” The President did not fault the nature of those he killed. Even the worst person deserved compassion. Take the true tale of Nathaniel Gordon. Lincoln had the slave-trader hanged — the only one ever killed by the U.S. government. Yet the President still afforded him a fortnight to make “the necessary preparation for the awful change that awaits him.” As it happens, those two weeks ended the day after Willie’s death.

How could such a human find solace for the death he has caused and witnessed? There must be a moral here for those of us who feel, and have done, less. Saunders’ Lincoln rationalizes all the killing (“A mountain. Of boys.”) by believing in God (“a great beast”) and the existence of the human spirit beyond the body. He finds relief in that the deceased are “either in joy or nothingness.” Because they will find peace, his acts are redeemed, and his son is at rest.

Yet Saunders offers the reader a glimpse into the afterlife that makes a naïf of Lincoln. We see that there is no simple joy or nothingness ahead. There is the bardo, and there are the dead, often still full of regrets, delusions and, even in death, despair. Even those we believe to be righteous can be damned.

The final 50 or so pages of Lincoln in the Bardo are themselves a matterlightblooming phenomenon. Loud and big. Exploding with grief and, more so, hope. And better left undescribed until you yourself reach the end. 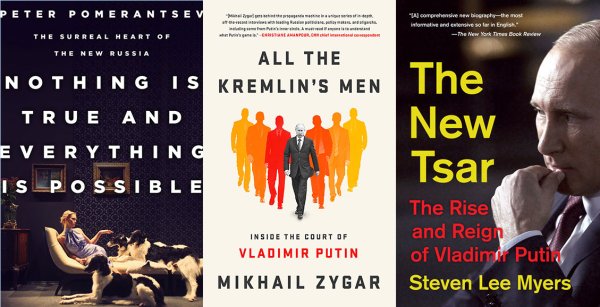 9 Books That Can Help You Understand Russia Right Now
Next Up: Editor's Pick