Dev Patel on Lion, the Oscars and His Meatiest Role Since Slumdog Millionaire

Dev Patel has been here before. The cycle of endless interviews and red-carpet appearances that has him crisscrossing oceans to promote his latest film, Lion, is much like the one that followed his first movie, Slumdog Millionaire, eight years ago. But this time, it’s different. Now 26, the British actor is a little less starry-eyed, if no less grateful for the ride. He has been to enough post-screening Q&A sessions in half-empty auditoriums to know that the kinds of standing ovations that bookend his still young career are, as he tells TIME, “an anomaly, and a very special one.”

Lion, for which Patel won a BAFTA and earned Golden Globe, SAG and Academy Award nominations for Best Supporting Actor, tells the true story of Saroo Brierley, played in the first half of the movie by 8-year-old first-timer Sunny Pawar, and in the second half by Patel. Born in India, Brierley got separated from his family at age five and was officially declared a lost child and adopted by an Australian couple. (Nicole Kidman, who plays his adoptive mother, is also nominated for an Oscar.) Twenty years later, with limited memories of his early years, he used Google Earth to search for—and find—his birth mother in India.

The role has Patel not only physically transformed—bulked up and lusciously mop-topped—but losing himself to a wrestling match with ghosts who might hold the key to his identity, if only he could find them. And it’s a part, he says, he’s been waiting for since Slumdog had audiences around the world singing “Jai ho.” Fresh off his BAFTA win, Patel spoke to TIME from Los Angeles about his own relationship to India, the upcoming Oscars ceremony and his next endeavor: producing.

TIME: You’ve said you felt like since Slumdog Millionaire you were waiting for a role like this to come along. Why do you think it took so long to happen?

Dev Patel: I just think the pond I was fishing from was very small. I try to be as versatile as I can in the characters that I’m offered. Some people phrase it as a blanket term as just playing “Indian men.” But I think that does a great injustice to the work. You can’t compare Slumdog to a Marigold Hotel, for instance, or a Marigold Hotel to The Man Who Knew Infinity. When this film came along, it was a character that didn’t require me to play into a specific box. That’s what I’ve been waiting for, to go on a journey where I could dig deep inside a human being and get stuck in there.

I heard you showed up at director Garth Davis’ doorstep to try to make this happen.

I had been sent a news article about it and the themes of the piece, I really responded to, as a young man. I was completely moved by the love that the whole family had: this woman in India who never lost hope in finding her son, this amazing mother in Australia who sacrificed everything and loved her son unconditionally and these two brothers who, despite having a slightly rocky relationship, there was a real foundation of care. The character had something which I respond to a lot, which is resilience. Those are the types of films I like to watch—someone who doesn’t give up, who achieves the impossible.

Saroo built his identity around growing up in Australia, since he had no tangible links to India. Having been born in London, with parents born in Kenya, what’s the nature of your relationship to India?

Despite Saroo being born in India, I’ve been there and have a deeper connection to it than he has. He sees himself through and through as an Aussie, and the one thread that connects him to that country is his mother and his family. With me, it was different because I have been exposed to the country so much because of the projects I’ve done. What we did relate to was the idea of suppressing a part of our culture to fit into where we were living. I’m of Indian heritage but grew up in London, and I did suppress that so I could be like everyone else in school and not feel different, not expose myself to bullying or prejudice. It was only when I shot Slumdog that I really started to understand and appreciate India.

You spent the better part of a year preparing for this role. What did that entail?

It was a lot of physical training. Garth was trying to push me into a new physical space on camera. He wanted me to be more masculine and not like the underdog I was in Slumdog. And then he sent me on an emotional journey that made me more vulnerable than I’ve ever been able to be on camera. That entailed going to India, traveling on the trains, visiting orphanages, writing diaries. I met the real Mrs. Sood, who was the woman who first showed Saroo the picture [of the Brierleys] and took him out of his horrible orphanage. She’s an extraordinary human being. She’s in her 90s. It makes the words on that page more sacred.

You share this character with Sunny Pawar, who plays Saroo as a child, but you don’t share screen time. What was your relationship like on set?

You could see him growing into an actor as the weeks went on. From someone who’s never been in front of a camera before or seen a boom mic, by the end of those three weeks, he was really aware. And kudos to the other two actors in those scenes, Priyanka [Bose] and Abhishek [Bharate], who have been really forgotten in this process but were so incredible at creating a safe atmosphere for this young boy to play freely in. A whole set of 150 people relying on this kid to perform—it’s a lot of pressure. And he really rose to the occasion. I’m standing on his shoulders in this film.

Some people feel like this year’s Oscar nominations are a sign of progress after two years with no non-white acting nominees. What do you make of it?

Look, I’m proud when I walk that red carpet and I look over and see Viola Davis, I see Octavia Spencer, I see Mahershala Ali, I see all these actors and more representing and it feels like a really inclusive, diverse season. I don’t believe in nominating performances for diversity’s sake. I hope performances are recognized because of talent. Where I want to focus my emphasis are not on the award ceremonies but on the birth of the stories. Where the stories are born is important, because that’s what enables us to go and do these great films. It’s amazing that the industry is supporting diverse voices, and that in turn ricochets into more work for everyone. I want people to focus on the art.

You’re an executive producer on Hotel Mumbai, which comes out later this year. Is producing a direction you’re planning to continue in?

One hundred percent, yes. If I can help breathe life into stories with diverse material, then that’s great. We need different storytellers. 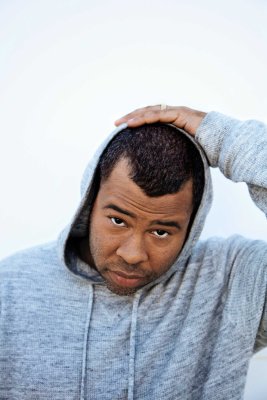 Jordan Peele Scares Us Silly In Get Out
Next Up: Editor's Pick