What a Vulnerable Benjamin Netanyahu Needs from President Donald Trump

No one knows exactly what to expect from the first official meeting between Israeli Prime Minister Benjamin Netanyahu and President Donald Trump on Wednesday.

The two men have known each other for years and Netanyahu has made no secret of his relief at seeing the back of President Obama, but administration policy is hard to discern from the contradictory tweets, comments and hints on the Middle East emanating from the White House.

This first encounter could set the tone for their future relationship, says Michael Oren, now a deputy minister in Netanyahu’s coalition, who as Israel’s ambassador attended most of the discussions between the Israeli prime minister and President Obama. “The first meeting between an American president and an Israeli prime minister is always significant,” Oren tells TIME. “I can tell you from personal experience that much of what occurred in the relationship between Netanyahu and Obama was presaged in their first meeting.”

“Trump has made comments which can be interpreted differently, whether it’s in regard to moving the American embassy to Jerusalem, or a two-state solution and the settlements. I think the prime minister’s going to go and listen, first and foremost, and see what the president has on his mind,” Oren says.

During the election campaign, Trump castigated Obama for abandoning Israel, endorsed the embassy move and selected David M. Friedman, a high-profile settlement fundraiser, as his new ambassador to the Jewish state. But since the inauguration, Trump has walked back much of his rhetoric.

In an interview last week with Israel Hayom, the mass-circulation Hebrew daily owned by Sheldon Adelson, a major supporter of both Trump and Netanyahu, the U.S. President revealed that the promised embassy relocation “is not an easy decision” and that he is “not somebody that believes that going forward with these settlements is a good thing for peace.”

Late Tuesday, the White House signaled the Trump would not insist on a two-state solution but by then critics of Netanyahu had already smelled a conspiracy, accusing the Israeli prime minister of encouraging Trump to water down his previous enthusiasm. Moshe Feiglin, a former Likud legislator who now heads the right-wing Zehut movement, says Netanyahu “manipulated the Trump administration back to Obama’s positions” and is planning a “strategic catastrophe.”

The vocal criticisms underscore the vulnerable position the Israeli leader currently finds himself in. Although he will soon become Israel’s longest-serving prime minister, Netanyahu is currently the subject of three separate corruption investigations. The police are considering whether to recommend he is indicted.

Against this backdrop, and buoyed by the election of Donald Trump, right-wing politicians now want to seize on what they see as a historic opportunity to cement Israel’s control of the West Bank and put an end to the idea of a two-state solution once and for all.

Education Minister Naftali Bennett, Netanyahu’s former aide who now heads the right-wing Jewish Home Party, has threatened to quit the coalition unless Israel drops its official policy of commitment to a two-state solution, which he described at Sunday’s conference as “delusional.” Yisrael Katz, a minister from Netanyahu’s Likud, called for the immediate transfer of the U.S. embassy to Jerusalem, rejected the idea of a settlement construction freeze and demanded the extension of Israeli sovereignty to the major settlement blocs around Jerusalem “to begin with.”

“Bennett is putting Netanyahu under a lot of pressure,” says Dennis Ross, a veteran State Department official and Middle East peace envoy now at the Washington Institute for Near East Studies, in a conference call with reporters. “He wants him to come [to the U.S.] and walk away from two states, which I don’t think he’s going to do.”

Netanyahu asked his right-wing colleagues on Sunday to damp down their “excitement” over the White House visit. He is eager to keep the status quo on a potential Palestinian state, for now at least, if only to satisfy the growing roster of moderate Arab states with whom he is quietly building unofficial trade and diplomatic relations in an effort to create an unofficial regional coalition to defend against the threat of ISIS and — perhaps most importantly of all — the growing influence of post-sanctions Iran.

“The prime minister will give precedence to the Iranian issue which he views as existential,” says Oren, the former ambassador. “He’s coming with specific ideas about how to grapple with the Iran nuclear deal and the broader threat of Iran throughout our region.”

If Netanyahu and Trump can forge a tough policy on Iran that has the backing of moderate Arab states, that would give the Israeli prime minister some good news to offset the criticism from the right — though it may not be enough to satisfy the increasingly fractious pro-settler movement.

“President Trump and I see eye to eye on the dangers emanating from the region but also on the opportunities,” Netanyahu assured reporters on Monday as he flew to Washington. On Wednesday, he will have a chance to find out how accurate that is. 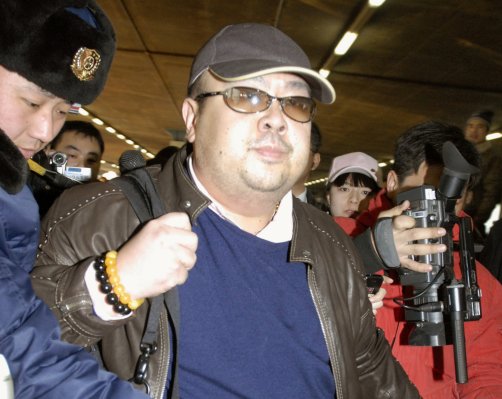 Intrigue Surrounds the Death of Kim Jong Un's Half-Brother
Next Up: Editor's Pick