How Protests Against Donald Trump Reveal a Class Divide

Demonstrators march from the White House to the Capitol Building, on Feb. 4, 2017 in Washington, D.C.
Zach Gibson—Getty Images
Ideas
By Mary Eberstadt
Eberstadt is the author of several books, including It’s Dangerous to Believe and How the West Really Lost God.

America is surfing an information tsunami these days. Cabinet appointments, executive orders, Tweet storms. If keeping up with the new administration isn’t exertion enough, there’s the progressive opposition — rising waves of public nyets against President Donald Trump, his Cabinet and defenders and all their works.

The so-called general strike now being planned for March 8 and the smaller ones leading up to it are the latest in a series of high-profile public protests unmatched in American presidential history. What you make of them depends on which part of the cultural geography you’re occupying.

Early February brought videos of the riot on the University of California at Berkeley’s campus, occasioned by the (cancelled) appearance of Milo Yiannopoulos. I watched onscreen as several hooded demonstrators forced a pro-Yiannopoulos protester to the ground and pummeled him, bloodying his face. A couple of weeks earlier, at the University of Washington’s Seattle campus, an anti-Yiannopoulos protester with the socialist group Industrial Workers of the World was shot; he is still in the hospital.

No doubt about it, Yiannopoulos offends people, especially progressives. He’s as un-P.C as a pro-life, Catholic, conservative, anti-feminist can be.

The night after the riot in Berkeley, comedian Gavin McInnes became the object of yet another protest that was a proxy for resistance to the Commander-in-Chief. This time the coastal venue was New York University. Again the mysterious figures in black, smashing and throwing things. McInnes was pepper-sprayed; eleven were arrested. On yet another day in February, progressive protesters swarmed Senator Charles Schumer’s apartment in Brooklyn, some chanting “What the f-ck, Chuck!”

I’ve been filtering some of this recent news through my sister, a Trump voter. Non-religious and a registered Independent, she’s a nurse, mother, and recent grandmother who lives in northern upstate New York. Her take is very different from that of people who cheer today’s burgeoning anti-Trump protests as some kind of Progressive Spring.

She wonders whether the demonstrators have jobs – and if so, what kind would allow them to spend so much time in the streets. She wonders why they seem to have nothing better to do than keep other people (Schumer and Trump) from doing their jobs.

About footage of the Women’s March, she asked how so many people had the financial wherewithal to travel to Washington, D.C., and spend the weekend there. She noted that many marchers seem well-heeled (literally: lots of UGG boots). She is baffled-to-disgusted by the Women’s March vernacular — especially the promiscuous use of words that she wouldn’t want her grandkids using, including the one used to describe the emblematic pink hats.

Pop in your red ear-buds, rather than your blue ones, and some of the cultural noise out there sounds very different from what supporters of today’s demonstrations are hearing.

The protests reveal a class divide. It’s about people who worry more about snow tires than heteronormativity; about the kinds of places where policemen are thought of as sons and brothers, not as targets for assault; about women who think inter-generationally first, and intersectionally second — if at all.

On the verge of what’s billed as the first American general strike in half a century, are the voices of these people fairly represented, too?

Ever since the election, progressives and others shocked by the result have scrambled to find cultural Rosetta Stones. They scan the recent past for clues they may have missed: incipient nativism, misogyny, nationalism, racism. They form, join, and avidly follow online groups with simpatico opinions. They dust off their Richard Hofstadter for a refresher course in American paranoia. They turn for insight to newer books, like J.D. Vance’s memoir Hillbilly Elegy or Sam Quinones’ Dreamland, about the devastating opioid explosion in rural white America.

But even the worthiest literary sherpas are no substitute for something so far missing from today’s coalition of discontent: authentic conversation with people who think differently.

If it’s to be positive rather than destructive, this new resistance must prove that its problem is Donald Trump – and not the 61-plus million fellow citizens who chose to vote for him. If inclusivity, not exclusivity, is what’s really at stake, then at least some of those protesting must be willing not only to shout, but also to listen.

Judging by news from all over, we aren’t there yet.

Mary Eberstadt is author of several books including It’s Dangerous to Believe and How the West Really Lost God. 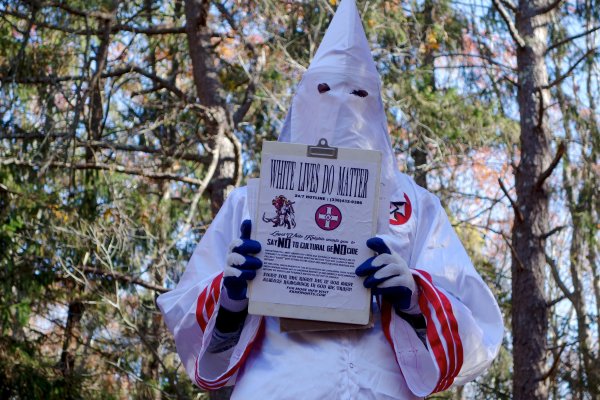 These Are the 917 Hate Groups Identified by the SPLC
Next Up: Editor's Pick