Fred Astaire and Ginger Rogers. Humphrey Bogart and Lauren Bacall. Leonardo DiCaprio and Kate Winslet. And now, Emma Stone… and Ryan Gosling? The two stars of Oscar frontrunner La La Land are ascending into the sphere of fame shared by Hollywood’s iconic film duos—minus the offscreen drama, plus a hefty dose of quirky humor. In movies, they sing, dance, act, and joke together. But it’s their very-much-platonic real-life relationship that deserves all the awards.

July 2011: Audiences were first treated to the Stone-Gosling dynamic in Crazy Stupid Love. Their funny, undeniable chemistry—as seen in their hilarious and steamy seduction scene featuring that move from Dirty Dancing—kicked off their collaboration. As their director later explained, much of the dialogue in their scenes was actually improvised, too. Of course, in real life, the story is entirely different: Gosling has two daughters with partner Eva Mendes, while Stone has had her own relationship with another leading man.

July 2011: During the press tour for Crazy Stupid Love, Gosling was quick to provide a particularly definitive expression of his affinity for his new costar. “She’s everything all the time. There’s nobody like her,” he told MTV News.

August 2012: In an interview with director Cameron Crowe for Interview magazine, Stone reflected on clicking with Gosling the first time they met. She said the connection was instant at their Crazy Stupid Love audition.

“I immediately felt a kinship with him,” she noted, adding that she reaches out to him about scripts. “I just really like hearing his viewpoint because I know that it’s never going to be tainted. He’s very much his own person,” she said. “It was like meeting a member of your team or something. I really like his brain.” Looks like even genetically-blessed celebrities can transcend the superficial stuff sometimes.

May 2013: The pair reunited onscreen for Gangster Squad alongside Sean Penn, a mobster movie with a more somber, violent tone than their previous work. Although the reviews were rather lackluster, we at least have this video—which is full of instances of their off-the-cuff humor.

“We get a little goofy around each other,” Gosling admits. “Whenever I look at him, I just want to make jokes and, you know, push him around,” Stone adds. Sounds like a sibling rivalry gone awry. While their illicit onscreen romance was no laugh, they certainly got their comic kicks in behind the scenes.

August 2016: Original movie musical La La Land made its buzzy debut at the Venice Film Festival. The two stars faced off for the third time as romantic foils playing aspiring actor and musician Mia and Sebastian, their easy chemistry buoying the movie to early rave reviews.

October 2016: A reporter from Vogue stopped by Stone’s Los Angeles home for a segment of “73 Questions.” When he asked what Gosling was really like in person, Stone didn’t hold back. “Bloodthirsty, and vengeful,” she deadpanned.

November 2016: On a visit to Ellen DeGeneres to promote La La Land, Stone again spoke about feeling comfortable with Gosling at all times. “It makes it very easy when you know someone,” she said of learning to ballroom dance alongside Gosling. “To learn with someone you don’t know must be terrifying. But with him, I was just sweating all over him and felt fine about it. I sweat a lot… We would dance for about a minute and he’d be like, ‘You all right? You OK?'”

December 2016: The two were the picture of friendship at the admittedly rather awkward Hand and Footprint Ceremony for La La Land, where they had to pose with their hands submerged in wet cement.

Around the same time, they also reflected on learning to dance for the movie. They trained individually for months, according to USA Today, before their director put them together at last. “I felt pretty nervous,” Stone said of finally pairing up with Gosling.

“They had told me for so long that Ryan was the best dancer that’s ever lived.” Gosling, meanwhile, said that he had been told Emma “was going to drop it like it’s hot all the time.” As Stone explained, it was “necessary” to learn separately because they tend to distract each other with on-set silliness. “Nothing gets done,” she joked.

January 2017: The La La Land awards season roll was just beginning to kick off, and Stone picked up a win at the SAG Awards for her performance. “Ryan, you’re the best. That’s just the truth. No one can argue it,” she said in her acceptance speech, as Gosling covered his face in a blush.

January 2017: Gosling nabbed the Best Actor prize at the Golden Globes, and started his acceptance with a shoutout to his director and co-star. “Damien and Emma—this belongs to the three of us. I’ll chop it into three pieces if you want. I don’t really want to do that because who would get what piece… it could tear us apart. But you understand. It’s ours,” he joked, before dedicating his award to his wife, Eva Mendes.

January 2017: Also after the Golden Globes, Stone joked about Gosling’s famed physique. “Ryan has full-body Spanx like a wetsuit,” Stone said ironically, before they left the scene to bask in their wins.

February 2017: During a very successful night at the BAFTAs, Stone was sure to praise Gosling for being a next-level human—”who elevates everything he touches”—in her acceptance speech.

February 2017: Stone finished off her hot streak of awards wins with the Best Actress trophy at the Oscars. True to form, Gosling did not go unrecognized in her emotional speech. “Ryan Gosling,” she said, “thank you for making me laugh, and for always raising the bar, and for being the greatest partner on this crazy adventure.” (The night would only get crazier, of course, as Stone and Gosling both soon ascended to the stage to collect the Best Picture award with their team, when La La Land was accidentally announced as the winner—until the Moonlight cast and crew came up to take their place.)

While Stone and Gosling aren’t slated to co-star in anything else just yet, and the La La Land awards season has officially come to a close, their fairy tale friendship will no doubt endure. 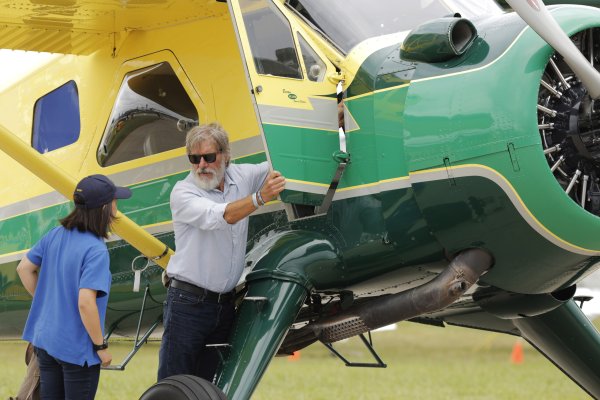 Watch the Moment Harrison Ford Flew Over an Airplane Before His Controversial Landing
Next Up: Editor's Pick