Pedro Hernandez Convicted in Murder of 6-Year-Old Etan Patz, Who Vanished in 1979

A New York jury has convicted Pedro Hernandez for the high-profile abduction and murder of Etan Patz, a 6-year-old New York City boy who vanished in 1979, according to multiple reports.

Hernandez, a 56-year-old former store clerk being retried for the crime after his first trial in 2015 ended with a deadlocked jury, “staked out” Etan for several days before strangling the boy to death, prosecutors said.

Hernandez had pleaded not guilty. The jury deliberated for nine days.

The case has gripped the public ever since Etan went missing from his SoHo neighborhood after begging his mother to walk to school alone. Etan was the first missing child put on milk cartons, and the National Center for Missing & Exploited Children has said his case was a catalyst for its creation. Etan’s remains have never been found.

Murder charges were not filed in the case until 2012, when Hernandez, who was 18 when Etan disappeared, confessed to investigators he lured the boy into the bodega where he worked by promising him a soda.

Hernandez told police he killed Etan in the store’s basement by strangling him. He said he put his body in a garbage bag, which he put in a dumpster.

Authorities never interviewed Hernandez during their initial investigation into Etan’s disappearance. But they have said that for years, Hernandez told his relatives and ex-wife about how he had murdered a child in 1981.

It was Hernandez’s brother-in-law, Jose Lopez, who initially tipped off police, leading to his arrest. Lopez called police in 2004 with information about Hernandez and then approached authorities again in 2012, just before Hernandez’s confession.

Authorities have said that when Hernandez confessed, he provided investigators with incriminating details.

Hernandez’s defense had long maintained his client had nothing to do with Etan’s disappearance and that his statements to police were not believable.

Soon after his arrest, doctors diagnosed Hernandez as having schizotypal personality disorder, a mental disorder characterized by severe social anxiety and paranoia. His lawyer claimed Hernandez has an IQ of 67, and that his medical records contain numerous references to schizophrenia. He has taken anti-psychotic medication for some years and allegedly experiences hallucinations.

During closing arguments in late January, Hernandez’ attorneys said he is “an odd, limited and vulnerable man” — but not a killer.

During his first trial, a psychiatrist who is an expert in determining the reliability of confessions testified that relying on Hernandez’s statements would be “profoundly unsafe” without corroborating physical evidence.

Hernandez’s attorneys have tried making a case for why Jose Ramos — a convicted Pennsylvania child molester — is the real killer. Ramos was dating a woman who was hired to walk Etan and other neighborhood children home from school during a bus strike.

Ramos never faced criminal charges and has consistently denied having anything to do with Etan’s death.

In 1981, Etan’s father, Stan Patz, spoke to PEOPLE about the family’s ongoing ordeal.

“People get raped or murdered, and those crimes, as horrible as they are, at least are contained in time,” Stan said at the time. “In this crime there was a beginning, but there is no end. We are faced with a very real question: Is our son dead or alive? Etan’s problem could have ended two years ago — but ours persists.” 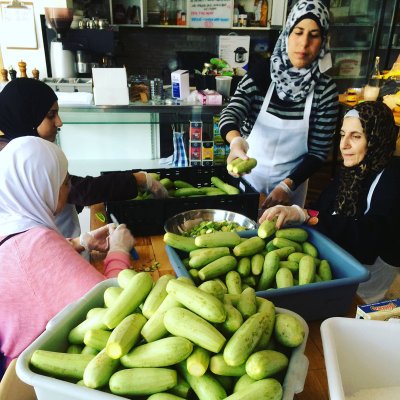 How Syrian Refugees in the U.S. Are Using Food to Fight President Trump
Next Up: Editor's Pick