America Is Forgetting Its Own History

President-elect Donald Trump and his wife Melania arrive to attend an inauguration concert at the Lincoln Memorial in Washington, D.C., on Jan. 19, 2017.
Mandel Ngan—AFP/Getty Images
Ideas
By Landon Jones

I have had relatively few traumatic experiences in my life, but one of them was on my honeymoon in London when I was stabbed — not by my bride but by a hooligan who was beating up a British police officer after an IRA bomb had exploded. I tried to intervene to protect the policeman. But not only do I not remember details correctly from the incident, I also don’t remember surrounding events from the week before or after. My brain was scrambled. So was my wife’s. The trauma stole our memories.

Something like that is happening to America right now. Both liberals and conservatives alike are losing the shared pool of assumptions and repeated stories that keep even diverse societies together. This is our collective memory, our national narrative, the mechanism by which we pass along our values and goals of our democracy to future generations. In short, it is the agreement about the past that we need to have in order to function as a cohesive society.

Now we are debating what were once givens: the civil liberties of individuals in a free society, the free press, the independent judiciary, the role of America as a refuge for the oppressed.

Why is this happening?

In his recent book, Collective Memory and the Historical Past, the philosopher Jeffrey Barash points out that while powerful new social media technologies such as Twitter intensify the direct communication between human beings, they cut us off from actual historical memory, which is out of the range of living memory. We gain social cohesion in the present but lose it when it comes to the past.

This is happening right now as the current Administration that deals in deliberate omission and forgetting. On Holocaust Remembrance Day, President Donald Trump left out any mention of the Jews — who found safety in the United States, who Americans came to save in what is remembered as “The Good War.” On the first day of Black History Month, Trump seemed to suggest Frederick Douglass was still alive or, as his opponents said, simply did not know who one of American history’s foremost leaders and writers was. Between those two failures of remembrance and history themselves — compounded by an ongoing onslaught on factuality — our President failed to remind us of what has made America great.

The problem is that collective memory matters. We may be through with the past, as the saying goes, but the past is not through with us. Veterans still struggle with the Vietnam War because we as a nation have not agreed upon what it meant. Some parents do not give vaccinations to their children because they have no experience of the ravages of diseases like polio or whooping cough. Our collective memory of the rise of fascism or of the eradication of Native Americans or of the internment of Japanese-Americans during World War II is the delicate defense that prevents them from happening again.

I will eventually settle on a story about the London episode to tell my grandchildren. To guarantee our common destiny, though, all of us need to tell the hard-won stories that got us here. 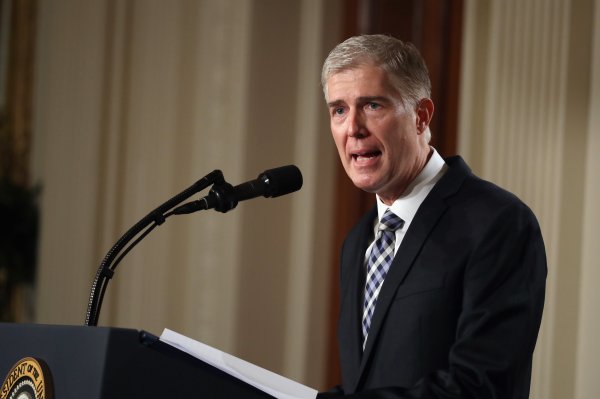 What Neil Gorsuch Means In the Battle Over Abortion Rights
Next Up: Editor's Pick