Capping crippling weeks of disclosures about President Trump’s top national security aide, the White House late Monday evening sent Michael Flynn packing and ended the drama surrounding a former intelligence maven who had won the billionaire’s trust despite the misgivings of many in his circle.

Trump named retired Lt. Gen. Keith Kellogg, Jr. as his acting National Security Advisor, elevating at least for now the man he had first selected to serve as the Executive Secretary of the National Security Council. Kellogg, a Vietnam veteran who rose to national prominence as a senior executive rebuilding Iraq after the United States’ 2003 invasion, was a top policy adviser as Trump moved from New York celebrity to commander-in-chief.

Flynn’s departure was the first high-profile exit of a key Trump adviser, but it was unlikely to be the last. The Trump Administration had been under fire since it took power 24 days earlier, and it’s unclear how much one departure would make up for the tumultuous start.

The decision also did not answer the question if Flynn began the conversations with Russian officials on his own accord or if he was operating on the direction of Trump. It was not immediately clear how—now that the world knew about his contacts—what leverage Russia could exert over Flynn by way of blackmail. Congressional Democrats, meantime, were unlikely to see Flynn’s exit as the end of this story.

There was rare silence on the subject from the President—in person, on paper or by Twitter—who worked late into the evening in the West Wing.

The whole affair started with text messages between the Russian ambassador to the United States and Flynn. It escalated to incomplete information given to future colleagues and culminated with a scandal that suggested the incoming Administration had been looking to undermine the outgoing team of President Obama. The episode invoked memories of Richard Nixon’s 1968 backchannel conversations with South Vietnam that looked to shape the outcome that November.

Flynn’s job was on the line after he apparently misled Vice President Mike Pence about the extent of his conversations with Russian Ambassador Sergey Kislyak. Pence relied on Flynn’s denial that he hadn’t discussed U.S. sanctions on Russia with Kislyak—an assertion that Pence repeated to the press and which now appears to be false.

Pence, who was the highest-ranking official who relied on Flynn’s word in public statements, told his colleagues that he would defer to Trump’s judgement whether dismissals would be needed. Pence was not eager to pick a fight with the broader Trump orbit, but knew that his deference would only pump up the pressure on Trump. In effect, silence was the greatest tool he had to ensure Trump owned the choice that was coming.

Under fire from within and without, Flynn saw that it was time to leave.

“I inadvertently briefed the Vice President-elect and others with incomplete information regarding my phone calls with the Russian Ambassador,” Flynn wrote in a 308-word resignation letter. “I have sincerely apologized to the President and the Vice President, and they have accepted my apology.” Even so, he was gone before the Administration reached its 25th day in power.

A senior Administration official told reporters that Trump has identified three finalists for the permanent position: Kellogg, former Vice Admiral Bob Harward and former General David Petraeus. That last option proved the most provocative, given his own scandals in leaking classified information to a biographer, and a senior officer sought to downplay his position on Trump’s short-list. At the same time, it brings a certain star power appeal for Trump.

Kellogg is a known quantity in the Trump orbit, though his influence thus far in the national security decision-making process has taken a backseat to Flynn’s. Harward is a former deputy of Defense Secretary James Mattis, who frequently clashed with Flynn in his first weeks on the job. It’s also unclear how he might fit into the circle of fast friends of Mattis and Secretary of State Rex Tillerson, who distrusted Flynn.

The national security advisor is among the most significant officials inside the wide foreign policy machine for the United States. As the main White House official tasked with watching the world and representing the President and his National Security Council to the outside world, the role is sprawling and often operates in rooms without windows. They spend hours in basement bunkers looking for answers that are often impossible to find. The best national security advisors have the President’s trust and can forge a consensus among others in that circle, such as the secretaries of State, Defense and Homeland Security. Given his apparent problems with being forthcoming, it was unlikely Flynn could have continued in that position with any degree of respect or power going forward.

Really, there were few routes available to Flynn, especially after White House officials confirmed a late-Monday report that U.S. intelligence officials were alarmed enough to warn the Trump Administration about contacts with the Russians. Ultimately, the Obama Administration gave Trump’s lawyers a heads-up that Flynn was talking about things far afield from benign chatter. Flynn, a former in-house spymaster at the Pentagon, should have known his calls were being monitored. He misjudged just how in peril the move left him.

A longtime favorite of Trump and among the core group of generals whom Trump trotted out as serious endorsers, Flynn was a flashpoint inside the West Wing in recent weeks. It became clear in recent weeks that Flynn had misled Pence, Chief of Staff Reince Priebus and spokesman Sean Spicer. Flynn sent out that troika of Trump insiders to represent him contacts with Russian counterparts, only to have them all left exposed. It proved embarrassing not just for Flynn but also the President and Vice President.

But the latest controversy was far from Flynn’s first error, aides said. Trump was frustrated after Flynn failed to adequately brief him on an executive action that reorganized the National Security Council that also placed chief strategist Steve Bannon on the powerful Principals Committee. Career officials at the NSC are up in arms trying to adapt to the new Administration and Flynn’s leadership. The former Director of the Defense Intelligence Agency was dismissed by the Obama Administration over his management style.

Trump, a senior Administration official tells TIME, was initially inclined to stand with Flynn but had second thoughts. Flynn recognized that even if he stayed, his footing would be shaky. Pence would never trust him again.

The Flynn issue was the subject of a running series of high-level meetings throughout the White House late Monday, which involved Trump, the most trusted aides to the Vice President, Kellyanne Conway, White House Counsel Don McGahn and Priebus, as well as several other communications aides. It was clear from the hushed tones—and frequent text messages to reporters and outside allies—that something was afoot. Many involved wanted to find a way to save face.

At 10:10 p.m. Flynn left the Oval Office after tendering his resignation, an official told TIME. He walked briskly as he headed to his office suite on the northwest corner of the West Wing for his final time in this job. By 11 p.m. the White House was ready to make the news public, distributing a copy of Flynn’s resignation letter, which was the subject of several revisions throughout the evening. He and had left the complex by 11:30 p.m.

Flynn’s ouster comes after a tumultuous day of mixed messages emanating from the White House about Flynn. Earlier Monday anonymous aides traded quotes musing about Flynn’s future. Flynn delivered the presidential daily briefing to Trump in the morning, joined him on calls with foreign leaders and was seated in a prime location at the president’s joint press conference with Canadian Prime Minister Justin Trudeau. Just after 4 p.m. Monday, Kellyanne Conway assured reporters that “General Flynn does enjoy the full confidence of the president.”

But an hour later things had changed. Spicer noted that “the President is evaluating the situation.” It was yet the latest instance of one West Wing hand not knowing what the other was doing—or if they were doing it on the President’s orders.

“This is what he asked me to communicate to you,” Spicer told reporters, saying his phrasing represented the President’s thinking after a conversation in the Oval Office. After Spicer released his statement, he huddled briefly with top aides to the Vice President, followed by a conversation with Conway.

But it’s worth noting: being fired by Trump does not mean going into exile. His first campaign manager, Corey Lewandowski, is still cashing-in on his connections to the West Wing. Lewandowski’s replacement, too, was dismissed but still advises Trump’s circle from time to time. Longtime Trump adviser Roger Stone is publishing a book about how the President won, even though some in the West Wing dispute his real clout with Trump.

After all, having the President’s cell phone number can sometimes be as effective as having an office on the same floor. And that’s why many intelligence officials remain worried about Flynn. 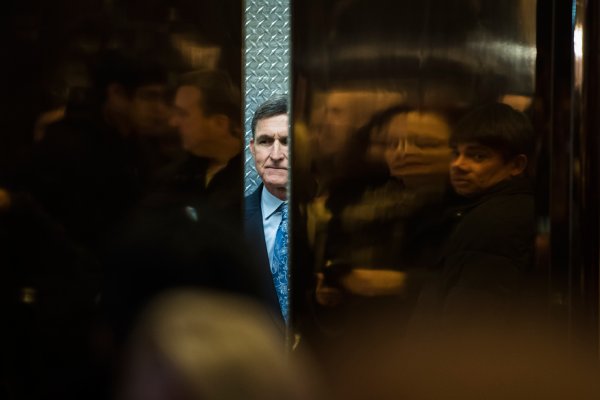 Read Michael Flynn's Resignation Letter From the Trump Administration
Next Up: Editor's Pick