Once again, the Trump Administration is facing embarrassing questions after leaks that appear to have come from the intelligence and diplomatic communities.

The latest leaks revolve around White House National Security Adviser Michael Flynn, who has been under fire for misleading Vice President Mike Pence about discussing sanctions with the Russian ambassador during the transition.

The Associated Press reported that Flynn had resigned Monday night.

Observers and officials from previous Administrations say the pace and volume of leaks in the Trump White House are surprising.

“All Administrations leak and maybe particularly early on. But what surprises me here is the extent with which you have people leaking against each other,” said Eliot Cohen, a counselor at the State Department under George W. Bush. “This is unprecedented.”

The leaks appear to be just the latest salvo in a long-running back and forth between Trump and the intelligence and diplomatic corps, though it’s also possible that some of them came from other political and policy sources, including rivals inside the White House.

One early set of leaks came over the summer, after Trump claimed that analysts at his first classified briefing as the Republican nominee told him through their “body language” that they disagreed with President Obama’s policies, the sort of thing that intelligence professionals pride themselves on not doing.

In January, shortly before Trump’s inaugurations, multiple senior intelligence officials told CNN about classified briefings from intelligence officials about a dossier that claims Russian operatives had compromising information about him. In February, senior U.S. officials provided the Washington Post with an account of Trump’s tetchy phone call with the Australian Prime Minister, contradicting the White House version of events.

And last week, current and former U.S. officials told the White House that Flynn discussed U.S. sanctions against Russia in a phone call with the ambassador, contrary to public assertions by Trump officials.

Some observers think the leaks reflect uneasiness in the intelligence community about the President.

“People will put the country ahead of allegiance to someone who betrays the oath of office he took and I think that is what is happening,” said Glenn Carle, a retired CIA operations officer and former deputy officer on the National Intelligence Council. The Administration “is shocking. That’s why there are leaks.”

But Trump has also had a particularly fraught relationship with the intelligence community. After the CNN story on the Russian dossier, Trump questioned whether outgoing CIA director John Brennan was the source of the leak and criticized the agency’s record.

He also raised eyebrows among CIA veterans with a long and rambling speech after inauguration in front of the CIA’s Memorial Wall, which honors intelligence officers who died in the line of duty.

“It’s simply inappropriate to engage in self obsession on a spot that memorializes those who obsessed about others, and about mission, more than themselves,” former CIA acting director John McLaughlin told the New Yorker after the speech.

Senate minority leader Chuck Schumer said last month in an interview on MSNBC that Trump was being “really dumb” by feuding with the intelligence community.

“They have six ways until Sunday to get back at you,” Schumer warned. 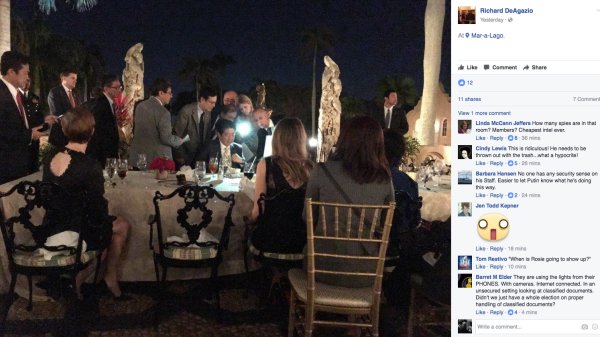 Social Photos Show Risks of the 'Winter White House'
Next Up: Editor's Pick