Henry Louis Gates Jr. on How Africa Has Always Been Ahead of Its Time

The number of women who ruled the ancient kingdom of Kush might surprise those unfamiliar with that ancient African kingdom. But, as this exclusive clip from the upcoming six-part PBS documentary Africa’s Great Civilizations shows, queens like Amani Renus played a major role in world history.

“Anyone who is named Candace got her name from the queens from Kush. Kandake meant queen. These are facts that we just don’t know about,” says Henry Louis Gates Jr., Director of the Hutchins Center for African & African American Research at Harvard University. Gates hosts, executive-produced and wrote the series, which premieres on Monday. And, given that it’s a 200,000-year survey of the continent’s history, the feats of the Queens of Kush comprise just a small portion of what it covers.

Gates spoke to TIME about his goals for the series and what early African history has to teach viewers today.

TIME: A huge topic like this is always relevant, so why do this series now? Have new facts or records been discovered recently?

GATES: That’s a good question. In the last 20 years, the digitization of records has made them more accessible, and there has been lots of new scholarship, more archaeological digs, more sophisticated research. We know more about Africa than we did any time recently. In 2003, Charles Bonnet found seven statues of “Black Pharaohs.”

And the series ends [its broadcast run] on the anniversary of the battle of Adwa — Mar. 1, 1896 — when the Ethiopians defeated the invading Italians, defending the integrity of their kingdom. Ethiopia was the third country to convert to Christianity anywhere. Rome was the first, Armenia second and Ethiopia third, in 350 A.D. — long before northern Europe did. Ethiopians believe the arc of the covenant is really there — forget Indiana Jones! They’ve had this belief for centuries; it’s a myth of course, but their claim is that Solomon and Sheba had an affair, which is in the Bible, but Sheba was from Ethiopia. She got pregnant, she came back, had a son, named him Menelik. When he was 16, he wanted to meet his dad so he went to Jerusalem; there are different variations of this story but one is that they came up with a fabrication of the ark of the covenant and left the replica in Jerusalem and brought the real one back in Ethiopia, and that was used to kick the Italians’ a–es.

Is there anything that people tend to get wrong about this history? Some myth you hope to debunk?

When we think of Africa, what comes to mind? Poverty. Flies. Disease. Coups. Primitive.

But it turns out Africa has been in touch with the world from the very beginning, and that things we think of as barriers were really highways, like the Sahara, particularly after the domestication of the camel about the second or third century A.D..

There’s the Nile River, the Mediterranean, the Indian Ocean, the Red Sea… There was even a book published in Greek written in about 50 A.D., a trip adviser’s guide down the Red Sea about who the kings were, where you can trade and what goods to ask for. And the East Coast of Africa has been in touch with Arabian peninsula and India and China forever. The King of Great Zimbabwe ate off porcelain made in China! We wanted to show that urban life was widely established, and that along with these long distance trading networks, interior networks that the Africans developed, you had shipping routes particularly out of east Africa that went to the Arabian Peninsula, Persia and India.

We have this myth that basically Africa was frozen until white people came in during the scramble for Africa, at the 1884 conference in Berlin where the European powers and King Leopold sat down with an empty map of Africa and carved up the continent like you carve up a pizza pie. It’s just not true.

Another thing that we see in the news today about Africa is the flow of migrants across the Mediterranean. Is there anything we should keep in mind about this history when we read about that crisis?

Well, yes. We know that the North African Muslims conquered and ran Spain from 711 A.D. to 1492, starting with Ziyād, a general who got rid of Visigoths. That’s one kind of migration. But the flow of ideas and people went both ways, as equals. 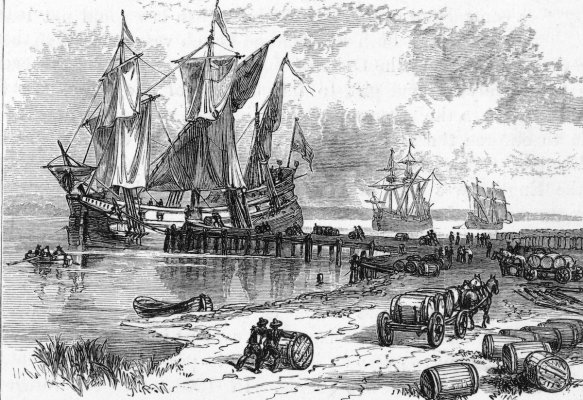 Early American Colonists Had a Cash Problem. Here's How They Solved It
Next Up: Editor's Pick