Immigration enforcement arrests over the past week in major cities across the country have sparked renewed concern among advocates that the Trump Administration is expanding the focus of deportations.

The Department of Homeland Security said Monday 680 people were arrested during immigration enforcement operations last week by officers in states throughout the Midwest, Southeast, California, New York, and Texas. In a statement, Homeland Security Secretary John Kelly said the arrests were routine.

But on a conference call Monday afternoon, pro-immigration advocates said they believe dozens of people without criminal convictions were among those arrested and deported during last week’s actions.

ICE officials confirmed last week that 10 of the 161 people had been arrested as a result of removal operations in Southern California had no criminal convictions. According to the statement by Homeland Security, 25% of those arrested were not “criminal aliens”— though 75% of those arrested had been convicted of crimes ranging from homicide, sexual abuse, child sexual assault, drug trafficking and weapons charges. For example in the Midwest, where arrests were made in six states, 163 of the individuals who were apprehended had criminal convictions, according to an ICE fact sheet. Another 60 had been removed from the U.S., but returned illegally and 12 were facing deportation orders.

President Trump insisted the raids have specifically targeted criminals, saying in a Sunday tweet that the “crackdown on illegal criminals is merely the keeping of my campaign promise. Gang members, drug dealers & others are being removed!” Trump repeated that claim at a press conference with Prime Minister Justin Trudeau on Monday, saying the Administration was focusing on getting the “really, really bad ones” deported.

Generally speaking, raids are not a new tactic. Both the Bush and Obama administrations conducted sweeping enforcement actions within immigrant communities. In response to the surge in Central Americans crossing the southern border in 2014, the Obama Administration conducted a series of raids last winter and again in the summer. Though President Obama said that hardened criminals would be the priority for deportation, minor and low-level offenders were often swept up in raids.

But immigration advocates say that given the Trump Administration’s rhetoric and a recent executive order that expanded the types of criminal acts that would make one a priority for deportation—including being convicted or charged of any criminal offense, and committing an act that could lead to a criminal charge—signal the last week’s action’s were not routine. Advocates also worry there will be increased and emboldened action taken by officials under the new administration.

“Every administration, going back to the Bush Administration and the Obama Administration, has also had fugitive operations, but fugitive opps are supposed to focus exactly on that—fugitives,” or people who were convicted of a crime or deemed a priority for deportation by the administration, said Marielena Hincapié, the executive director of the National Immigration Law Center.”The big difference now is that there are no priorities. Everyone is a priority.”

Frank Sharry of America’s Voice said, “we’re back to the bad old days in which the term criminal means someone who is here without papers trying to survive.”

Fear and anxiety has already spread throughout immigrant communities. Leaders at United We Dream and the Coalition for Humane Immigrant Rights of Los Angeles said they have received hundreds of calls last week from concerned immigrants and community members. Advocates are working to ensure immigrants are aware of their rights and what steps they can take to protect themselves if ICE conducts a sweep on their home.

“This is causing great horror in our communities. It is not ordinary and it must stop,” said the coalition’s Angelica Salas. 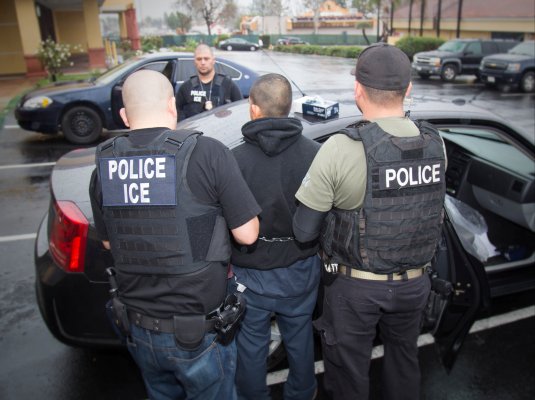 What to Know About Recent Immigration Raids
Next Up: Editor's Pick