Should the U.S. Prioritize Christian Refugees? No Thanks, Some Arab Christians Say

Salvaged books and other items are placed around the altar of a church, burned and destroyed by ISIS during the group's occupation of the predominantly Christian town of Qaraqosh, Iraq, on Dec. 27, 2016.
Chris McGrath—Getty Images
By Rebecca Collard / Beirut

When President Donald Trump suggested recently the U.S. should prioritize persecuted Christian refugees, not all Christians in the Middle East rejoiced. “We want don’t priority visas. We don’t want him to take us,” says Habib Ephrem. “That’s the wrong message and the wrong policy.”

Ephrem, secretary general of the Gathering of Christians in the Middle East, is one of a number of Christian leaders encouraging Christians to stay in the region and return to their homes in Syria and Iraq, as the areas are cleared of the Islamic State of Iraq and Syria (ISIS) and other groups. Tens of thousands of Christians have been displaced in recent years, mostly languishing in camps and cramped apartments.

But Ephrem says countries that are prioritizing Christian refugees are effectively helping ISIS purge the region of different faiths. “ISIS expels people from their homeland and then you take them to the West,” says Ephrem. “So what? You are doing the policy of ISIS?”

He has gone as far as lobbying foreign governments to stop facilitating Christian migration. The U.S. does not currently give Christian refugees priority, despite Trump’s suggestion, but in the past countries including Poland and Slovakia have indicated they would give preference to Christian refugees, and France has also previously offered to host Christians that fled ISIS. Other countries, like Canada, offer private sponsorship programs at are often used by churches to bring their brethren to the country.

Ephrem and others believe Iraq and Syrian Christians are deserting their earliest homelands. The Christian communities there are some of the oldest in the world; the Nineveh plains and cities in Northern Iraq are even mentioned in the Bible. The exodus of Iraqi Christians started after the U.S. invasion in 2003, but it was ISIS’s rapid advance in 2014 that pushed thousands to flee their villages in a matter of days. ISIS’s objective of creating an Islamic caliphate left Christians with few options — convert, pay, die or leave.

Many chose the latter path. In the past year Karim Faraj’s Facebook feed has been filled with pictures of his Syrian Christian friends now in Europe and Canada. He says hundreds of Christians he knows have found ways to get to Western countries. Some went with visas, but most paid smugglers. His village in Hama province is now controlled by Russian and Syrian forces, he says, but it’s not safe. However, he stayed close by, in neighboring Lebanon, and say he wants to go back to Syria.

“You can’t be truly comfortable except in your own country,” says Faraj, 21. Yet other Syrian Christians say they have little to return to. “Go back to what?” asks Joseph Youhana, a farmer from Hasakah in northeast Syria. “I watched ISIS blow up our church.”

Youhana and his family were held captive by ISIS for 10 months. The militants tried to force them to convert to Islam. In September, the church struck a deal with ISIS to release him, his family and more than 200 other Christians, for a sum of $3.5 million, most of it raised through donations.

Many Christian refugees say even if their villages are retaken by government or other friendly forces they will never feel secure again. As Youhana and the others were loaded on buses in ISIS’s de facto capital, Raqqa, bound for the Lebanese border, one of the fighters pulled Youhana’s 14-year-old niece off the bus. “We’ve heard nothing about her since. ISIS still has her,” he says, showing her picture on his phone. “I will not take my daughters back there.”

Youhana says that even if he felt safe enough to return, he doesn’t have the money to rebuild his house. Some Christian leaders argue that instead of simply taking Christians in, Western governments should invest in rebuilding these communities and help guarantee Christians and other minority groups equal rights in their homeland.

Nafa Mayouma, 50, says that will never happen. He left Mosul just as ISIS took the city in 2014. The family stayed in northern Iraq for a few months before coming to Lebanon. Today, he prays in church in Beirut with hundreds of other Iraqi Christians. “Our church in Iraq didn’t want us to leave,” says Mayouma. “Maybe it’s useful for the bishops to have us stay. Not for us.”

He says he knows that soon there will be few Christians left in Iraq but that he’s not willing to go back and risk the safety of his family. Even if ISIS is pushed out of Mosul or even out of Iraq, Mayouma says it won’t be secure. “Fine, you take out ISIS. Two, three years later you’ll just have a bigger, fiercer group,” says Mayouma, citing the various militant Islamists groups that came before ISIS in Iraq.

Ephrem says he knows asking people to stay, or return, when they are still under attack is difficult — but he says Christians and other religious minorities need to resist. He points to Lebanon’s civil war. Thousands of Christians fled the often-sectarian fighting, but many stayed. Today an estimated 38% of the country is Christian, though there has been no official census since 1932.

What Christians need, says Ephrem, is more allies to fight groups like ISIS and Boko Haram — not help in fleeing them. Then perhaps the ancient Christian communities could return to Iraq and Syria. “Christianity began here,” he says. 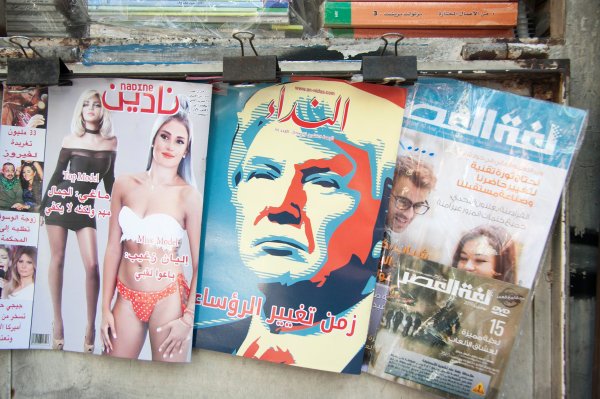 Meet the Arabs Who Say Trump Will Make the Middle East Great Again
Next Up: Editor's Pick