The Grammys Didn't Need Politics Because It Had Adele and Beyoncé

The Grammy Awards, chaotic as ever, showed the electric value of live television. And Adele provided the best of the jolts.

After all, it was she who opened the show, pulling off her instant-classic “Hello” in a manner that would be zero surprise—except for the fact that her comeback performance at last year’s show seemed doomed by audio issues. But after she nailed it this year, she returned for a tribute to George Michael which she chose to stop moments in, declaring, “I can’t mess this up for him” (after uttering a choice word bleeped out by CBS censors). And finally, she won the three top awards, delivering in her final prize an electrically charged tribute to fellow nominee Beyoncé that seemed at a certain point to ask Queen Bey to rise out of her seat and join Adele on the stage.

No such thing happened—it seemed apparent that Beyoncé, whether she knew or not that it’d be the end of her evening, said everything she needed to say when she read out of a gold-plated pamphlet accepting the Best Urban Contemporary Album award, following her own epic performance.

Beyoncé’s performance was stunning, not least because it happened at this Grammys. A masterpiece of control, it unfolded—with video elements and elaborate practical effects—at an awards show that, elsewhere, left Lady Gaga dwarfed by Metallica, with whom she shared a stage. There were flubs aplenty, and the best option was either to be so big a star as to define your own reality (as Adele did with her restart and Beyoncé did with her particular perfection) or to sit in the audience drinking from a flask. I’ll drink to that, Rihanna.

Host James Corden did little to distinguish himself. On any awards show, the job is to get out of the way, and on the Grammys, that duty is redoubled, given quite how many performances are on the agenda. So why, exactly, were we spending time with Corden’s parents, or following him in an opening monologue as he attempted to rap after falling barefoot down a staircase? The 2014 Ellen DeGeneres Oscar playbook seems to have informed every awards show that followed, with hosts having taken her endless availability but not her willingness to erase herself from the scene.

And finally comes the question of wokeness—the degree to which this, like all television events in the post-election era, are perceived to be responsible for an anti-Trump message. It’s a live question at the moment, following a Super Bowl that disappointed those who wanted Lady Gaga to do more political work than performing a ballad by a famous socialist and a song about gay and transgender rights. This award show’s most overtly political performer was A Tribe Called Quest, whose members chanted “Resist, resist, resist, resist” after performing “We the People.” Beyond that, Katy Perry’s political self-expression proved the value of couching your ideas in subtlety: Perry, performing her single “Chained to the Rhythm,” chose to hide her face and body for much of the running time behind a white picket fence, then danced awkwardly when freed. All this transpired, with Perry singing lyrics that have generally been interpreted to be about the public’s susceptibility to “fake news,” before the Preamble to the United States Constitution appeared backlit behind her.

If she’s truly over pop, that’s fine—but to use the mechanisms of pop music to suggest that we should tune out of pop culture in order to be more aware of what’s going on around us is an odd call-to-arms. Drake and Justin Bieber—top nominees, both Canadians known for a chilly sort of love on record—weren’t even present, though in their stead, Chance the Rapper and Bruno Mars delivered warmly empathic performances. Beyoncé had previously delivered an unusual and subtle demonstration of motherhood and pregnancy, and Adele would go on to show how natural she could be with a series of odd half-gaffes. It was a long and imperfect show, but one that entirely lacked the sort of glossy pop sheen Perry seemed to be decrying. If there was a rhythm this show moved to, it was that of a circuitous, odd, but ultimately gentle humanity—both removed from politics and deeply within it. 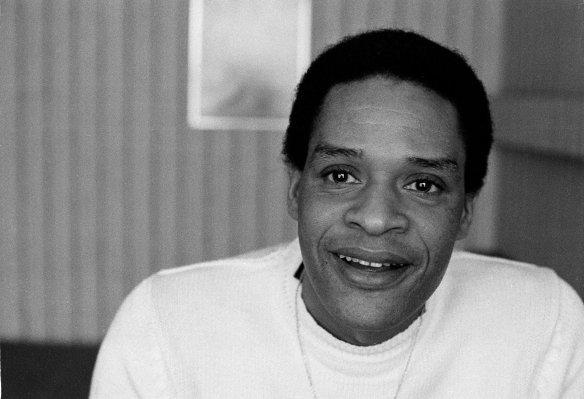 8 Songs That Show Al Jarreau Was the Greatest Male Jazz Singer of His Time
Next Up: Editor's Pick