Here Are the Most Political Moments From the 2017 Grammy Awards

Several presenters and performers at the 2017 Grammy Awards used their time on stage to speak out on the current state of politics in the U.S. From digs at President Donald Trump to calling for support for transgender people, celebrities used the platform to voice their opinions on the current administration.

Host James Corden jumped right into poking fun at Trump and the uncertainty many Americans have felt since his inauguration, rapping, “live it on up because this is the best, and with President Trump we don’t know what comes next,” in his opening monologue. Later in the show, Corden took another dig at Trump, saying negative tweets about his Grammys performance were “fake news.”

Jennifer Lopez wasted no time in rebuking Trump while presenting the first award of the night.

“At this particular point in history, our voices are needed more than ever,” she said. “As Toni Morrison once said, this is precisely the time when artists go to work. There is no time for despair, no place for self pity, no need for silence, and no room for fear. We do language, that is how civilizations heal. So tonight, we celebrate our most universal language, music as we honor the voices of the past and the present.”

Michael Jackson’s daughter Paris used her short time on the Grammy stage to show support for those protesting the construction of the Dakota Access Pipeline.

“We could really use this excitement at a pipeline protest, guys,” she said to the rowdy crowd. “Hashtag no DAPL.”

The singer wore a symbolic white pantsuit and sported an armband that said “PERSIST,” in an apparent reference to Mitch McConnell silencing Elizabeth Warren, while performing her new subtly political track “Chained to the Rhythm.” Toward the end of the performance, the U.S. Constitution projected behind Perry.

“No hate,” she said as the song concluded.

While accepting the Grammy for Best Urban Contemporary Album, Beyoncé delivered a powerful speech noting the importance of giving voice to those who are normally ignored

“My intention for the film and album was to create a body of work that would give a voice to our pain, our struggles, our darkness and our history. To confront issues that make us uncomfortable,” she said. “It’s important to me to show images to my children that reflect their beauty so they can grow up in a world where they look in the mirror — first through their own families, as well as the news, the Super Bowl, the Olympics, the White House and the Grammys — and see themselves. And have no doubt that they’re beautiful, intelligent and capable.”

Actress and activist Laverne Cox shone a light on Gavin Grimm, the transgender boy who is at the center of a Supreme Court case on trans rights, while introducing Lady Gaga and Metallica during the show. Grimm has become the face of the fight for transgender people to use restrooms affiliated with gender identity.

“Everyone please Google Gavin Grimm,” Cox said. “He’s going to the Supreme Court in May.”

The strongest take against the current administration came when Busta Rhymes referred to Trump as “President Agent Orange” during a performance by A Tribe Called Quest. 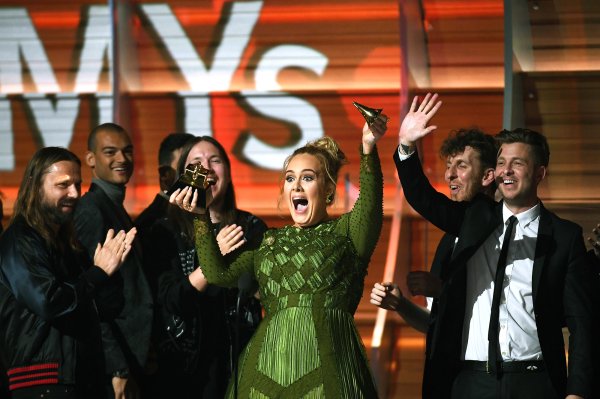 Adele Broke Her Grammy in Half in an IRL Mean Girls Moment
Next Up: Editor's Pick