James Corden Takes a Tumble Then Raps Through His Grammys Opening

James Corden recently told EW he’d have O-Town, *NSYNC, and the Backstreet Boys open the Grammy Awards if it were up to him — but sadly, the boy band trifecta was nowhere to be found. Instead, after Adele kicked off the show with a performance of “Hello,” the Late Late Show host pretended to bungle his entrance before launching into a rap about the ceremony.

Corden appeared on stage at the top of some stairs, and then fell down said stairs, losing one of his shoes and exposing a pink sock in the process. Dancers proceeded to do their thing on stage as all this happened, and he then theatrically stopped them, claiming, “This is a disaster!”

“We can’t allow these sorts of mistakes,” he said. “This is the Grammys, people.”

That’s when he started rapping his monologue, which included references to nominee Sturgill Simpson (“Google just crashed, everyone’s wondering, ‘Who the hell is that?’”) and President Donald Trump (“We don’t know what comes next … We can survive by sticking together”).

“Mostly your job is to just usher the show along with as much joy and energy as possible, really,” Corden previously told EW. “I’m going to try and do a couple of things that haven’t been seen before, but I don’t know — I might lose my nerve and decide not to!”

This year’s Grammys will feature performances by Beyoncé, Adele, Katy Perry, Lady Gaga, Metallica, Chance the Rapper, and more. See the list of winners, which we’ll be updating throughout the night, here. 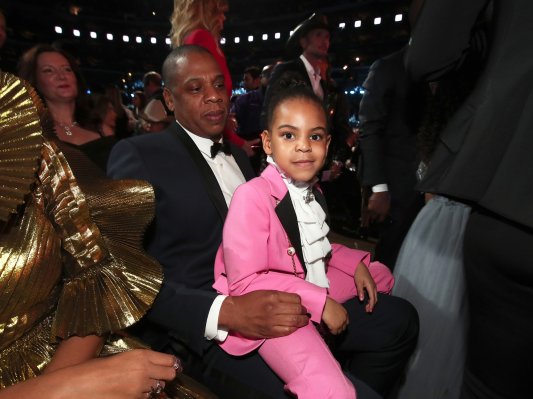