A federal appeals court on Thursday declined to lift a nationwide suspension of Donald Trump’s immigration order, refusing to reinstate a temporary travel ban that has dominated the turbulent start of his presidency.

The 3-0 decision by the Ninth Circuit, based in San Francisco, is a major legal setback for Trump, who had sought to block a Seattle judge’s order that the policy be put on hold. But the appeals court judges were broadly skeptical about the arguments made by Trump’s lawyers, rejecting their claim that a President’s authority on immigration matters could not be reviewed by the courts.

The judges, who convened an expedited hearing on Tuesday night to consider a matter with “particularly sensitive and weighty concerns on both sides,” were not persuaded by Trump’s lawyers, who argued they should reinstate the travel ban while the courts weighed its lawfulness.

“We hold that the Government has not shown a likelihood of success on the merits of its appeal,” the judges wrote, “nor has it shown that failure to enter a stay would cause irreparable injury, and we therefore deny its emergency motion for a stay.”

The Justice Department said it was “considering its options” in the wake of the decision. But many legal experts believe the case will ultimately be decided by the Supreme Court. At the moment, the Court has only eight sitting justices, though the Senate is preparing to consider the nomination of Judge Neil Gorsuch, a conservative tapped by Trump for the bench last week. If the Court takes up the case before Gorsuch is confirmed, it could deadlock 4 to 4, which would leave the Ninth Circuit’s decision in place.

The case climbed quickly through the judicial system. On Jan. 30, just three days after Trump issued the order and as chaos unfolded at airports around the U.S., the state of Washington sued the President and several key administration officials, including Secretary of State Rex Tillerson and Homeland Security Secretary John Kelly. Washington state attorney general Bob Ferguson argued the order was unconstitutional because it discriminated against Muslims, violated immigration law, harmed the state and its residents and denied due process to people whose visas were revoked. The state of Minnesota joined as a plaintiff in the suit soon after.

On Feb. 3, a federal judge in Seattle sided with the states, issuing a temporary restraining order that blocked the enforcement of Trump’s executive order nationwide. The judge, James Robart, found “the states have met their burden of demonstrating that they face immediate and irreparable injury,” noting, among other things, that the order harmed residents by limiting the freedom to travel, depriving businesses of customers and splitting up families. While other judges have blocked parts of Trump’s order—and others have upheld it—the ruling by Robart, a George W. Bush appointee, was the farthest-reaching.

After his decision, the Department of Homeland Security suspended enforcement of Trump’s controversial directive. But the Department of Justice quickly appealed. Four days after Robart’s decision, the Ninth Circuit convened in San Francisco to hear arguments in a case that has riveted the country and prompted President Trump to lash out against the judge. More than 100,000 people tuned into the oral arguments on a Tuesday night.

Though consequential, the quick decision Thursday was not unexpected. The Ninth Circuit is considered one of the nation’s most liberal. The panel reviewing the case included two judges appointed by Democratic Presidents and one appointed by a Republican. They telegraphed skepticism about the government’s case during oral arguments.

In the decision issued Thursday, the judges rejected the Justice Department’s claim that Trump had unchecked power to block immigrants from entering the U.S. for reasons of national security.

“The Government has taken the position that the President’s decisions about immigration policy, particularly when motivated by national security concerns, are unreviewable, even if those actions potentially contravene constitutional rights and protections,” the court wrote. “There is no precedent to support this claimed unreviewability, which runs contrary to the fundamental structure of our constitutional democracy.”

“Although our jurisprudence has long counseled deference to the political branches on matters of immigration and national security,” the judges continued, “neither the Supreme Court nor our court has ever held that courts lack the authority to review executive action in those arenas for compliance with the Constitution. To the contrary, the Supreme Court has repeatedly and explicitly rejected the notion that the political branches have unreviewable authority over immigration or are not subject to the Constitution when policymaking in that context.”

The executive order, the judges wrote, might violate the due process clause in the Fifth Amendment by denying entry to the country to lawful permanent residents as well as refugees seeking asylum. In addition, they said, Trump’s lawyers “pointed to no evidence that any alien from any of the countries named in the Order has perpetrated a terrorist attack in the United States.”

Trump greeted the decision with a blast of defiance. “SEE YOU IN COURT,” he tweeted in all caps, “THE SECURITY OF OUR NATION IS AT STAKE.”

A senior administration official told TIME the President had not spoken with Jeff Sessions, who was sworn in Thursday as the new U.S. attorney general, before his tweet. 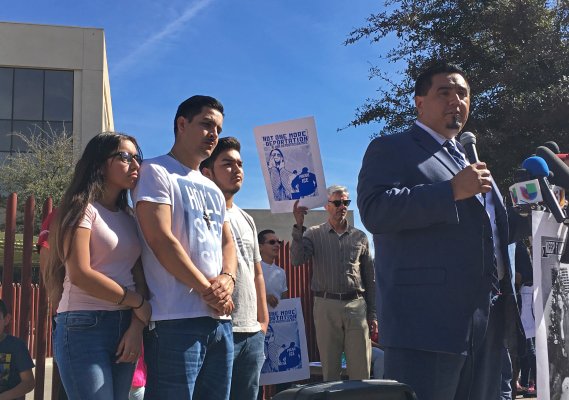 Children of Immigrant Deported to Mexico Speak Out: 'She Belongs With Us'
Next Up: Editor's Pick