President Trump Said He Would Be Open to Immigration Reform

President Trump told a group of lawmakers at the White House on Thursday that he is open to reexamining the 2013 Gang of Eight immigration bill, a bipartisan compromise that included a path to citizenship for undocumented immigrants, according to a Senator who was at the meeting.

Democratic Sen. Joe Manchin of West Virginia told reporters on Capitol Hill that in their meeting Trump said he was open to reexamining the legislation. A spokesman confirmed Manchin made the comment to reporters.

Shortly afterward, the White House walked back the President’s statement, with White House spokesman Sean Spicer he does not support the Gang of Eight but encouraged similar cooperative efforts by Senators in the future.

If the President did support the Gang of Eight, it would be a remarkable break from his previous stance on immigration. He has called for building a wall on the border with Mexico and relentlessly mocked Florida Sen. Marco Rubio for supporting it, calling him “Mr. Amnesty” in a November 2015 tweet.

It’s unclear whether the President understands the bill and its implications. It included provisions to build tougher border security and allow over a multi-year period undocumented residents to eventually achieve legal status.

Drafted by Republican Sens. John McCain, Marco Rubio, Jeff Flake and Lindsey Graham, as well as four Democrats including Sen. Chuck Schumer, now the Democratic leader, it passed the Senate with an overwhelming majority but was never brought to the floor of the House of Representatives for a vote.

Trump’s popularity with his base stemmed in part from his hardline opposition to compromise on immigration reform. There are an estimated 11 million undocumented people living in the United States. 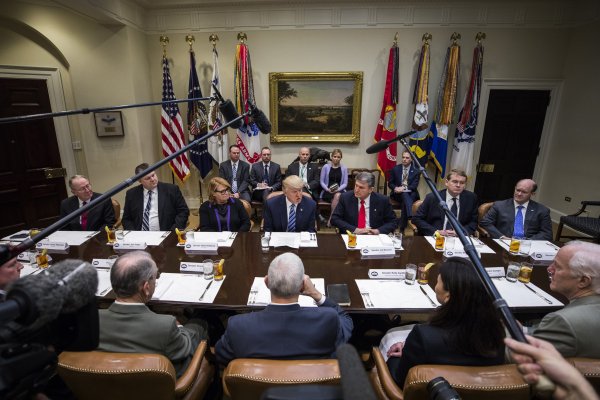 No President Has Spread Fear Like Donald Trump
Next Up: Editor's Pick