The majority of Americans oppose President Donald Trump‘s plan to eliminate environmental regulations that combat climate change, according to a new poll, underscoring skepticism about an oft-repeated promise the campaign trail.

The Quinnipiac University poll shows that 61% of Americans oppose removing regulations that combat climate change, with remaining 29% supporting the rollback. Trump has aggressively pursued deregulation in the environmental area during his first weeks in office, working with Congress to undo a slew of rules recently implemented under former President Barack Obama. The Clean Power Plan, Obama’s most significant domestic measure to fight climate change, remains on the books, though Trump promised during the campaign to undo it.

The poll also found that 50% of Americans oppose reviving the Keystone XL and Dakota Access pipelines, compared to 40% who support the pipelines. Trump has already taken decisive action on both, directing the Army to issue the final permit for the Dakota Access Pipeline and inviting the company behind Keystone XL to reapply for a permit rejected under the Obama Administration.

Most Republican elected officials at the federal level have rebuffed efforts to launch a full-throated effort to address climate change, but some have argued that the party is out of step with the American public on the issue. A group of Republican elder statesmen on Wednesday proposed a carbon tax as an alternative to the Clean Power Plan. Their announcement noted the broad scientific consensus that the issue must be addressed urgently, as well as the discrepancy between party orthodoxy and the views of the general public.

The national survey of more than 1,100 voters had a margin of error of plus or minus 2.9 percentage points. 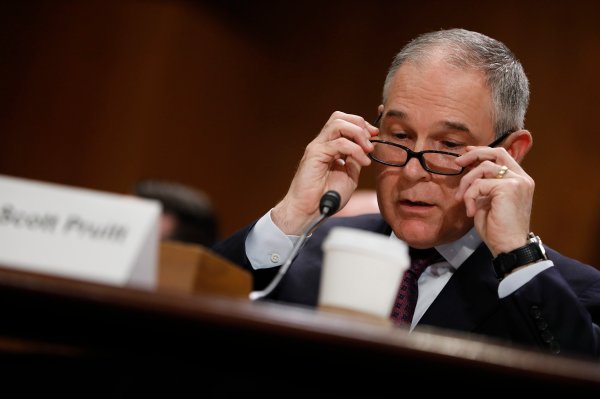 Bush EPA Chief 'Worried' About Agency Under Scott Pruitt
Next Up: Editor's Pick