President Trump’s nomination of Neil Gorsuch to the Supreme Court set off a storm of ads, spending and pressure from outside groups, but a few Democratic Senators are feeling the squeeze more.

Ten Democratic Senators are up for re-election in 2018 in states that Trump won. So as lobbying gets under way for and against Gorsuch’s nomination, these lawmakers are in a uniquely uncomfortable position, torn between their base and their home-state voters.

“They have a choice in front of them,” explains Carrie Severino, policy director of the conservative Judicial Crisis Network. “Are they going to align themselves with the liberal fringe of their party, or are they going to represent what the voters in their states clearly chose in the last election?”

Judicial Crisis Network is one of numerous activist groups on both sides of the aisle that are now pumping resources into pressuring Senators about the nomination, with a special focus on what many see as those 10 Democrats most vulnerable— Sherrod Brown of Ohio, Claire McCaskill of Missouri, Heidi Heitkamp of North Dakota, Bill Nelson of Florida, Joe Donnelly of Indiana, Jon Tester of Montana, Bob Casey of Pennsylvania, Joe Manchin of West Virginia, Tammy Baldwin of Wisconsin, and Debbie Stabenow of Michigan. Judicial Crisis Network is running broadcast, radio and digital ads in multiple states, and Severino is appearing on radio and television shows as their grassroots organizers pick up around the country.

There are two main aims of these lobbying efforts. One goal for conservative groups would be to get Democratic Senators to support Gorsuch’s nomination, although Republicans have the votes to confirm Gorsuch themselves. They have a simple majority with two to spare, as they showed in the Betsy DeVos fight. But Democrats could throw up a hurdle by taking the rare move of filibustering—requiring Republicans to get to 60 votes to end debate and hold a vote. To get to 60, Republicans would need eight Democrats to break ranks and vote for cloture. That’s where conservative groups think some of the 10 red-state Democrats could be persuaded. Conservatives argue the Democrats could mollify Trump voters in their home states by not engaging in a filibuster, but appease their own base by ultimately voting against Gorsuch in the confirmation vote. Heitkamp, for example, has already said she’ll oppose a filibuster.

McClatchy reports that there is a group of conservative organizations planning a multi-million dollar effort, including rallies, phone banks, direct mail campaigns and advertising, to confirm Gorsuch, with a special emphasis on the red-state Democrats.

“[They] need to be very concerned, given how high a priority this was,” Marjorie Dannenfelser, the head of the anti-abortion rights group Susan B. Anthony List, told McClatchy of Trump voters’ expectations for a conservative justice.

But for every conservative group, there’s a liberal organization pushing back against those same senators with the opposite message.

Marge Baker, executive vice president at the liberal People For the American Way, said they are specifically targeting their efforts to counter the Judicial Crisis Network.

“There’s some senators who are kind of under attack from the other side already, and so we’re going to obviously want to pay special attention to folks who are getting hit from the other side with this huge advertising campaign,” she said. People For the American Way is already running ads in 14 states, eight of which are the home states of the 10 vulnerable Democratic Senators.

“It’s full steam ahead,” echoes Nan Aron, founder and president of Alliance for Justice, a liberal judicial advocacy group. The Alliance for Justice is preparing a report on Gorsuch’s record, producing ads, making calls to Senators and organizing on the ground in states across the country.

“It’s probably pretty obvious that much of our focus will be on Senators who are up for reelection in those 10 states,” says Aron. “I think they would think I’m stupid if that weren’t what we were doing. We plan to win this fight.”

But the stakes are high for those 10 Senators, facing crushing pressure from both sides of the aisle. Filibuster and potentially appear obstructionist and they could lose their Senate seat next year. Vote against a filibuster or appear too soft on the Trump Administration, they could lose support and funding from liberal groups.

“If there’s a [Senator] that thinks they should go it their own and vote for one of these nominees or not stand for the filibuster, then they’re the ones that are putting themselves at risk for whether or not they’ll be re-elected,” warns Charles Chamberlain, executive director of progressive PAC Democracy for America. “Because we’re not going to be helping that.” 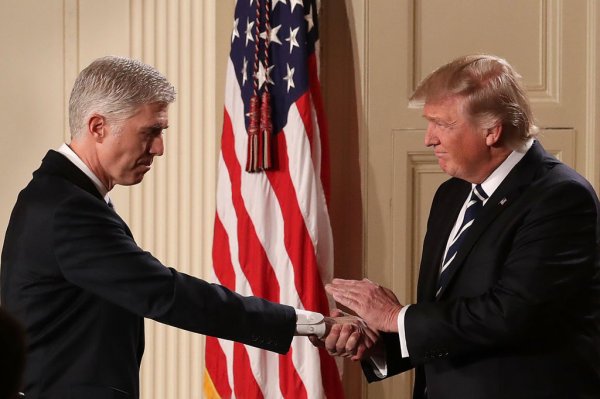