It was a busy night for the 20-year-old refugee from Syria, who was the center of attention at a gathering of the Syria Supper Club, a group dedicated to welcoming refugees through meals.

Aljizawi is one of many refugee women from Syria who have connected with their new homes and earned money by cooking and sharing traditional food with neighbors in the U.S. and Canada. Through the Syria Supper Club, the women profit from making buffet-style dinners for the specific cause of pushing back against Islamophobia and xenophobia which they say was exacerbated by President Donald Trump’s election.

“I’m afraid to go outside because, with the current political climate and Trump, I’m afraid we’ll be sent home, back to a war zone,” Aljizawi, who now lives in New Jersey with her husband, said. “The U.S. is very nice, it’s very beautiful, but we’ve gone through a lot of pain here.”

The Syrian civil war has displaced about 11 million of the country’s residents, sending more than 10,000 to the U.S. and 40,000 to Canada. Prior to coming to the U.S., Aljizawi lived in Egypt for a few years. Although she did not comment on too many details about her earlier life in Syria, Aljizawi said she learned to cook traditional Syrian fare from her mother around the age of 17, while living in Egypt.

Throughout the evening, dinner guests paid their compliments to the chef, marveling at her varied cooking skills at such a young age. Unlike American food, Syrian cuisine — typically heavy on vegetables or halal meat — involves a myriad of dishes, often equalling the amount people in the U.S. make for holidays like Thanksgiving. The more than 20 dishes that night were nothing, Aljizawi said.

“You should see what it’s like at Ramadan,” she said, describing the nearly endless amounts of food she and her family would eat in Syria at the end of the Islamic holy month of fasting.

A little shy at first, Aljizawi blossomed as the dinner went on, helped along by her translator Asma Alqudah, a student at Montclair State University. By the end of the meal, giggles punctuated the corner of the dining room occupied by the young women, who spoke animatedly in Arabic and took a bunch of selfies. Alijzawi said her ultimate goals were to cook for her family and take care of her house, once she feels fully settled into her new home.

Apart from the risks of Islamophobia, other challenges have made life in the U.S. difficult for Aljizawi. Her house is too small and in rough condition, the rent is too high and she and her husband don’t have adequate benefits, she said. The money she takes home from the dinners helps while he looks for a job. Dinner guests buy tickets for $50 to attend the meal, and the money goes to the Syrian women to buy the required groceries. They keep the remainder, as part of the fundraising efforts of the club.

Started by Kate McCaffrey and Melina Macall, the Syria Supper Club opens up opportunities for refugees and aims to push back against Trump. The women, who became involved in the project through Montclair’s Bnai Keshet synagogue, have organized approximately 30 dinners so far, with 15 just in January, as the club grew in popularity. About 30 refugees have cooked the dinners, and different dinner guests volunteer to host the events.

Trump weighed on every guest’s mind at the Feb. 5 dinner, held in the days after a federal judge issued a stay on his executive order on immigration that banned travelers from seven Muslim-majority countries, including an indefinite ban on Syrian refugees. Many people see the ban as anti-Muslim, and breaking bread with refugees already in the U.S. became one way for Americans to rebel against the order, which has since been restrained by a federal appeals court in California.

The desire to connect with new neighbors, and help them have a full life has pushed Americans and Canadians in both countries to start pop-up restaurants and catering services that hire women to share recipes learned from oral tradition that may get lost in the upheaval of being displaced across the world.

In Toronto, Canada, Newcomer Kitchen invites Syrian refugee women to cook weekly meals, which are sold online for $20. Proceeds are shared among the cooks. The meals vary by week, but can include meat pies, tabbouleh, hummus, chicken, vegetables and, always, a traditional Syrian dessert.

“We want to celebrate that they hold the ancient knowledge of one of the oldest cuisines in the world,” co-founder Cara Benjamin-Pace said. “Our goal is not to train these women into line workers in the food industry. Our goal is to bring them together and celebrate them as women and in the community.”

It appears to have worked for three women who cook each week for Newcomer Kitchen. The trio have lived in Toronto for about a year and told TIME through a translator that they had been incredibly depressed before becoming involved in the project, but felt much happier now as a result of joining a close-knit community. One cook, Amina Alshaar, said she hesitated about joining because had not been “exposed to such types of experiences.” As a housewife, cooking one meal for her family could be exhausting, but at Newcomer Kitchen, she felt a renewed energy.

“I stay here for seven hours and I’m very happy. I’m not tired at all,” Alshaar said.

Khadija Alibrahim, another cook, said her family was shocked that she wanted to work now that she lived in Canada; they came around when they saw how satisfying it was to her. “I became very happy to gather among other women,” she said. “If I didn’t join this type of social project, I wouldn’t have had the chance to be familiar with the types of social events that the kitchen holds.”

Ghada Neemat said she cooks at the kitchen every week to avoid being alone. Neemat, 32, said she lost her father, brother and at least three cousins in the war.

“The chance to meet Cara and getting involved in the activities of the kitchen really helped,” Neemat, who is now pregnant, said. “I was totally depressed before, but feel so much better now.”

Canada’s welcoming refugee policy shocked the women, some of whom were greeted personally at the airport by Prime Minister Justin Trudeau when they arrived. Alshaar said she would need “maybe 10 days” to fully express her opinion on Trump’s travel ban.

“This is not expected of the President of the United States,” she said of Trump’s executive order, which caused thousands of people to be detained in airports the day after he signed it. “How did they elect him?”

Benjamin-Pace said Newcomer Kitchen has reached out to women in particular because they tend to “be left behind” once their families settle into new homes. While men tend to find jobs and the children attend local schools, the women stay home and become isolated.

“It’s almost like their lives don’t pick up again. If you empower women, the overall development in the family is much higher,” Benjamin-Pace said. “Women in Syria, of course, have a very strong and powerful role. We’re not trying to change them. We want to celebrate everything that they are.” 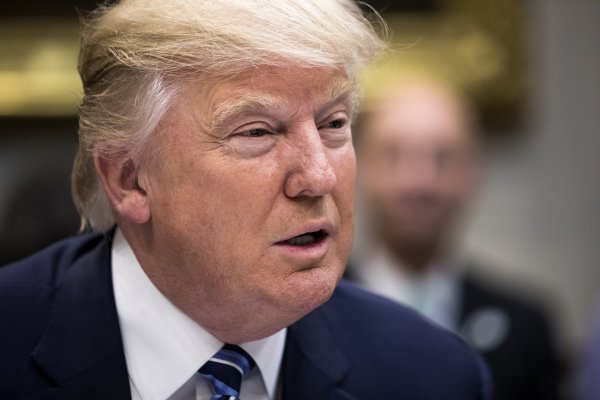 Donald Trump Is Alienating His Most Valuable Allies
Next Up: Editor's Pick