How the Valentine's Day Heart Got Its Shape

“It didn’t mean love before the 13th and 14th centuries,” says Eric Jager, author of The Book of the Heart and medieval literature professor at UCLA. When the shape was drawn before that point, it was generally for decorative purposes, he says, citing the enamel at France’s Musée de Cluny (c. 1300) as one prominent example. As the idea of romantic love began to take shape during that medieval period, so did the symbolism.

“[People at the time] thought of our hearts as books of memory, a place where God’s commands are written, and [believed] feelings for the beloved were somehow written on your heart,” says Jager. There were stories imagining “female saints whose hearts are said to be cut open after their death, and inside their hearts are inscriptions indicating their love for God or Jesus.”

So it makes sense that the heart shape was linked to actual hearts. Carlos Machado, a cardiologist and medical illustrator, says that familiar shape does somewhat resemble the four chambers of the heart, if it is cut open, or the image of the heart that appears in echocardiograms. But the shape is even closer to the look of a bird or reptile heart — which makes sense, he says, given that the study of anatomy before the 14th century was based on the dissection of animals. It is thought that the Catholic Church objected to the dissection of the human body during the Middle Ages.

Le Roman de la Poire (circa 1255), the first illustration of a heart in Europe not in an anatomical textbook
The Shape of the Heart by Pierre Vinken. Elsevier, 2000.

By the middle of the 14th century, “virtually all representations of the heart show it being held by the tip, with the base pointing upwards, thus conforming to its actual position in the thoracic cavity,” according to The Shape of the Heart, by the late Pierre Vinken, former co-chairman of the company that publishes the medical journal The Lancet. He identifies the first non-medical European illustration of a heart in a drawing that accompanied the medieval French love poem Le Roman De La Poire by Thibaut, written circa 1255. It is believed that the poem is the source of the idea that a person in love can “give” his or her heart to the beloved, the way the lover in the poem gives away a pear.

Even then, the heart in question wasn’t quite the shape that’s recognizable today.

Francesco Barberino's Documenti d'amore, circa 1320
The Shape of the Heart by Pierre Vinken. Elsevier, 2000.

“In the Middle Ages, the pine-cone-shaped heart was represented with a rounded base,” Vinken wrote in a 2001 article published in The Lancet. “It was only during the early years of the 14th century that the scalloped shape of the St. Valentine heart, with a fold or dent in the base, made its appearance.”

The more familiar modern heart shape appears to have come on the scene from the Italian didactic poem Documenti d’amore by Francesco Barberino, a Florentine jurist, that went viral in the 14th-century. One of its illustrations — depicting a naked cupid standing on the back of a galloping horse throwing arrows and roses at bystanders — included hearts. Shortly after its publication, the scalloped heart began appearing in other works of visual art and in tapestries.

About 150 years later, in the early 15th century, the tapestry “Le don du Coeur” (“The Gift of the Heart,” now at the Louvre) depicted a man holding a small red heart. That image became one of the most popular representations of “courtly love,” rules about love that governed behavior at Europe’s aristocratic courts and was channeled into literature and poetry. (Vinken cites another example that can be seen at the Metropolitan Museum of Art: a small 14th-century oak coffer depicting Frau Minne, the German goddess of love, aiming an arrow at a young man.) In the Middle Ages, heart-shaped books were also popular, corresponding with the idea of the heart as a place of memory. (Here’s an example at the Bibliothèque Nationale.)

So, by that point, the heart had taken its shape and had come to mean love — just in time for the organ to lose some of its symbolic importance in the human body, as the popular understanding of medicine evolved. The idea of the heart as the spot where feeling was literally recorded lost some of its power. “The brain takes over,” as Jager puts it.

Jager argues the fact that this image and metaphor has stuck around — an example of “iconographic inertia,” a term popularized by the essayist Nicholson Baker — shows that, at least when it comes to love, some things don’t change so easily.

“We’re still, in a sense,” he says, “medieval creatures.”

Correction: The original version of this article misstated the name of the museum that houses 14th-century enamel with heart shapes. It is Musée de Cluny, not Cluny Abbey. 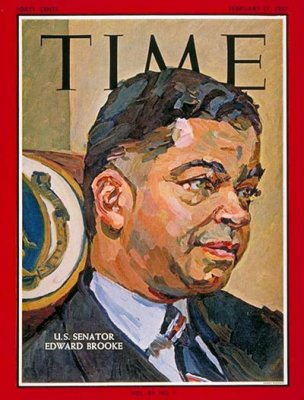 50 Years Ago This Week: The First Popularly Elected Black Senator
Next Up: Editor's Pick