President Trump promised bold changes to the way the country handles energy and the environment to create “trillions in new wealth” and a “flood of new jobs.” But three weeks into his Administration, many in the oil and gas industry say his agenda still seems unclear.

While Trump has moved quickly to unravel a raft of environmental regulations, questions remain on major issues for the energy industry such as his tax policy, level of support for renewable energy and how he’ll approach international trade.

Observers say the executive orders and regulatory rollbacks so far have been minor.

“Those things are really small compared to the other things coming up,” says Ethan Ziendler, head of Americas and Policy at Bloomberg New Energy Finance, of the Trump’s initial executive orders. “We’re really in early days with so many unanswered questions.”

How Trump will approach tax reform and trade policy rank as perhaps the biggest uncertainties for oil and gas companies. Republicans in Congress have proposed a border adjustment tax that would require companies to pay a 20% tax on products imported rather than produced domestically. U.S. oil production has skyrocket in the past decade thanks to fracking, but the country still imports some 5 million barrels of crude daily.

Jack Gerard, who heads the American Petroleum Institute, said last month that the industry is “concerned about it” though API has not taken an official position, according to a Financial Times report.

The Administration’s approach to renewable energy sources like wind and solar power could also play a role in shaping the future of U.S. energy, and the Trump administration has offered little indication how it might act. Energy Secretary nominee Rick Perry oversaw rapid growth in renewables during his time as Texas governor and renewables remain popular with many Republicans in Congress.

Perhaps most important way Trump can shape the future of renewables is with federal incentives, including an investment tax credit set to ratchet down incrementally beginning in 2019. Renewable energy deployment will continue regardless of tax credits as the cost of solar and wind continue to decline, but tax credits provide obvious incentives to move away from domestic coal and natural gas (though it could free up more natural gas for export).

The lack of direction has sunk in with friends and foes alike. Senator Lisa Murkowski, the Alaska Republican who heads the Senate’s Energy and Natural Resources committee, told Politico in late January that Trump’s team did not offer a direction on energy at the GOP’s recent retreat. “I figure my job as chairman of the energy committee is to remind them of the significant opportunities that we have within the energy space and why it’s important to put it at the top of your priority list,” she said. (Murkowski’s office did not reply to a request for comment on her remarks).

But for energy companies actions from Washington pale in comparison to market forces that no one entity can control. Trump can sign as many executive orders as he likes and Congress can pass laws, but the federal government cannot account for fluctuations in oil prices, advances in technology and a global push for decarbonization.

“The things that are going on are beyond Trump,” says Robert McNallly, an energy advisor in the George W. Bush White House. “Both Trump and whoever else would have won are being pushed around my structural and market forces.”

Nonetheless deregulation still ranks as a priority for most oil and gas companies, and that’s one area where Trump has been very clear about his intentions. He has worked with Republicans in Congress to undo several environmental regulations and promised to undo President Obama’s Clean Power Plan which mandates states come up with plans to reduce carbon emissions from power plants. Trump has also removed barriers to the Dakota Access and Keystone XL pipelines (though many energy experts remain skeptical that the latter ever be completed).

“What he has done so far may help on the margin, it may lower the cost of bringing a barrel to market,” says Jason Bordoff, an Obama energy advisor who runs Columbia University’s Center on Global Energy Policy. “But it makes a relatively modest difference.” 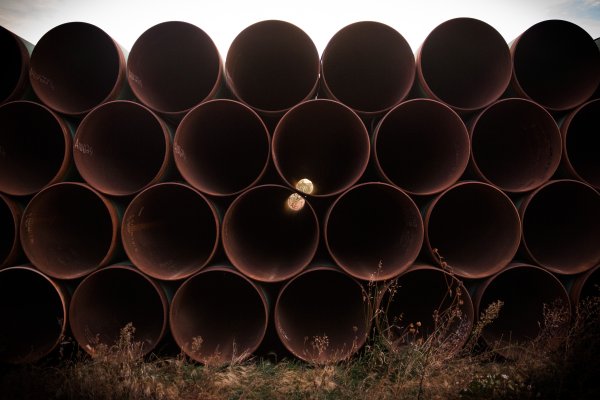 President Trump Kept This One Obama Regulation Because It Makes Approving Pipelines Easier
Next Up: Editor's Pick