After the New England Patriots completed their historic 34-28 comeback win over the Atlanta Falcons in Super Bowl LI, Patriots tight end Martellus Bennett told reporters he would skip the team’s ceremonial visit to the White House now that it’s occupied by President Donald Trump. It appears he won’t be alone.

On Monday, Patriots defensive back Devin McCourty told TIME he, too, will skip the congratulatory trip. “I’m not going to the White House,” McCourty wrote in a text message to TIME from the team bus. “Basic reason for me is I don’t feel accepted in the White House. With the president having so many strong opinions and prejudices I believe certain people might feel accepted there while others won’t.”

McCourty said he believed attending the event is a personal choice and “I can’t imagine a way I go there.”

Bennett and McCourty would not be the first pro athletes to sit out the presidential photo-op. But their decision has taken on particular resonance because of the very public ties between Trump, Patriots owner Robert Kraft, coach Bill Belichick and quarterback Tom Brady. Although they are three people most responsible for the current Patriots dynasty, Bennett said after the Super Bowl that he is not worried about potential backlash from the team.

Bennett and McCourty have been active in the player protests against racial and economic inequality sparked by San Francisco 49ers QB Colin Kaepernick, raising their fists following the national anthem before a September game. “If you see something you feel is wrong in society, why not help out? Why not try to raise awareness?” McCourty said to TIME then.

Their protests are the latest in a wave of high profile pro athletes taking stands against the Trump administration. The NBA star LeBron James refused to stay at a Trump hotel when his team visited New York in December, and the Dallas Mavericks, Milwaukee Bucks and Memphis Grizzles have also reportedly opted to stay elsewhere.

The typically sunny team White House visit has been turned into a political forum before. Tim Thomas, the MVP of the 2011 Stanley Cup Finals, refused to join his Boston Bruins teammates at the White House under President Barack Obama. “I believe the Federal government has grown out of control, threatening the Rights, Liberties, and Property of the People,” Thomas explained on Facebook. “Because I believe this, today I exercised my right as a Free Citizen, and did not visit the White House. This was not about politics or party, as in my opinion both parties are responsible for the situation we are in as a country. This was a choice I had to make as an INDIVIDUAL!”

In 2013, Baltimore Ravens center Matt Birk skipped the White House visit after Baltimore won that year’s Super Bowl because of Obama’s support for Planned Parenthood. “I am Catholic,” Birk reportedly said. “I am active in the pro-life movement, and I just like I couldn’t deal with that. I couldn’t endorse that in any way.”

In October of 2008, President George W. Bush honored Henry Cejudo, who won a wrestling gold medal in Beijing, and his fellow U.S. Olympians. Cejudo says he valued the visit and wouldn’t turn down a similar invitation from Trump even though his parents were undocumented immigrants from Mexico and Trump made tightening immigration a centerpiece of his political appeal. “I would be there to build a bridge, rather than to build a wall,” says Cejudo.

How many athletes will see it like Cejudo? We have four years to find out. 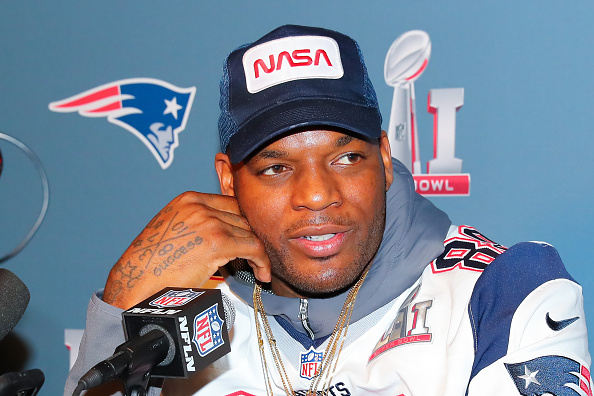 Patriots Player Speaks Out Against Trump: 'America Was Built on Inclusiveness'
Next Up: Editor's Pick