Two dogs, rescued from a puppy mill, huddle up in their cage in the back of a truck on Feb. 2, 2013.
Colin McConnell—Toronto Star/Getty Images
By Melissa Chan

A leading U.S. animal advocacy group on Monday threatened to sue the federal government after the Agriculture Department suddenly pulled “invaluable” information from its website regarding animal welfare at thousands of facilities across the country.

The Humane Society of the United States sent a letter to the Justice Department, saying the group would pursue legal action if the Agriculture Department did not reverse its recent decision to discontinue a search tool that made inspection records and violations at animal facilities publicly accessible.

For more than a decade, anyone could check government regulation of how animals are treated at about 9,000 zoos, circuses, research laboratories, dog breeding operations and other facilities on the department’s Animal and Plant Health Inspection Service (APHIS) page. Up until late last week, the site also let potential dog owners look up specific breeders by license number and see any possible violations under the breeder’s name before buying the animal.

Now animal watchdogs, who had relied on the public database for more than a decade to hold dog breeders and animal handlers accountable, fear violations and abuse will run rampant at the facilities without the public keeping a careful eye on them.

“I’m very concerned that there will be no incentive for breeders or research labs or any of these facilities to comply because the public won’t know,” said Elizabeth Oreck, national manager of puppy mill initiatives for Best Friends Animal Society, a national nonprofit to end the killing of dogs and cats in U.S. shelters.

The Humane Society said the Agriculture Department must make its inspection records at animal research facilities public under a court order. The animal organization had sued the government in 2005 over public access to the reports and won a settlement in 2009 that directed the Agriculture Department to post certain data on its website related to research on animals. That information, the Humane Society said, was among the data that was just purged from government website.

The USDA did not comment on the Humane Society’s threat of legal action. In a statement explaining its change late last week, APHIS cited a “comprehensive review” of public information on its website.

“Based on our commitment to being transparent, remaining responsive to our stakeholders’ informational needs, and maintaining the privacy rights of individuals, APHIS is implementing actions to remove documents it posts on APHIS’ website involving the Horse Protection Act and the Animal Welfare Act that contain personal information,” the statement said.

APHIS said the information could be requested through Freedom of Information Act submissions — a process that advocates said could take years to yield results.

The Humane Society said it has used the USDA’s now-removed database to cull timely reports on animal abuse, which have led to puppy mills being shut down. The reports also prompted several states to push for legislation regulating dog breeders, Pacelle said.

“The posting of these documents has been an invaluable tool in rooting out some of the worst abuses that are occurring,” he said. “Essentially, this is now going to give a bit of a get-out-of-jail card to horse soring, puppy mills, delinquent roadside zoos and animals research labs that are flouting the law.”

Oreck said she was shocked to discover that she could no longer access the information. “I was not alone in feeling absolutely bewildered,” she said. “I was devastated and despondent and yet inspired to just fight even harder for animals. We have to. They don’t have anyone fighting for them. They deserve that.” 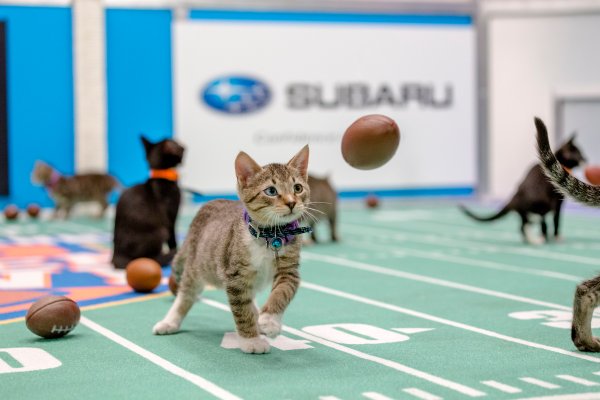 Meet the Adorable Cats Competing in Sunday's "Kitten Bowl"
Next Up: Editor's Pick