Queen Elizabeth's 65 Years on the Throne, in 65 Numbers

By Kate Samuelson and Zamira Rahim

The Queen, who is the world’s longest-reigning monarch, plans to celebrate the historic anniversary in private, at her Sandringham Estate in Norfolk, east of the U.K., while royal gun salutes will commemorate the occasion across London. Here, a look at her 23,742 days on the throne in 65 numbers:

1.3 million
The number of people who signed a petition calling for President Donald Trump’s state visit to be cancelled “to avoid embarrassing Queen Elizabeth”

2
The Queen owns two Corgis (Holly and Willow). She also has two Dorgis (Vulcan and Candy), which are a cross between a corgi and a dachshund

2.2 billion
The number of people that live in a Commonwealth country (a group of 52 nations, of which 16 have the Queen as Head of State), across all six continents

4
The Queen has four children in total: Charles, Anne, Edward and Andrew

5
The value in pounds of a coin minted this year to celebrate the Queen’s anniversary. The equivalent in U.S. dollars would be $6.24

5.4
The number of feet and inches tall that the Queen is

In 1981, a teenager was arrested for firing six blank cartridges at the Queen as she rode on horseback before the Trooping the Colour ceremony

8
The number of grandchildren that the Queen has: Peter, Zara, William, Harry, Beatrice, Eugenie, Louise and James

12
The number of U.S. presidents the Queen has met with over the years

13
The number of U.K. prime ministers who have held office since the start of the Queen’s reign. The first was Winston Churchill (1951-55), the latest is Theresa May

15
The number of Commonwealth nations, excluding the U.K., that share Queen Elizabeth II as their Head of State. Each of these nations are governed separately

16
The age of the Queen when she registered with the Labour Exchange, a British employment agency, as Princess Elizabeth

30
The number of the Queen’s godchildren

31
The number of years ago that the Queen became the first British monarch to visit China, in 1986

33
The length of time the Queen did not visit Wimbledon from the 1970s until quite recently. In 2010, she made her first visit to Wimbledon since 1977, for an Andy Murray match

39 million
The estimated value, in dollars, of the Queen’s jewellery, sapphires and all

41
The number of guns used for a salute by the King’s Troop Royal Horse Artillery in London’s Green Park on Feb. 6 at 12pm local time to celebrate the Sapphire Jubilee

63
The number of official speeches the Queen has delivered at the opening of the U.K. Parliament

65
On Feb. 6, the anniversary of the day she became Queen, Elizabeth II will have reigned for 65 years

77
The age of Queen Victoria when she became the last and only other British monarch to celebrate her Diamond Jubilee (60 years), in 1897. She died four years later.

83
The number of public engagements the Queen undertook on her Diamond Jubilee U.K. regional tour in 2012

85
The number of years ago that the first Royal Christmas address was made. The 1932 speech was written by Rudyard Kipling and delivered by the Queen’s grandfather, King George V

89
The number of horses that will pull six First World War-era field guns into position in Green Park to mark the Sapphire Jubilee on Feb. 6

96
The number of rubies in the Queen’s Burmese tiara

101
The age that the Queen’s mother, Elizabeth Angela Marguerite Bowes-Lyon, died at in 2002

130 million
The reported cost, in dollars, of Netflix’s series The Crown, which tells the Queen’s story beginning with her marriage

187.25
The amount, in dollars, that people paid for tickets for a picnic lunch held to celebrate the Queen’s 90th birthday in June 2016. There were torrential downpours that day

237
The number of roads in the U.K. named after the Queen

302
The Queen’s ranking in the list of richest people in the U.K. by the Sunday Times newspaper

314
The number of years ago that the core of Buckingham Palace, the Queen’s official London residence was built. It was originally designed to be the country home of the Conservative Party politician and poet John Sheffield

425 million
The monarch’s estimated net worth, in dollars

457 million
The amount, in dollars, that is estimated to be spent on a Buckingham Palace refurbishment program that will last 10 years

775
The number of rooms in Buckingham Palace

2,868
The number of diamonds in the Imperial state crown

5,000
The number of breeding pairs of mute swans in Britain that are officially owned by the Queen

7,000
The estimated number of telephone calls that Buckingham Palace receives per week

10,000
The number of guests at the street party that was held for the monarch’s 90th birthday

17, 420
The number of pieces of mail the Queen received during the week of her 90th birthday

50,000
The number of guests, on average, that are invited every year to garden parties, dinners and other events hosted by the Queen

90,000
Approximately the number of Christmas puddings the Queen has given out to staff, continuing the custom of King George V and King George VI

170,000
Roughly the number of telegrams the Queen has sent to centenarians in the U.K. and Commonwealth.

230,873
The Queen’s designated number in the Women’s Auxiliary Territorial Service, which she joined during World War Two

249,500
The amount, in dollars, that the Queen sued The Sun newspaper for after it published a leaked copy of her Christmas broadcast in 1992

Correction: The original version of this story misstated the year of Queen Elizabeth II’s coronation. It was 1953, not 1952.

Write to Kate Samuelson at kate.samuelson@time.com and Zamira Rahim at zamira.rahim@time.com. 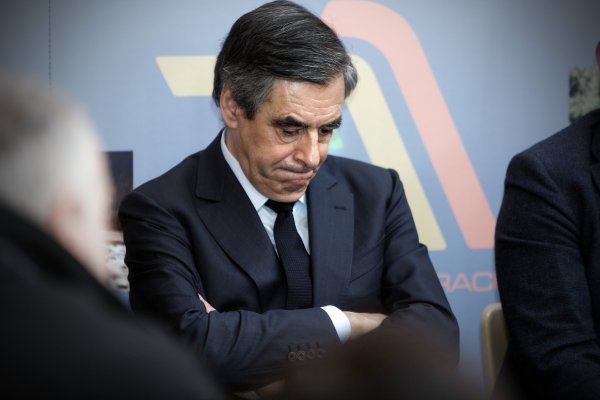 France's Election Is Becoming a Battle of Two Insurgents
Next Up: Editor's Pick