With François Fillon in the Gutter, France Can Expect a Battle of Insurgents

Until just 10 days ago, the easy frontrunner to be France’s next president was François Fillon, a conservative Republican and former Prime Minister, whose straight-ace family values and strong anti-terrorism plan promised a steady hand, after five rocky years of the deeply unpopular François Hollande.

But the past weekend showed just how unpredictable the results will be in this spring’s French elections, a vote that could drastically impact Europe, and perhaps parts beyond. Far from being the man to beat, Fillon has been brought low by scandal—so much so that on Sunday, his rivals barely mentioned him during a two-day campaign blitz of mass rallies, where the major candidates hammered away at each other in front of thousands of people, with barely any talk of the recent frontrunner.

Fillon surged in polling in late 2016, as he barnstormed through France pushing for belt-tightening measures, including cutting 500,000 civil-service jobs. Then, in late January, the weekly investigative paper Canard Enchaîné revealed his wife Penelope had earned €900,000 over a period of 12 years, while Fillon was a French Senator and then Prime Minister, for an assistant’s job she appeared never to do, as well a contributor to a literary journal whose editor did not recall her. Fillon also hired two of his five children for seemingly phantom jobs, paying them about €84,000 in additional funds. Then last Thursday, Britain’s Telegraph newspaper released a 2009 videotaped interview with Penelope Fillon, in which she said she had never worked for her husband.

Although Fillon has denied wrongdoing, there seems little way to recover. “We cannot present a program demanding sacrifices from everyone, especially people at the bottom of the pyramid, and still preserve the privileges of those at the top,” the centrist politician François Bayrou, who is not running for president, said in a radio interview on Sunday. On Monday, Fillon apologized for the “error” of employing his wife but insisted he would not drop out of the race.

Voters already seem to have made their minds up, however. Although Fillon is due to meet party officials on Tuesday morning to discuss his campaign, about 69% of people told Sunday’s Journal du Dimanche that they wanted him out of the race. “It is a real catastrophe,” Frédéric Dabi of the polling agency Ifop told the paper, which says Fillon’s only chance is that “the right [Republicains] has no Plan B.”

Fillon’s woes mean France’s two major parties face an uphill battle to reach the second, decisive round of voting on May 7. The Socialists have been tarnished by Hollande’s disastrous performance and are represented by far-left candidate Benôit Hamon, whose nomination has split the party.

Instead, two candidates linked only by their claims to represent a popular insurgency are emerging as the frontrunners: the far-right National Front leader Marine Le Pen; and Emmanuel Macron, a former Rothschild banker, just 39, who speaks fluent English and who was Hollande’s former Economy Minister until September, when he quit the government to launch his presidential bid as an independent candidate. His self-styled political movement “En Marche!” (Forward!) uses themes of hope and change that have seen him compared in some circles to Barack Obama.

At a huge rally in Lyon on Saturday with at least 8,000 people, Macron seemed to recognize the new shape of the campaign by aiming his attacks at Le Pen, accusing her of couching the National Front’s raw nationalism within a message of supporting regular French workers. “Some today pretend to be talking in the name of the people, but they are just ventriloquists,” he told his impassioned audience, referring to Le Pen’s new campaign slogan, “Au nom du Peuple,” or “in the name of the people.”

“They don’t speak in the name of the people, they speak in the name of their bitterness,” Macron said. “They speak for themselves, from father to daughter and daughter to neice.” Le Pen’s father Jean-Marie founded the National Front during the 1970s as a virulently anti-immigrant party; he was indicted in the past on charges of anti-Semitism, for calling the Holocaust a “detail of history.” Her niece Marion Maréchal Le Pen is the Front’s only member of parliament, the youngest ever deputy elected.

Le Pen, for her part, offered a message seemingly inspired by that of U.S. President Donald Trump. At a mass rally in Lyon to mark the official launch of her campaign, she pounded a “France first” theme, promising to free the French from “the yoke” of “Islamic fundamentalism,” to negotiate much greater autonomy for France within the E.U., or otherwise to hold a referendum on a Frexit if Europe rejects her demands. Immigrants to France would need to adapt to French culture, or “stay back home,” she said. She also promised to stop manufacturing jobs leaving the country, and to “relocalize” industry. “We are for local, against global,” she said, bringing her audience to their feet in chants of “Présidente Marine! Présidente Marine!”

That no longer seems like an impossibility. For years, France’s establishment, both left and right, have joined to shut the Front out of the presidency. But on Sunday, Le Pen made it clear she intended to scrub her campaign of the party’s past. There was no sign of her father in the packed hall. Absent too was any sign of Le Pen’s family name, or even the name of the political party she heads. On stage she stood in front of a sign that read simply “Marine 2017.”

Scandal has reshaped this race, and may do so again. There are signs Russian hackers might attempt to manipulate the election, as they did in the U.S., perhaps in favor of Le Pen, who advocates closer ties with Moscow. Wikileaks has said it possesses thousands of compromising documents on the candidates, and last week published a 2012 document that showed Macron inviting Hillary Clinton operatives to an event in Paris, perhaps an attempt to tie him to the political establishment. The documents could embroil Le Pen, too, however; she too is under investigation for hiring staff for phantom jobs in Brussels, in her job as a member of the European Parliament. Few would predict what comes next, in a race that has so far defied expectations. 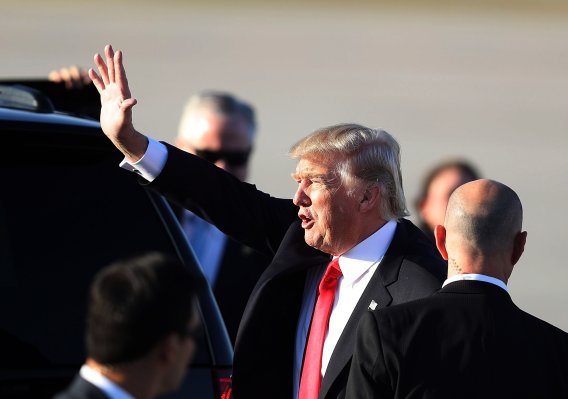 NATO Leaders Will Meet With Trump in May
Next Up: Editor's Pick