Whether you were rooting for the New England Patriots or the Atlanta Falcons during Super Bowl LI, or you were just there for the wings and Lady Gaga’s epic halftime performance, there was one thing that everyone could agree on and that’s that football is truly America’s favorite pasttime.

This year’s epic Super Bowl showdown brought out the fierce loyalties of Patriots and Falcons fans and celebrities were no exception. From Mark Wahlberg’s family affair to John Legend and Chrissy Teigen noshing on game day snacks, celebrities were more than ready to get down for the Super Bowl.

Thankfully for us, they thoughtfully documented it all on social media — see the best celebrity Super Bowl celebrations below.

Ludacris and Andre 3000 couldn’t have been more excited for their beloved Falcons.

Chrissy Teigen was more excited about the Super Bowl snacks than the game itself.

Usher told fans that he had been waiting for the Falcons’ moment since he was five years old.

Donatella Versace and her muse Lady Gaga hung out before the halftime show; Versace provided the wardrobe for Gaga’s epic performance.

2 Chainz and Usher hit up the sidelines before the game.

Migos gave a motivational speech to the Falcons before the game.

Chris Evans took to Twitter (and his caps lock) to share his excitement about the outcome of the game.

Gisele Bündchen and her daughter were Tom Brady’s biggest fans during the game.

T.I., Young Jeezy, and Ludacris showed off their ATL pride in Houston.

Luke Bryan was stoked to perform at the game.

While Lady Gaga fully embraced the sports aspect by warming up in her own custom football gear.

Win or lose, it was a good weekend for Gucci Mane.

Lil Yachty met his heroes when Outkast was reunited at the game.

Ellen DeGeneres congratulated both teams on a game well-played.

It was all celebrations for Jenny McCarthy’s house after the Patriots’ win. 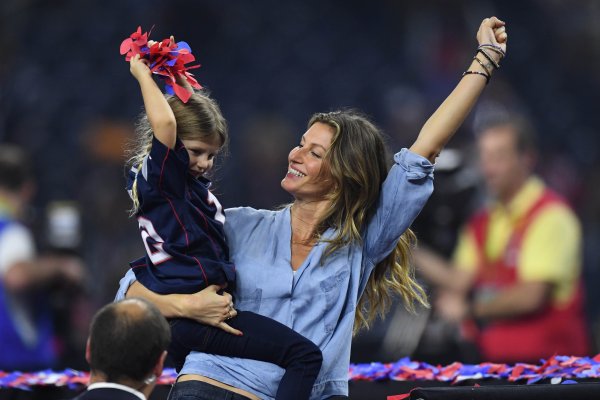