Lady Gaga’s Super Bowl halftime show stands as among the very best in the history of the form, racing ambitiously through the artist’s entire career and putting forward the qualities of the artist that just work. It was alternately deeply felt and archly ironic, overblown to the point that the camera didn’t know where to look. It was the artist in full—perhaps the purest expression of what Gaga’s fans like about her.

Lady Gaga came into the Super Bowl as an act on a bit of a downswing, with her album Joanne having been met with reserved critical notice and no real hit single. Worse still, after her booking came a contested election result and the expectation that she—never an overtly political performer beyond specific, easily understood causes—might somehow “get political” in some undefined manner. I’d argue that her lack of a statement was the statement: America’s problems are not Gaga’s to solve, and she has every right to want Trump voters to buy “Bad Romance” on iTunes.

But perhaps the best argument against malaise at large is working hard to put forth as much quality and energy as one can. Her performance began with a performance of “God Bless America” and “This Land is Your Land” that felt less substantial than the declaration of independence that followed—a pop star unbound by the usual rules of gravity, stadium safety and good sense. Any singer could probably have trained enough to have pulled off Gaga’s aerial stunts, but few would have been so bold to open the show with them. Similarly, few in possession of a famous civil-rights anthem (in Gaga’s case, the LGBT-equality song “Born This Way,” a tune that feels less hokey now than it did upon release) would have uncorked it third in the setlist. Both Katy Perry and Madonna—recent headliners and no slouches in the spectacle department—saved their big statements for the show’s final moments.

It was all dopey, earnest fun, an escape from tough realities studded with crystal scepters (for “Telephone”) and, gloriously harkening back to the early days of Gaga’s career, a key-tar (“Just Dance”). Indeed, the halftime show felt like a moment for Gaga to return to the basics, and not in the way she did with her faux-roots music reinvention on last year’s album. At its core, pop music has an uncomplicated, primal appeal—to make you dance and make you feel. Gaga was smart enough, in a setting that bears endless temptations to pile on visual distractions, to actually strip down her act to the fundamentals. Even the absence of Beyoncé, a guest vocalist on “Telephone,” seemed to work in Gaga’s favor; the world-encompassing pop icon who dominated two recent halftime shows and the week’s news cycle might have dwarfed the relatively humble ambitions of the act.

Toward the end, she flirted with taking this simplicity too far, as in her “Million Reasons” performance, oddly led into with a question as to whether the audience was feeling good. (We were, Gaga—but this is a breakup anthem, so…) But she always managed to keep the audience from looking at their phone screens, studding that same performance with shout-outs to her parents that managed to seem anything but gratuitous, and a final moment, in which the singer strode into the crowd and hugged an audience member while crooning the word “Stay.” Was it a reference to the refugee crisis and recent legislation, or just a moment of affection? We probably won’t find out anytime soon, but the moment was perfectly pitched for trying times: Tinged with oddity and tension and resolved through humanity and grace.

In her final number, “Bad Romance,” she performed a facsimile of her camp-classic music-video dance so close that it actually read poorly on such a big stage—but the eye could be drawn upward, endlessly, by the fireworks blowing up above Houston’s NRG Stadium. Or it didn’t matter, and the striving efforts of a group of dancers going as hard as they possibly could have, in the service of a message of inclusivity, was enough of a statement for tonight. It may not have been political—but it was worth heeding all the same. 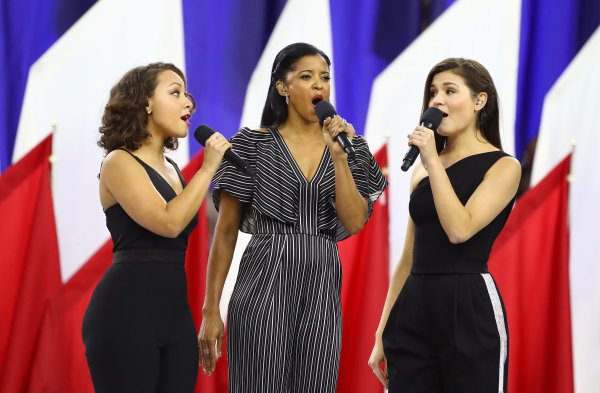