President Donald Trump on Saturday morning lashed out at a court ruling that temporarily blocked his executive order on immigration, which barred people from seven Muslim-majority countries from entering the U.S.

“When a country is no longer able to say who can, and who cannot , come in & out, especially for reasons of safety &.security – big trouble!” Trump said in a tweet. “Interesting that certain Middle-Eastern countries agree with the ban. They know if certain people are allowed in it’s death & destruction!”

U.S. District Judge James Robart in Seattle temporarily blocked Trump’s immigration order on Friday night, ruling that the state of Washington had “met its burden in demonstrating immediate and irreparable injury.” The ruling, which applies nationwide, will temporarily allow visa holders from the seven affected countries to enter the U.S.

“The opinion of this so-called judge, which essentially takes law-enforcement away from our country, is ridiculous and will be overturned!” Trump said in another tweet, specifically targeting Robart, who was appointed by former President George W. Bush in 2003.

Trump’s executive order, which sparked immediate backlash, met legal challenges in several states in the past week. But Robart’s ruling on Friday was the most far-reaching. 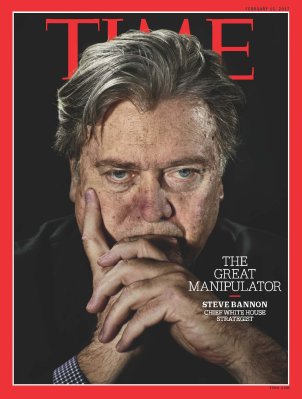 See Steve Bannon's Life in Pictures
Next Up: Editor's Pick