This So-Called Natural Cure Can Cause Heart Attacks and Strokes

Drinking high-concentration hydrogen peroxide is a tactic sometimes promoted in alternative medicine circles as a so-called “natural cure,” but nearly 300 people have been poisoned and five have died after trying it, according to a new paper published this week in the Annals of Emergency Medicine.

Dr. Benjamin Hatten, assistant professor of emergency medicine at the University of Colorado School of Medicine, used data from the National Poison Data System collected between 2001 and 2011 and looked specifically at poisonings from hydrogen peroxide solutions of 10% or more, with most cases involving concentrations of 30% to 40%. These formulas aren’t usually sold in drug stores, and are generally marketed for industrial or commercial purposes. But they’re also sold by some alternative health retailers and promoted as an ingredient in what’s sometimes referred to as “super water.”

“For people who follow these regimens, the instructions involve placing a dropper-full of high-concentration peroxide into a large quantity of water or another liquid, so it’s fairly diluted,” says Dr. Hatten. “People believe that it’s hyper-oxygenating, putting extra oxygen into your beverage, and that it somehow improves your health.”

There’s no scientific basis for these claims, though. “If it’s properly diluted, it’s probably harmless,” says Dr. Hatten, “but it doesn’t have any proven benefits—and if you accidentally take too much, it could have very serious consequences.”

There could also be serious consequences if someone else in the household accidentally drinks non-diluted peroxide, not realizing the danger. Many of the cases in Dr. Hatten’s report were from people who unknowingly ingested a mouthful or more of peroxide. Often, he says, it was stored undiluted, in an unmarked bottle, in the refrigerator.

Dr. Hatten was surprised to find that severe chemical burns in the throat and stomach were rare in patients hospitalized for peroxide ingestion. Rather, he says, most cases of severe injury or death were due to heart attack or stroke.

“Oxygen bubbles from the peroxide can enter the bloodstream and block off blood flow to the brain or the heart,” he says. “This paper shows that our focus as health care providers, at least initially, should be evaluating and treating these possible embolisms.”

Some of these patients improved after they received hyperbaric oxygen therapy, the same type of treatment used for scuba divers who return to the surface of the water too quickly and get the bends. But this didn’t work for everyone, especially those who weren’t treated right away.

The hydrogen peroxide most people have in their medicine cabinets—the kind that comes in a brown bottle—is usually only 3% to 5%, Dr. Hatten says, and isn’t nearly as dangerous.

“If you take a swallow it might burn a little bit, but it’s probably not going to cause health problems,” he says. The same goes for swallowing a little bit of toothpaste made with hydrogen peroxide, he adds.

As for the stronger stuff, Dr. Hatten says it should never be ingested, under any circumstances. If it is kept in the home, he recommends adding a coloring agent to the liquid so it can’t be mistaken for water. And always store it out or reach of kids and pets, use a child-resistant cap, and be sure it’s clearly labeled. 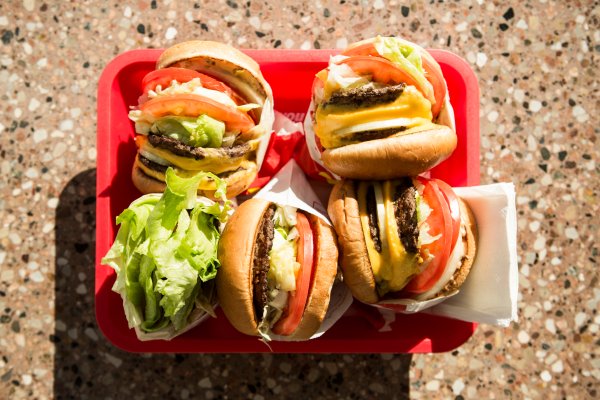 Here's Another Reason to Avoid Fast Food
Next Up: Editor's Pick