This Is What It's Like To Sleep in Tom Brady's Pajamas

Tom Brady #12 of the New England Patriots is surrounded by the media after defeating the Seattle Seahawks 28-24 during Super Bowl XLIX at University of Phoenix Stadium on February 1, 2015 in Glendale, Arizona.
Tom Pennington—Getty Images
By Sean Gregory

That Tom Brady guy lives a charmed life, no? On Feb. 5, the New England Patriots quarterback will play in his record seventh Super Bowl. With a win over the Atlanta Falcons, he’ll set another record: a fifth win, the most Super Bowl titles for a starting quarterback. He’s married to one of the most famous women in the world. He’s quite the healthy eater.

And now, he’s trying to put a weary country to bed.

That’s the pitch, anyway, from Under Armour. At technology confab CES in January, the company announced the release of “UA Athlete Recovery Sleepwear Powered by TB12.” Or, as I like to call it, “Tom Brady’s jammy pants.”

Brady helped Under Armour develop the product, which features a bio-ceramic print able to produce far infrared energy when combined with the body’s natural heat. (Brady, a sleep fanatic who’s said he aims to get bed by 9:00 p.m. during the season, also starred this surreal spot for Beautyrest, the mattress brand). Far infrared can improve circulation and reduce inflammation: one 2009 study showed that rheumatoid arthritis patients reported decreases in pain and stiffness during infrared sauna treatment.

But will pajamas really help you sleep? Under Armour swears they’ve tested the product, and that it works.

I decided to try for myself. The “recovery sleepwear” includes both a top (long sleeve or short sleeve) and bottom (pants or shorts). They each cost $99. A $200 sleep aid better actually put you to sleep.

You can pre-order the product online, but it doesn’t ship until late February. A store in New York City, however, had the pants in my size, but not the shirt. I bought a pair of pants, and an on-site rep told me that if I ordered the shirt online in the actual store, Under Armour could ship it to me the next day, Saturday, for an extra $25. Deal. Need sleepy.

So I wore the pants to bed last Friday night. They’re extremely comfy, no doubt. However, I woke up at around 3 a.m. Saturday morning and was unable to fall back asleep. My insomnia, however, had its perks. I tuned into the Australian Open final between Serena and Venus Williams, which began at 3:30 a.m. ET. Serena won, breaking Stefi Graf’s record for most Grand Slam singles titles in the Open Era — Serena now has 23. Serena and Venus exchanged gracious words after the match; it was a magical moment, I’m glad I caught the entire match. So thanks, Tommy?

The shirt didn’t arrive on Saturday. I called a customer service rep, who said that one-day shipping didn’t apply to my zip-code, but I’d get the shirt Monday. He refunded the $25 shipping fee, which was nice.

So I was stuck with just the pants last weekend. Wearing them over the following two nights, I noticed one key improvement. I have a fairly brittle lower back, and a couple of weeks ago I tweaked it playing basketball. After a day of extreme discomfort — I couldn’t stand upright — the injury steadily improved. But I had some persistent soreness. After a few nights in the pajamas, however, my back felt great.

Ever since I first herniated a disc about three years ago (an injury that kept me off the weekend warrior hoops court for over a year), I’ve followed a stretching routine, designed by a physical therapist, to prevent and reduce back pain. I have no idea whether the stretching or the pajamas were more responsible for my comfort. All I can say is that when I combined both, my lower back felt great.

I also went for a run 3-mile run Saturday to test the “recovery” claim. My legs felt relatively strong the next few days.

But the “sleepwear” wasn’t helping me sleep. After falling asleep on Monday, I woke up in the middle of the night again. I figured the shirt would help. Covering your entire body in infra-red pajamas — and spending the full $200 — should give you a better shot at slumber, right? Sadly, the shirt didn’t come on Monday. Turns out that I was given bad information again: the pajamas couldn’t be shipped until late February. I asked Under Armour to send me a pair. On Wednesday night, they arrived. I was up late the night before. I was exhausted. And now, I was wearing Brady’s full pajama set. If there was any night Under Armour was going to put me out for a solid eight hours, it was this one.

I woke up in the middle of the night again. Come on, Tom!

Maybe no pajamas can conquer bad habits. I wasn’t able to follow all six of Brady’s tips for a better sleep, which come the garments, like “be consistent with bed time.” Writing deadlines muck with that. He also says to shut down your digital devices 30 minutes before sleep and quiet the mind. This week was busy, so my mind raced a bit late at night. Plus, I snuck a peak at my cell phone here and there. Need to check those fantasy basketball scores! And I had imbibed a tiny bit on the weekend. Nothing much, but alcohol can interrupt sleep patterns.

Still, I expected more, given the Brady stamp of approval, and the price. Despite being so snug, I don’t think I’d drop $200 on the outfit, knowing what I know now. Plus there are other ways to get a better sleep. Personally, I’m going camping. Tom, you in? 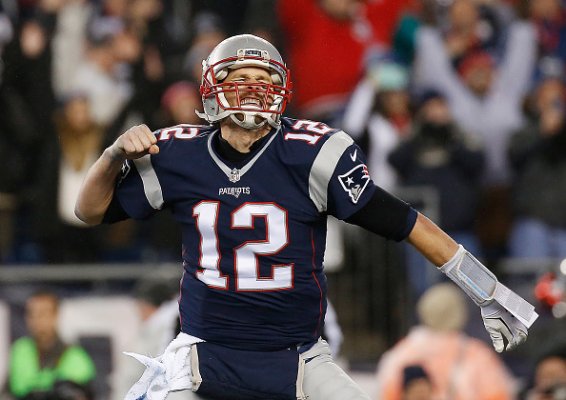 The Internet Is Going Crazy Over Tom Brady's Ridiculously Huge Coat
Next Up: Editor's Pick