As the eastern Ukrainian town of Avdiivka continues to see a fierce surge in violence, many here believe they are the victims of a geopolitical test of wills.

Rebel forces shelled the town’s main humanitarian aid station late on Thursday, according to Pavlo Zhebrivskyi, the head of the civil and military administration of Donetsk province, killing two and injuring a third person. The total dead is now at least 15, according to reports, since hostilities between pro-Russian separatists and Ukrainian forces began ticking up on the frontline on the outskirts of town early on Sunday morning.

Fighting is now at the most intense level it has been in many months, and Avdiivka is caught in its orbit. Near a section of one-story wooden houses here, the shockwave of outgoing artillery and the strange whistle of mortars could be felt and heard from the street. Staff from the UN Refugee Agency slowly patrolled the dirt lane, inspecting damage from the day before when projectiles from a multiple rocket launcher hit the area, turning wooden roofs into kindling and leaving sharp dark holes in the ground – stark against the white snow.

In the bloodshed of the past few days, many here see the Kremlin testing its limits with newly-elected President Donald Trump. “There is a direct link between the fighting in Avdiivka and the election of Trump. The separatists wanted to test the reaction of the new administration,” volunteer soldier Leonid Martsun told TIME, outside of a command post on the edge of the town, as a scarred and dirty Ukrainian tank ground through the snow of the parking lot. “Putin needed to know how strongly Trump would react,” said Dmytro Linko, a parliamentary deputy who had come down from Kiev on Wednesday to observe the operations.

This thinking seems to run in parallel to leaders in Washington. “That this surge of attacks began the day after he talked with you by phone is a clear indication that Vladimir Putin is moving quickly to test you as a commander in chief. America’s response will have lasting consequences,” wrote U.S. Senator John McCain, in a letter to Trump on Thursday. “Vladimir Putin’s violent campaign to destabilize and dismember the sovereign nation of Ukraine will not stop unless and until he meets a strong and determined response.”

A man shows where one of six grad rockets landed in his backyard in Avdiivka, Ukraine, on Feb. 1, 2017.
Brendan Hoffman—Getty Images

Trump himself has so far said nothing about the violence, but his newly-appointed U.S. ambassador to the U.N., Nikki Haley, sent a clear message in her maiden speech to the body’s security council. “We do want to better our relations with Russia,” she said. “However, the dire situation in eastern Ukraine is one that demands clear and strong condemnation of Russian actions.”

Putin, on the other hand, accused Ukraine of provoking the surge in violence to win the support of the White House, while speaking to reporters during a visit to Hungary on Thursday.

The conflict between pro-Russian separatists and Ukrainian forces in the country’s east began after Russia annexed Crimea in March 2014, and has killed at least 9,000 so far. Though a nominal ceasefire has been in place since Feb. 11, 2015, both sides have continued to shell and shoot across the buffer zone. This dramatic escalation, however, is creating a fresh humanitarian crisis.

On Thursday afternoon, the main aid station in central Avdiivka was thronged as hundreds of people came to collect warm clothing and blankets, a hot meal and hygiene supplies after recent fighting cut off the town’s water, power and heat as residents faced freezing temperatures hovering in the low teens.

More than a hundred people stood in line to register for assistance from Caritas, an aid organization, their breath rising into the freezing air, frosting the fur on the front of the caps. Noisy arguments continuously broke out at the front of the line as armed soldiers let small groups of people through to sign up.

“We are here because people don’t have heat, water, or electricity,” said Father Andrei Buvakh, of Caritas. “Right now we’re providing food, warm clothing and hygienic boxes. This is very important because there is no water. The situation has been like this for a while now, but it gets worse when there is more shooting,” he said of the war, which began in early 2014 and has left nearly 10,000 dead and millions displaced.

Residents carry boxes of humanitarian aid on sleds across the street after a night of shelling in Avdiivka, Ukraine, on Feb. 1, 2017.
Brendan Hoffman—Getty Images

After struggling through the line, Nina Volkova sat down inside the heated tent and registered, but became frustrated after learning she could not register her husband for assistance and that he would have to come stand in line and sign up himself. More than that, however, it is the continued violence that makes her the angriest. “I’m a construction worker,” said the 60-year-old. “I spent my whole life building the buildings they’re destroying now. I laid the bricks,” she said, as she left the tent. “I don’t know who ordered this, I just know it is bad.”

Dumitru Lipcanu, the head of the regional UNHCR field office, described dire conditions in the town. “Infrastructure has been severely damaged including water, heating and power. People now remain in their homes without the basic conditions of survival,” he said. “Local authorities are doing their best. If the power goes back on, the people will be better – but, more than they need assistance, the people want the ceasefire back.” 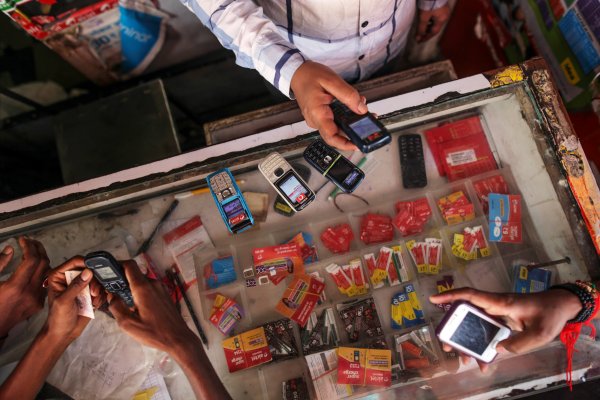