President Donald Trump speaks at the beginning of a meeting with lawmakers in the Roosevelt Room of the White House Feb. 2, 2017 in Washington, D.C.
Brendan Smialowski—AFP/Getty Images
Ideas
By James C. Nelson, John Bonifaz
Nelson is a retired Justice of the Montana Supreme Court and a member of the Legal Advisory Committee for Free Speech For People. Bonifaz is the co-founder and president of Free Speech For People.

It has been widely acknowledged that, upon swearing the Oath of Office, President Donald Trump would be in direct violation of the foreign-emoluments clause of the U.S. Constitution.

Never heard of the foreign-emoluments clause? You’re not alone. It’s tucked away in Article I, Section 9, of the Constitution. It’s clause number 8. It states, in pertinent part: “… no person holding any Office of Profit or Trust under [the United States], shall, without the Consent of the Congress, accept of any present, Emolument, Office or Title of any kind whatever, from any King, Prince or foreign State.”

This clause was included in the Articles of Confederation and, later, in the Constitution itself. It was borne out of the Framers’ obsession with preventing in the newly minted United States the sort of corruption that dominated 17th and 18th century foreign politics and governments — characterized by gift-giving, back-scratching, foreign interference in other countries and transactions that might not lead to corruption but, nonetheless, could give the appearance of impropriety.

Where Trump runs afoul of the foreign-emoluments clause is that, first and foremost, he is a businessman with significant financial interests and governmental entanglements all over the globe. Indeed, as Norman Eisen, Richard Painter and Laurence Tribe stated at the Brookings Institution, “Never in American history has a [President] presented more conflict of interest questions and foreign entanglements than Donald Trump.” Moreover, Trump’s businesses dealings are veiled in complicated corporate technicalities and lack transparency.

The Trump Organization does or has done business in Argentina, Azerbaijan, Bermuda, Brazil, Canada, China, Egypt, Georgia, India, Indonesia, Ireland, Israel, Panama, Philippines, Qatar, Russia, Saudi Arabia, South Korea, St. Martin, St. Vincent, Turkey, United Arab Emirates, United Kingdom and Uruguay. And, while serving as President, Trump, through his interest in the Trump Organization, will continue to receive monetary and other benefits from these foreign powers and their agents.

Examples of existing business arrangements that constitute violations of the foreign-emoluments clause include: China’s state-owned Industrial and Commercial Bank of China is the largest tenant in Trump Tower, and the state-owned Bank of China is a major lender to Trump. Trump’s business partner in Trump Tower Century City in Manila, Philippines is Century Properties, which is run by Jose Antonio, who was just named special envoy to the United States by the president of the Philippines. Further, many Trump Organization projects abroad require foreign government permits and approvals, which amount to substantial financial benefits that also constitute foreign emoluments.

Presidents and public officers often utilize blind trusts so as not to violate the foreign-emoluments clause. A truly blind trust involves an arrangement wherein the public officer has no control whatsoever over the assets placed in the trust — that means no communications with, from or about the trust, and no knowledge of the specific assets held for his benefit in the trust. In the case of Trump’s ownership in the Trump Organization, this could be achieved only by a complete liquidation of the assets, with the proceeds to be invested by an independent Trustee, without Trump’s involvement or knowledge. Trump’s decision to continue the business of the Trump Organization, continue to maintain his substantial ownership of the organization and turn the management of it over to his children, is woefully inadequate in addressing the emoluments clause.

Worse, taking the position that the foreign-emoluments clause doesn’t even apply to him, Trump has stated that: “I can be President of the United States and run my business 100 percent, sign checks on my business.” And: “The law is totally on my side, meaning, the president can’t have a conflict of interest.”

To address this unprecedented corruption of the Oval Office and this threat to our Constitution and our democracy, we believe Congress must move forward now with an impeachment investigation of President Trump. More than 575,000 people from across the country have already called for this, joining a new campaign launched moments after President Trump took the Oath of Office. The President’s possible conflicts of interest have become increasingly apparent.

In the meantime, instead of starting to “make America great again,” the 45th President should read the Constitution and “make the President honest again.”

After all, he swore to uphold the Constitution. 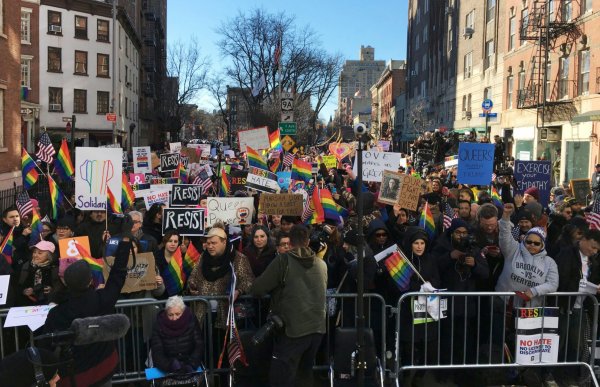 Protesters at Stonewall Inn Show Solidarity With Refugees
Next Up: Editor's Pick