People are seen in the Kutapalong Rohingya refugee camp in Cox's Bazar, Bangladesh, on Jan. 21, 2017. More than 65,000 Rohingya Muslims have fled to Bangladesh from Myanmar since October last year, after the Burmese army launched a campaign it calls "clearance operations" in response to an attack on border police on October 9, believed to have been carried out by Rohingya militants.
Allison Joyce—Getty Images
By Ian Bremmer

Middle East refugees are once again in the spotlight, following President Donald Trump’s executive order placing an indefinite hold on Syrians seeking asylum in the U.S.

But the story of the world’s beleaguered goes far beyond those caught up in the latest political firestorm. According to the U.N., there were 65.3 million “forcibly displaced” in the world in 2015—a record high. That number, of course, continues to grow.

It’s not just Syria and other conflict zones better known in the West driving these numbers, however. These five countries form part of the broader story of the world’s ongoing refugee crisis:

The Democratic Republic of Congo (DRC) declared its independence from Belgium in 1960. Blessed—and cursed—with vast natural resources and mineral wealth, violence has been a hallmark of the republic for as long as it has existed; its first prime minister was assassinated in 1961. Under strongman Joseph Mobutu, who seized control of the country in 1965 and renamed it Zaire (a name that lasted till 1997), the country stabilized economically but stalled democratically.

By the 1990s, the genocide in neighboring Rwanda spilled over into the country and amid the chaos—along with the help of Rwandan and Ugandan forces—rebel leader Laurent-Desire Kabila launched the First Congo War (1996-97) and deposed Mobutu; Kabila was himself assassinated during the Second Congo War (1998-2003). All told, more than 5.4 million people have been killed over the past two decades; less than 10 percent of those are believed to be soldiers killed in direct combat. To date, more than 2 million Congolese have been displaced by fighting, and violence continues to flare in the eastern part of the country. According to the U.N, over half a million have sought refuge outside the country.

The decades of violence have taken a toll on both the politics of the country and its economics. Kabila’s son Joseph, who assumed the presidency following his father’s death, has stayed on past his electoral mandate while a transition is being “worked out.” The death this week of the 84-year old opposition leader, Etienne Tshisekedi, threatens an already shaky transition deal and there’s a real risk that it will lead to a resurgence of violence.

The Rohingya, an ethnic Muslim minority of 1.1 million that live in the Western part of Myanmar, make up a large part of the country’s 450,000 refugees. Because of race politics and a resurgence of Buddhist nationalism (87.9 percent of the country is Buddhist), the Rohingya continue to be denied citizenship by Myanmar’s government. Many have fled to neighboring Asian countries like Bangladesh, Malaysia and Thailand. Persecution of Rohingyas range from violence perpetrated by civilians and/or security forces to restrictions on employment, travel, and worship, as well as a general lack of economic opportunity. The result? Radicalized Rohingya Muslims ransacked police barracks in the past six months, and just this past weekend a high-level government advisor, Ko Ni, was assassinated at the international airport. A champion of religious tolerance, his death signals more religious strife on the horizon.

Or “the worst crisis most people have never heard of,” in the words of former U.S. Ambassador to the UN Samantha Power. The landlocked Central African Republic (CAR) has seen five coups since declaring independence from France in 1960, and even that grim statistic understates the turmoil that’s gripped the nation.

The most recent coup took place in March 2013, when rebel leader Djotodia led his Seleka forces to overthrow President Francois Bozize and install himself as the country’s first Muslim president (about 15 percent of Central Africans are Muslims, 50 percent Christian). Marching to power, his Seleka forces targeted Christians while sparing Muslims; Christian militias rose in response as the country descended into chaos. Djotodia managed to hold onto power for just nine months before being ousted himself, though the violence continues. Today, there remain over 470,000 Central Africans displaced of a total population of 5.5 million.

The displaced people of Eritrea are unusual in that the key driver of migration is not war or sectarian hatred, but compulsory military service. Originally, military service in Eritrea was supposed to be just 18 months, but it was extended indefinitely in 2002 as a way of providing free labor for government projects. According to the UN, Eritrean military service entails “arbitrary detention, torture, sexual torture, forced labor, absence of leave, and the ludicrous pay… an institution where slavery-like practices are routine.” It is not unusual to find adults serving the army into their fifties; the result has been a monthly exodus of roughly 5,000 people a month. Over 400,000 Eritreans (9 percent of the population) have already fled the country; as of 2015, Eritreans comprised the second largest group of refugees in Europe, second only to Syrians.

Colombian President Juan Manuel Santos won the Nobel Peace Prize last year for brokering a truce with the Revolutionary Armed Forces of Colombia (FARC) late in 2016. He earned that award—the decades of fighting between the guerilla group and the Colombian government have internally displaced 6.9 million people; as of 2015, the most in the world (edging out Syria by 300,000 people). Some 340,000 have fled beyond its borders.

A communist group that opposed the privatization of natural resources and the exploitation of the rural poor by the country’s economic elites, FARC rebels have been waging war on Bogota for nearly five decades; more than 200,000 people have been killed in those clashes. FARC was able to wage its war as long as it did thanks to financing created by Colombia’s booming drug trade; by 2013, it was estimated that 60 percent of Colombia’s drug trade was controlled by the FARC.

Obviously, the peace deal should have a positive impact on refugees and internally displaced over the long term. However, security troubles are far from over, given the presence of other groups like criminal bands (BACRIM) and the National Liberation Army (ELN) that are themselves engaged in drug trafficking and extortion. The ELN is about to begin peace discussions with the government; here’s hoping that FARC set a good precedent. 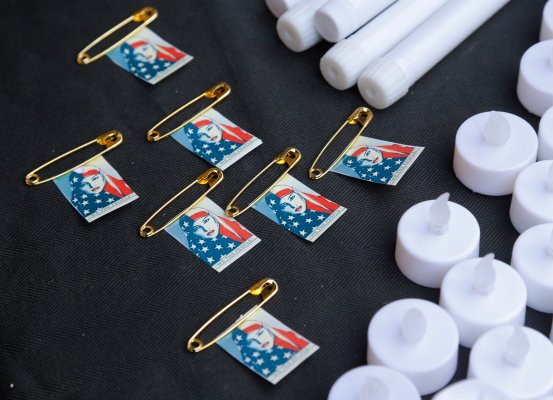 Vet Us, Check Us, But Do Not Deny Us a Home
Next Up: Editor's Pick