It took just 11 hours for Beyoncé Knowles to break Instagram’s record for the most liked photograph on the photo-sharing platform.

On Wednesday, the artist used an embellished portrait of herself to announce she is pregnant with twins. In the photograph, shot by artist Awol Erizku, she’s wearing a veil and kneeling in front of a large display of flowers, hands gently resting on her stomach.

For Phillip Prodger, head of photographs at the National Portrait Gallery in London, the image is a direct reference to the Madonna. “It’s a wonderfully clever blend of references, showing Beyoncé as a Renaissance Madonna,” he tells TIME. “With its arched garland of roses, it calls to mind one of my favorite paintings, the famous ‘Madonna in a Rose Garden’ painted by Martin Schongauer in Colmar, Alsace, in 1473. Whether Erizku was thinking of this specific picture I can’t be sure, but he is someone who is interested in art history and references Old Master paintings in his work.”

Down to the choices of flowers—roses and poppies—the photo includes elements that may symbolize important parts of Beyoncé’s life. “Roses are traditionally symbols of the Madonna, suggesting fertility, purity and chastity,” says Prodger. “Interestingly, the artist has added a few poppies to the garland as well, which usually symbolize remembrance and loss; I can only imagine this is a response to Beyoncé’s very public acknowledgment that she had a miscarriage in 2013.” In her 2013 HBO documentary, Beyoncé opened up about a miscarriage she suffered before the birth of Blue Ivy.

For Prodger, the portrait portrays both modesty and empowerment. “There is a tradition of showing Madonnas kneeling, but not like this—you sense Beyoncé’s power and determination, of being in control,” he says. “At the same time, her expression is just ambiguous enough that there is a hint of vulnerability, uncertainty; that despite her fame and strength of will, she understands there is something magical and deeply humbling about birth and motherhood. The way she holds her hands adds to this feeling—with the left hand, exploring, probing—with the right, supporting, comforting. It strikes just the right tone— a colorful celebration of life, with just enough ambiguity to tell us she knows what she is getting into.”

“Joy, yes—gratitude, definitely—uncertainty, a little,” he adds. “It’s a mix of emotions that I think pretty much any parent can relate to.”

See more photos from Beyoncé’s pregnancy album on her website. 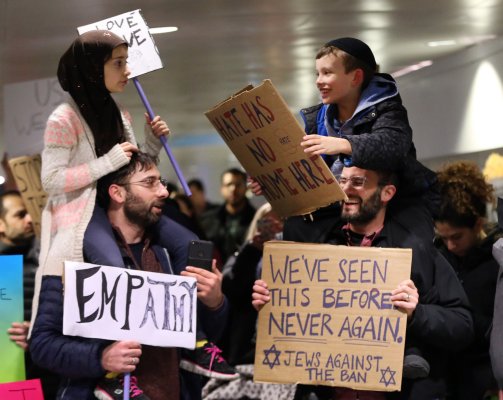 How a Photo of Jewish and Muslim Kids Protesting President Trump Went Viral
Next Up: Editor's Pick