Circa 1952, a group of 171 "illegal aliens" wave goodbye to the Statue of Liberty from the Coast Guard cutter that took them from Ellis Island to the Home Lines ship 'Argentina' in Hoboken for deportation.
Buyenlarge—Getty Images
By Olivia B. Waxman

On Monday, the San Francisco-based 9th Circuit Court of Appeals is expected to rule on whether to reinstate U.S. President Donald Trump’s controversial Executive Order on immigration, which temporarily prohibits refugees and citizens of seven predominantly Muslim countries from entering the U.S. (and blocks Syrian refugees indefinitely). In turn, the Department of Justice is expected to put out a filing defending the Order.

The case, brought by Washington and Minnesota, is just one of the legal challenges facing the order, which cites one particular law as the source of Trump’s authority on the matter: an Immigration and Nationality Act originally passed in 1952. In light of those challenges, historians say that it’s worth investigating the moment in time that produced that 1952 law—when the world was, according to Rebecca J. Scott, president of the American Society for Legal History, a “fearful, phobic” place.

At the time, the U.S. was embroiled in the Cold War and deep in the so-called “Red Scare,” the anti-Communist effort led by the zealous Republican Senator from Wisconsin Joseph McCarthy, whose quest to root out communist sympathizers included targeting immigrants. Espionage was a major concern of the era, as was the threat that foreigners might bring radical ideas into the country from outside. And so the sponsors of the 1952 Immigration and Nationality Act, Democrats Senator Pat McCarran of Nevada and Rep. Francis Walter of Pennsylvania, argued that the nation needed a new kind of immigration law for national security purposes.

The 1952 law tweaked but maintained the quotas established by the Immigration Act of 1924. And, though it eliminated the racial condition for citizenship that had long held back Asians, it set the new quotas in such a way that favored Western Europeans. A key provision, however, gave the President the ability to overrule those quotas.

President Harry Truman was one of its chief critics. He vetoed the law, which he called, in a message to Congress, “a slap at millions of Americans whose fathers were of alien birth” and denounced it for “substituting totalitarian vengeance for democratic justice.” It would be more appropriate, he argued, to “stretch out a helping hand” to those living under communism, not to worry about protecting the U.S. from them. But the law had enough support in Congress to override his veto.

By the next decade, however, things had changed. The Cold War was far from over, but the Red Scare had peaked. At the same time, another mass movement else had risen: the civil-rights movement. (The beginning of the end of McCarthyism came in 1954, a year that culminated in McCarthy’s fellow Senators voting to censure him.)

In 1965, President Lyndon B. Johnson signed an amendment to the 1952 law that changed the composition of immigration into the U.S. by eliminating discriminatory quota imbalances—a move that also led to the first limits placed on Latin American immigration—and stipulating that immigrants could not be denied a visa because of their race, sex, nationality or place of birth. “For over four decades, the immigration policy of the United States has been twisted and has been distorted by the harsh injustice of the national origins quota system,” Johnson said when he signed the law on New York’s Liberty Island.

The new law, however, did not create a wide-open door. It also did not specifically get rid of a clause that allows the president to deny anybody entry to the U.S. under special circumstances. “The way the law is written, it doesn’t matter what the reason is,” Mae Ngai, an immigration historian at Columbia University, explains.

There’s only a 13-year difference between 1952 and 1965, yet two very different Americas existed during those years. The American Society for Legal History’s Rebecca Scott calls the world that produced the 1965 legislation much more “inclusive” and “rights-conscious” than that of the early ’50s.

Some legal scholars argue that it’s not up to Trump to decide which of those periods is the best parallel for today. If Congress restricted the president’s ability to block immigration based on national origins in 1965, they contend, then Trump’s executive order must be illegal, though he is certainly not the first president to make use of Section 212(f) after 1965. In 1981, President Ronald Reagan used it to bar “any undocumented aliens arriving at the borders of the United States from the high seas,” while in 1986, he used it to bar Cuban nationals, with some exceptions. In 1994, Bill Clinton used it to bar anyone in the Haitian military or government affiliated with the 1991 coup d’état that overthrew the democratically-elected president. Ten years later, George W. Bush used it to bar corrupt members of the government of Zimbabwe from entering the U.S. And in 2012, Barack Obama used it to bar hackers aiding Iran and Syria.

Trump, however, appears to be the first president to apply a blanket ban to everyone from a specific country (more than one, in this case) since President Jimmy Carter used the provision to keep out Iranians during the Iran hostage crisis.

Whatever the upshot of the legal challenges to Trump’s order, some scholars say there’s nothing new about his recent actions.

“We’ve always been an immigrant nation and an anti-immigrant nation,” argues Jesse Hoffnung-Garskof, a professor of history and American culture at the University of Michigan. For much of the 20th century, he says, “there’s been tension between domestic politics that are trying to restrict in the name of populism, and it comes into conflict with a foreign policy agenda about engagement with the world.” 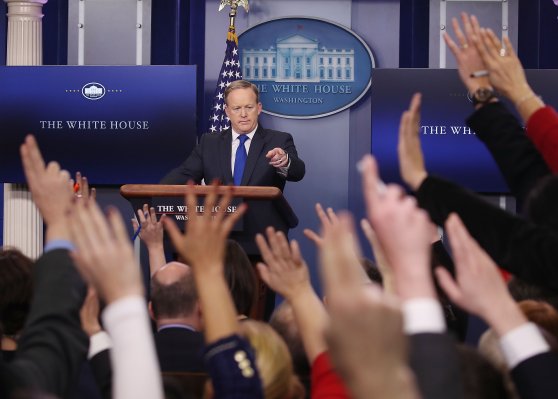