James Baldwin’s words have been cropping up with growing frequency in recent days: In movie award acceptance speeches and on posters at anti-Trump protests. In discussions on TV news programs and even the prelude to Madonna’s remarks at the Women’s March on Washington. And in tweet after tweet after tweet punctuated with the hashtag #blacklivesmatter.

It has been almost 30 years since the writer and social critic died, and though his words have never lost their potency, they have, of late, increasingly found their way into the airwaves (and twitter-waves) of mainstream popular culture. As a new generation discovers his work and older generations seek to revisit it, the timing couldn’t be more auspicious for director Raoul Peck’s new documentary I Am Not Your Negro, which uses Baldwin’s unfinished manuscript about the lives and assassinations of Medgar Evers, Malcolm X and Martin Luther King, Jr. as a launchpad for a conversation about race in contemporary America.

The documentary, which hits theaters Feb. 3, had a qualifying run in 2016 that made it eligible for an Academy Award nomination, which it received on Jan. 24. The category this year is rich with films that explore racism from different angles: Ava DuVernay’s 13th draws a straight line from slavery to mass incarceration and Ezra Edelman’s O.J.: Made in America uses the life of O.J. Simpson as a lens through which to explore race, celebrity and sport.

In I Am Not Your Negro, Samuel L. Jackson breathes life into the never published Remember This House, of which Baldwin had completed only 30 pages before he died. Peck places archival footage side by side with contemporary footage—Birmingham in the ‘60s, Ferguson in 2015—illustrating, though it’s already clear to so many, why the last 50 years don’t seem to have made Baldwin’s perspective any less necessary or relevant.

In the exclusive clip above, Baldwin appears on an episode of The Dick Cavett Show in 1968 to explain a damaging double standard of perception. When a white person picks up a weapon and demands freedom, he says, white people are quick to applaud him. When a black person does the same, he continues, white people don’t hesitate to criminalize him. Days after a national address on Black History Month, it wouldn’t be an overstatement to call Peck’s film required viewing. 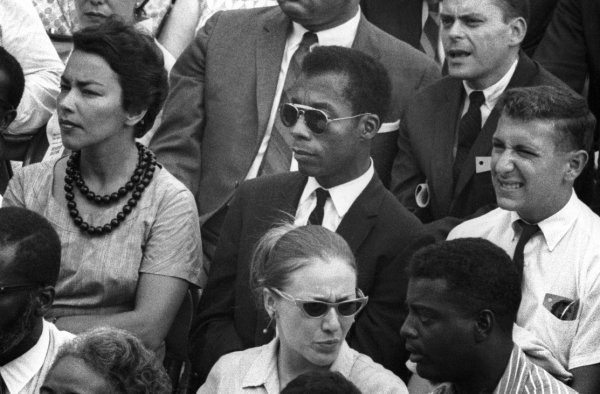 Review: I Am Not Your Negro Shows How Far We Only Think We've Come
Next Up: Editor's Pick