The Real Rick Grimes Is Finally Back on The Walking Dead

Warning: This post contains spoilers for the mid-season premiere of The Walking Dead.

After half a season of watching Rick Grimes consistently bow down to an enemy for the first time in The Walking Dead‘s six-year run, the leader returned to his defiant roots in Sunday night’s mid-season premiere.

The show opened with a mysterious sequence in which Father Gabriel was seen abandoning his lookout post before driving away with the remainder of Alexandria’s food supplies. The episode then picked up right where the mid-season finale left off—with Rick and crew banding together at the Hilltop.

Despite Gregory’s refusal to ally with the Alexandrians and go to war with Negan, several residents of Hilltop declared they were ready to join the cause. The group then took their case to Ezekiel at the Kingdom, where they were reunited with Morgan. Unfortunately, after taking the night to consider their proposal, Ezekiel also chose to remain neutral—a stance that will almost certainly change in the near future—but offered the escaped Daryl asylum in the Kingdom.

The episode’s best scene occurred as the group traveling back to Alexandria came across a blockade of cars rigged with a line of explosives that they proceeded to steal as a horde of zombies quickly approached. “We’re the ones who live,” a breathless Michonne whispered to Rick after the pair narrowly avoided death, presumably summing up the theme of the second half of the season.

However, the mood was quickly brought back down as the Saviors showed up almost immediately and began ransacking Alexandria in search of Daryl, making it clear that he would never be safe there again.

The episode ended with a rather cryptic sequence as the crew found a note reading “BOAT” left behind by Father Gabriel. Minutes later they were surrounded by a weapon-wielding group of yet-to-be-introduced survivors once they followed his clue—a series of events that for some reason made Rick smile. 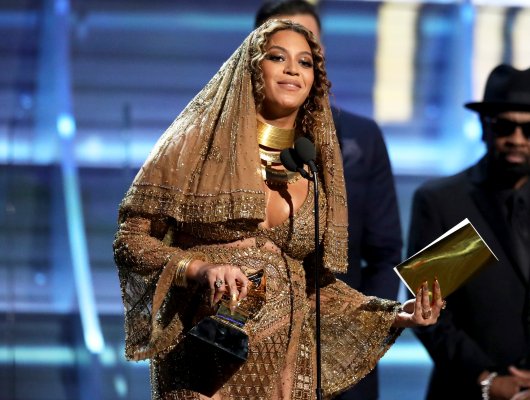 Read Beyoncé's Powerful Acceptance Speech From the Grammy Awards
Next Up: Editor's Pick