On Late Night, Seth Meyers turned his attention to President Trump’s executive order on immigration. The action was met with swift opposition from thousands who protested it as well as criticism from Barack Obama and some Republicans, while some of Trump’s supporters praised the action.

For Meyers, he dubbed the ban “cruel and unnecessary” and “very poorly thought out,” adding that in the video released by the White House, Meyers felt Trump appeared to be reading the executive order, which bans visitors including green card holders from seven predominantly Muslim countries, for the first time. “Hey man, it’s not comforting to us when you seem shocked by the stuff you’re signing,” Meyers said on his show on Monday night. “That’s the way people look before they sign the injury waiver on American Ninja Warrior.’”

In his “Closer Look” segment, Meyers commented, “Trump should be the first president who legally has to count to 100 before taking action.” Meyers noted that during the presidential campaign Trump frequently touted his “big heart” (“Or as my doctor calls it, ‘enlarged’,” according to Meyers), but on Late Night Meyers said, “people who actually do have a big heart don’t walk around bragging about it. I don’t remember Mother Teresa constantly going, ‘This is so nice of me, right?’” 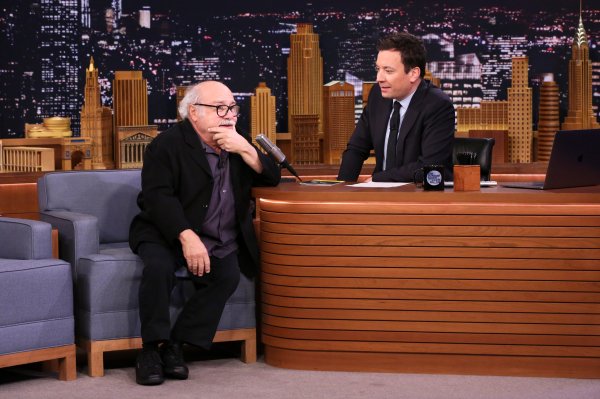 Danny DeVito Was There When Jimmy Fallon’s Mom Dared to Interrupt Robert De Niro
Next Up: Editor's Pick