What’s the German for “currency manipulator”?

President Donald Trump’s top trade adviser accused Germany of using an artificially cheap euro to gain an unfair advantage in world trade over the U.S. as well as other countries in the EU, re-igniting a long-festering argument over Europe’s common currency. It also adds to Trump’s criticisms of German Chancellor Angela Merkel’s policies on refugees and defense, widening the fault lines between the Western World’s two most powerful countries.

In e-mailed responses to questions from the Financial Times, Peter Navarro said Germany “continues to exploit other countries in the EU as well as the U.S. with an ‘implicit Deutsche Mark’ that is grossly undervalued.”

The comments will set alarm bells ringing in Berlin, reviving an argument often levelled at it since the birth of the euro in 1999: namely, that it has used the ballast of weaker countries in the euro zone to keep its exchange rate at a level far below where it would otherwise be. That gives exporters such as BMW and Siemens a crucial price advantage in ‘stealing demand’ from other countries like the U.S. or Japan. Germany says the surpluses only reflect the actions of private companies and citizens, rather than government policy.

In recent months, the euro has traded at its lowest level against the dollar in nearly 13 years, due to the fact that the European Central Bank has kept monetary policy loose to prop up the likes of Greece, Italy, and Portugal. That has made Germany’s exports even cheaper.

Germany’s current account surplus, which includes services as well as trade in goods, has soared ever higher in recent years, and is now larger than China’s in absolute terms. As a proportion of gross domestic product, it’s over three times as large as China’s, according to IMF data. That makes it, in some people’s eyes, one of the biggest macroeconomic imbalances in the world economy.

Elsewhere in his interview, Navarro said that the skewing of effective national exchange rates was one of the reasons he expected the mooted comprehensive free trade deal between the U.S. and EU (the Transatlantic Trade and Investment Partnership, or TTIP) to die a quiet death under the new administration.

“Brexit killed TTIP on both sides of the Atlantic even before the election of Donald Trump,” Navarro said, a nod to the fact that the U.K. had been the only major EU country unambiguously in favor of the deal.

Navarro, like Trump, believes that the U.S. has a better chance of improving its foreign trade with bilateral deals, rather than with multilateral ones like TTIP or the Trans-Pacific Partnership (from which Trump withdrew the U.S. last week by executive order).

“I personally view TTIP as a multilateral deal with many countries under one ‘roof’,'” said Navarro. “The German structural imbalance in trade with the rest of the EU and the U.S. underscores the economic heterogeneity within the EU — ergo, this is a multilateral deal in bilateral dress.”

Elsewhere in his answers, Navarro repeated the rationale behind Trump’s activist approach to reshore more value-adding manufacturing jobs to the U.S.

“It does the American economy no long-term good to only keep the big box factories where we are now assembling ‘American’ products that are composed primarily of foreign components,” he said. “We need to manufacture those components in a robust domestic supply chain that will spur job and wage growth.”

Navarro also rejected the charge that U.S. consumers would end up bearing the brunt of any tariffs imposed on imports in pursuit of that goal. He called that notion “an old and tired argument the globalist wing of the offshoring lobby has used for years to put Americans out of work and depress wages by shipping our jobs offshore”. 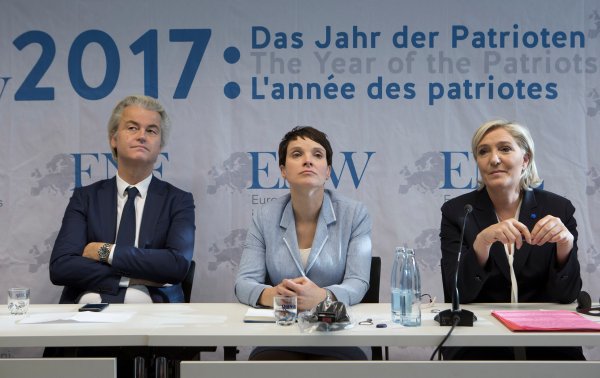 Europe's Far-Right Leaders Unite at Dawn of the Populist Era
Next Up: Editor's Pick